We had a very restless night last night. Scully was on edge all night and kept wanting to get up and look around the hotel room, and twice she wanted to go outside to toilet. So I had to get dressed in multiple layers of clothing to survive the polar temperature outside and take her out in the middle of the night. I don’t even know what time it was, but maybe midnight and around 2am. And in between she was almost constantly moving around or growling at noises outside in the street. I think overall I got maybe an hour or two of sleep.

My wife and I were up before 7am as Scully got up with the sun. I took her down to the grass across the street again for the usual morning toilet. After that I went for a walk a couple of blocks to the nearest supermarket to buy some muesli and milk for us to eat in the room for breakfast. I paused to take a photo of this gorgeous Art Deco hotel on the main street: 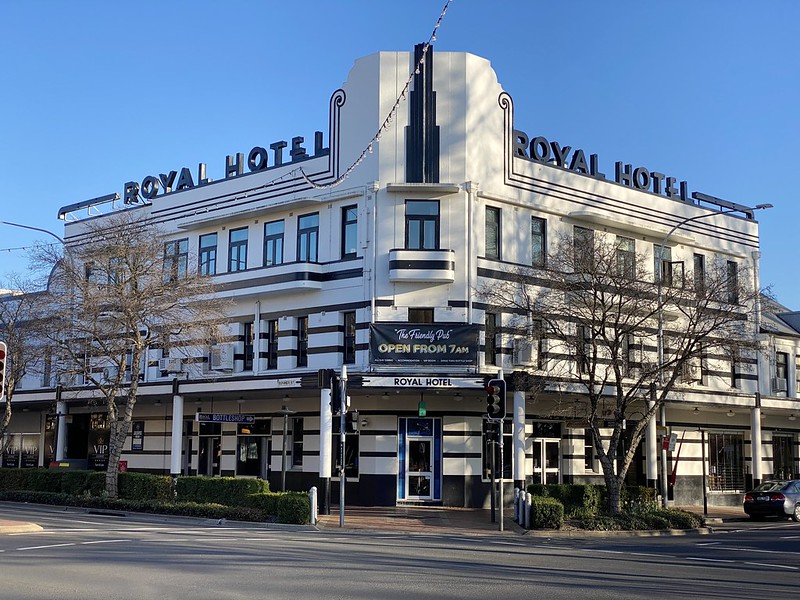 After eating, we went for a drive to check out some of the local wetlands for bird life. I took my SLR and long lens and we stopped first at the Brooklands Wetlands. This was a bit disappointing, being a creek running behind a row of houses, and accessible only by a strip of muddy grass. I didn’t see many birds at all, and got my shoes wet enough to soak the socks. After a bit we gave up and returned to the car to try driving over to the Coogal Park Wetlands. This was much better! There was a paved path running along a stream lined with bullrushes and other wetland vegetation. We followed it north for about a kilometre, and spotted a dozen or more different bird species. I managed to get some hopefully decent photos of a crimson rosella parent and a juvenile still in the nest, and a grey fantail.

We stopped to fill the car with petrol on the way back to the hotel. Then we went for a walk through the centre of Orange, checking out the main street and one of the small parks, where we let Scully play in the grass a bit. We wanted to get her walking a lot today to wear her out for tonight so she sleeps!

Now it was approaching noon and we walked over to Parrot Distillery where we’d booked a lunch. We found the distillery and they welcomed Scully inside, where there were several tables in the shed where they did the distillation, with a bar and a pizza oven on the side. I got a tasting board of three of their exotic gins: sloe gin, oriental gin, and bush botanicals. They were all very different and good. To go with the drinks we ordered a rosemary bread, which turned out to be a pizza crust with rosemary springs and large flakes of salt, which was good. Then we ordered a margherita pizza and a pizza with local pork and fennel sausage and potato on it. They were both really good. We took a few leftover slices back to the hotel.

After lunch, we decided to take Scully out to the Orange Botanic Gardens. I didn’t feel like driving after all the gin, so we walked. It was a fair way, over 4 km each way. The gardens were very nice, but a little bare coming out of winter into early spring. 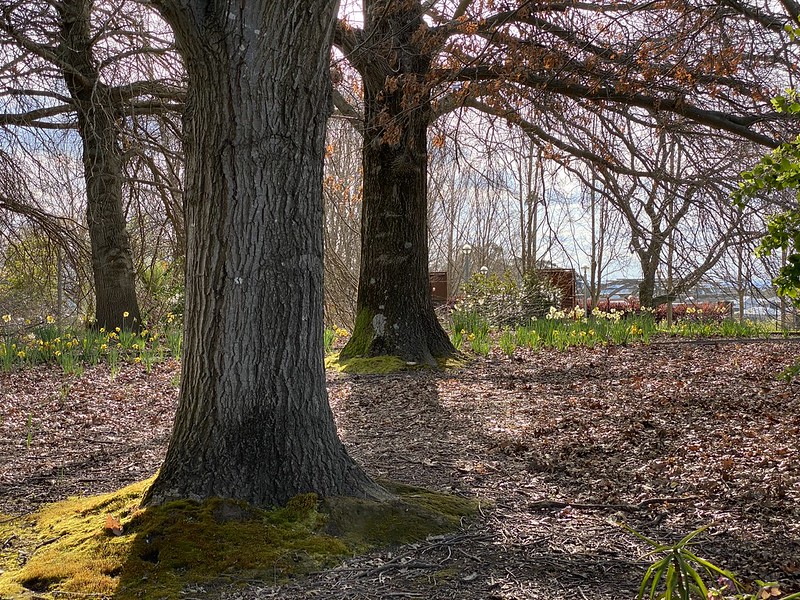 There were some magnolias in flower, and wattle trees, but not much else. 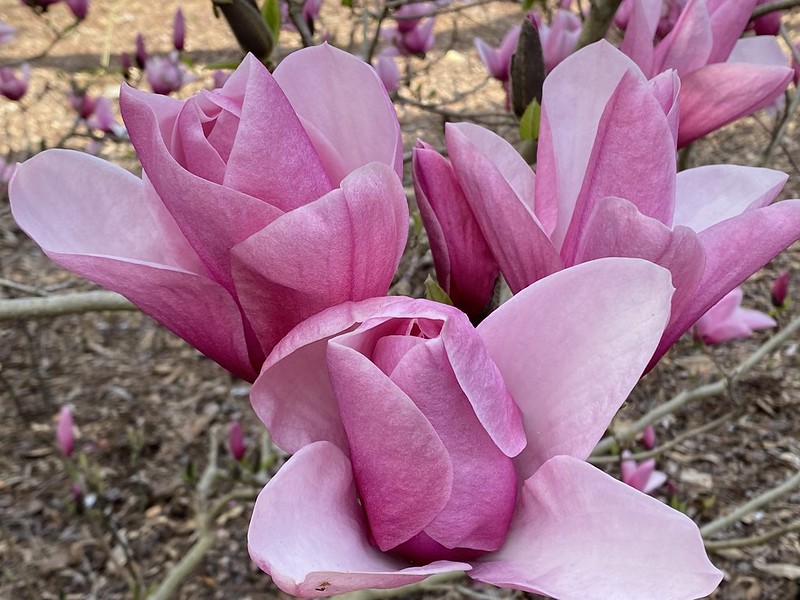 We walked back, with Scully walking all the way home. She should be really tired tonight!

We stopped in at the hotel briefly before heading out again for dinner, at the Union Bank restaurant. We sat in the very nice courtyard, which was not as cold as sitting outside at the Peacock Lounge last night. We shared a cos salad, a cheese platter, and the lamb dish, sliced and served with baba ganoush and some pickled vegetables and chilis. It was good, but not as good as last night’s dinner. Then we walked back home to the hotel for the night.

Tomorrow will be interesting. The forecast is for up to 40 mm of rain in the region, and catching the evening news tonight we saw that authorities are concerned about potential flooding.