We all slept a lot better last night. Scully was much more settled, which meant my wife and I could get a good sleep too. We were so tired after not sleeping the previous night that we slept in until after 8:30. When we got up, it was raining steadily outside, as forecast. I took Scully down to the grass for her toilet, which was wet but not as cold as I expected.

We had breakfast (mine was the leftover pizza from Parrot Distillery), then had showers and got ready to head out in the wet. M. wanted to go to Ever Coffee Roasters cafe, which we’d spotted yesterday on the other side of the railway station. It’s a short walk from our hotel, just over the railway line. They had some tables outside under a wide awning, so we could sit while my wife had her coffee, though it was pretty chilly. While we sat there, we could see through a window into the home decoration shop next door, where a toddler was crawling around and sitting in a display box of little coloured samples of carpet. 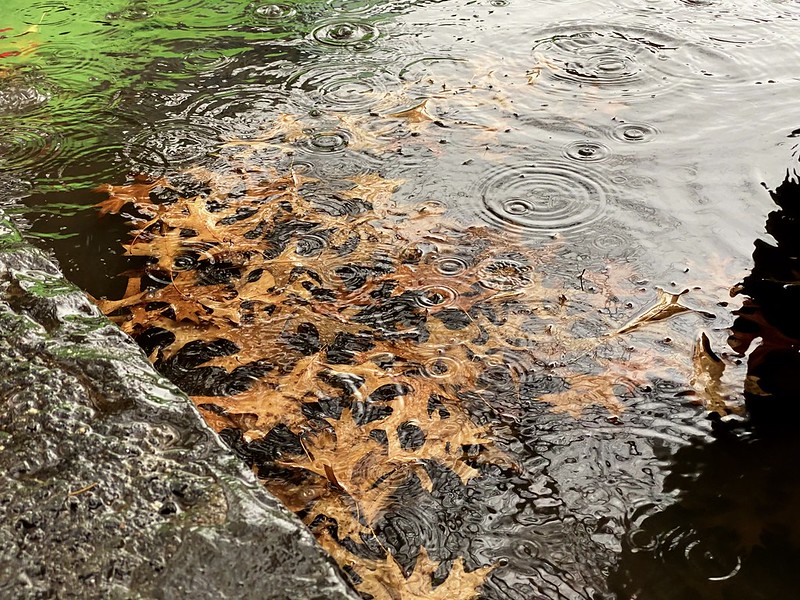 We walked back through the rain to the hotel. Then we hopped in the car to drive out to Spotlight, so my wife could look through some of the fabrics there to choose some for making dog bandanas. This was a backup time filler while it was raining heavily. The car navigation system tried to take us along a road that had been permanently blocked off, and then when we went around we ended up on a brand new road that didn’t exist in the navigation database. Fortunately I had a good idea where we needed to go, so we ended up there without too much trouble. Scully got to explore the store while my wife found a bunch of fabrics she wanted to buy.

From there we drove over to the Nile Street Cafe, where we’d booked lunch. Earlier my wife checked by phoning up that they had somewhere we could sit outside but out of the rain, which they confirmed. The cafe was a converted house in the middle of a residential street. It looked nice and had a fairly fancy menu. I had the battered barramundi with chips and salad, and then a slice of a Persian tart, which had lots of almonds and pistachios in it, topped with dried rose petals, and infused with rosewater, which was really nice. As we ate these, the rain eased off and stopped, and the sun came out, filtering through the clouds. We decided it would be a good chance to walk Scully around the block to get some exercise before leaving. But as we packed up to go, the rain started up again, and it was heavy by the time we went back to the car and climbed in. 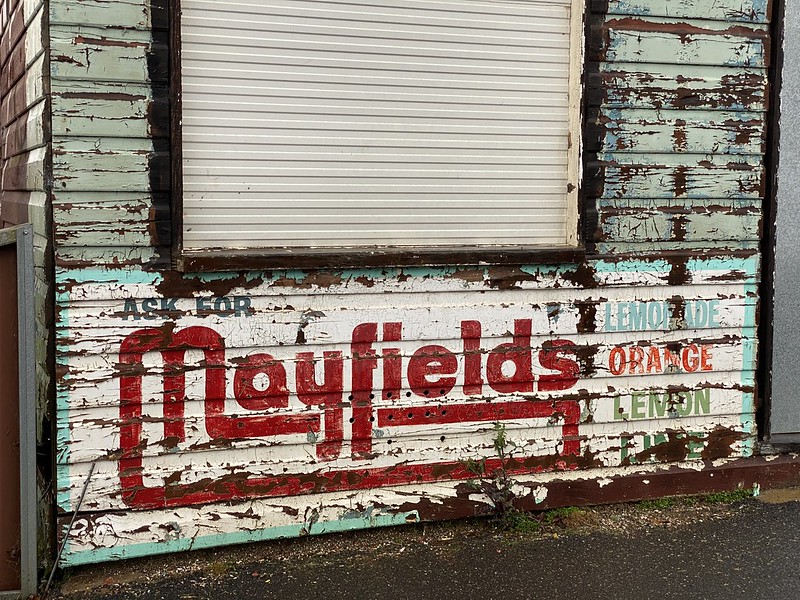 While at the cafe, I found and contacted Brangayne Winery, which was the first one to come up for dog-friendly wineries in the region. I left a message and a woman phoned back to confirm that yes, we could bring our dog and do a wine tasting, indoors out of the rain. So we drove over there through the rain and entered the vineyard, which had a nice view over a broad valley looking back towards Orange. The tasting was in an old apple storage shed, which the woman there told us was used to store fruit from when the property was originally an orchard, growing apples and stone fruits. It converted to a vineyard in the 1990s. 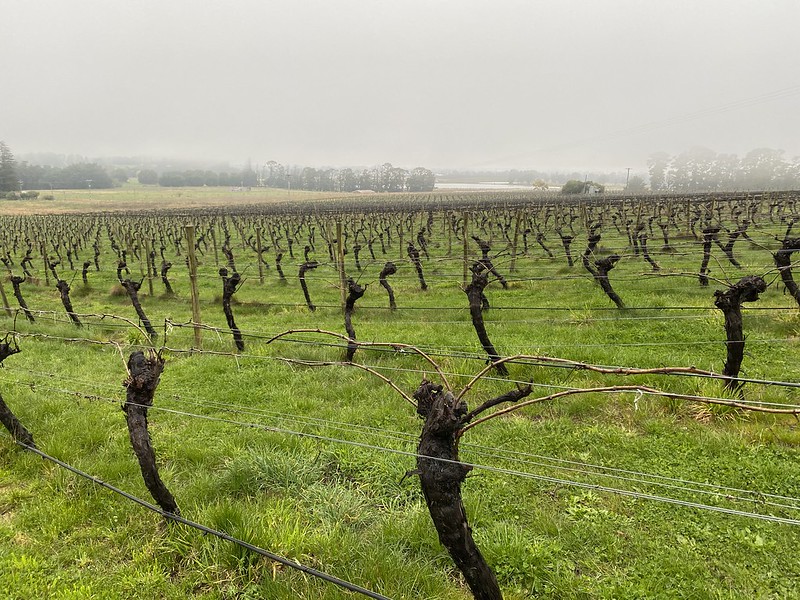 We did a full tasting of the wines: Pinot Grigio, Sauvignon Blanc, Riesling, Chardonnay, Pinot Noir, Merlot, Shiraz, and the winery’s signature “Tristan” blend of Merlot, Cabernet Sauvignon, and Shiraz. The Chardonnay was named “Isolde”, as the winery itself was named after Brangayne, a handmaiden of Isolde as told in the Arthurian legend. We bought a half dozen bottles to take home, mostly the Merlot and the red blend, which were the best in our opinion.

The rain had started again heavily while we were inside, so we decided to wait a bit before braving it to get back in the car. After a while, I realised that there was a loading ramp under cover, and I could go get the car and back it onto the ramp and then we could load the car without having to deal with the heavy rain. So we did that and then headed off back to Orange. 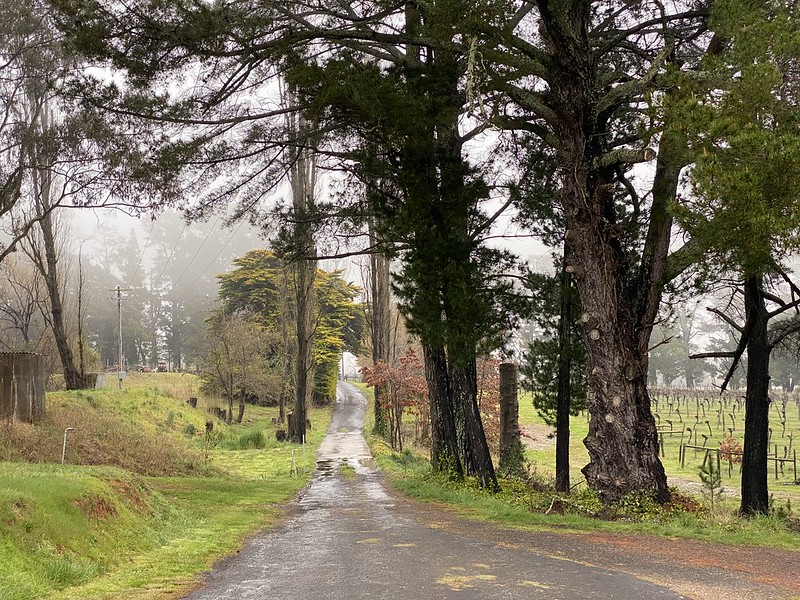 At the hotel, the rain had stopped again, and we set out for a bit of a walk to give Scully some more exercise. But it started raining yet again, and we decided to keep it short, just going around the block. For dinner we decided to order take-away from an Indian restaurant. I chose The Upper House, which was highly rated online. We had dhal tadka and malai kofta with rice and a piece of roti. I considered some of the meat dishes, but after having duck two nights ago and lamb last night I didn’t feel like any sort of meat tonight, so went for the extra vegetarian option. I went out in the rain again to pick it up, leaving M. and Scully in the room to stay dry. The food was very good, with the dhal being a bit spicy even though I’d asked for mild when they asked how spicy we wanted it.

It’s still raining steadily. Checking the Bureau of Meteorology, I see we’ve had close to 40 mm of rain in the Orange region today. The forecast is for it to continue until about 7am but then start clearing up. So hopefully tomorrow we’ll have some better weather.