This morning I noticed a punnet of strawberries in the fridge that I’d bought last week, and realised we better do something with them, if they haven’t gone mouldy already. One of them had, but the rest were okay. My wife suggested drying them, if we could, to use as breakfast cereal topping.

I checked some online recipes and indeed, found that I could dry them in a slow oven. So I sliced them up and stuck them in at 90°C. 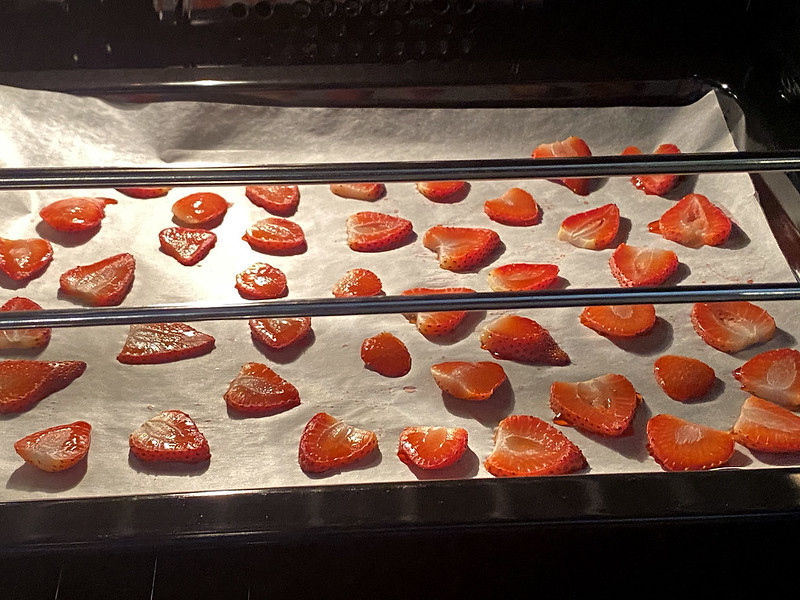 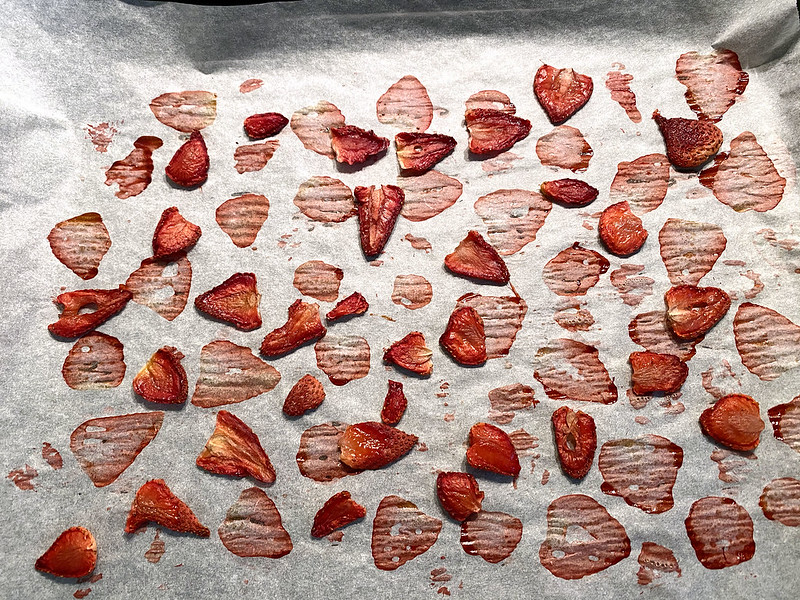 They turned out nice and crispy, and left an interesting pattern on the baking paper. I reckon this is how you made lickable wallpaper.

I also made some more Darths & Droids comics today. And in weather news, it was cold! The overnight temperature was about 10°C, and it had risen to 21°C by 9am, but then by midday it dropped back down below 14°C as a cold front came in, bringing heavy rain. The next few days are going to be chilly, and it looks like only getting up to 24°c next week, according to the forecast. Summer is over.

We have a good method of making cheap chew toys for Scully. I buy a bunch of 100% cotton rope from the hardware store, cut it into lengths, and tie knots to stop it fraying. Scully loves playing tug-o-war with these ropes, and chewing them. 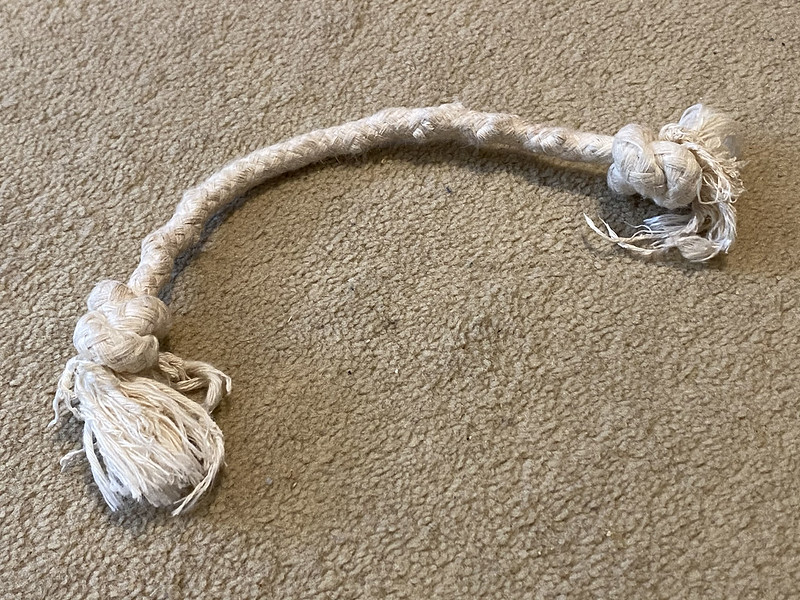 A couple of days ago when I went past the hardware store I bought a new batch of rope. When I got it home I took the wrapper off… and oops! 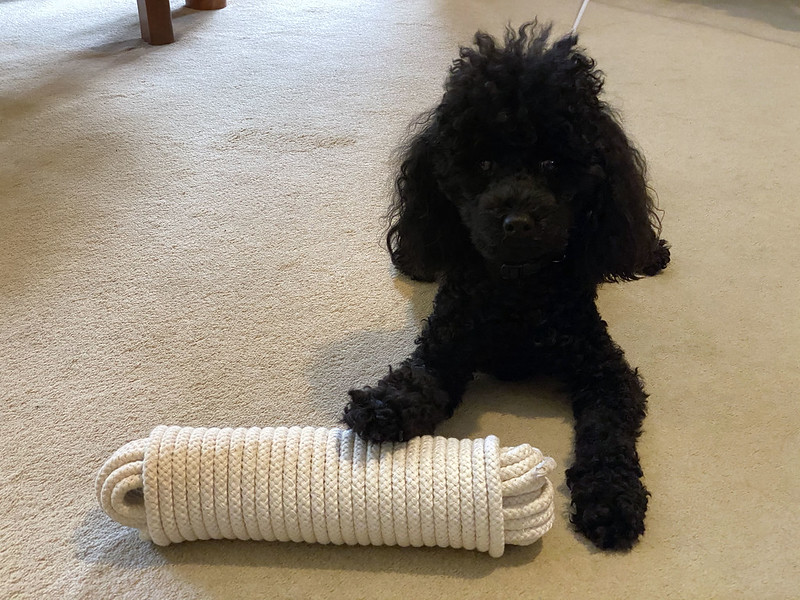 We couldn’t get it off her for a while! And just for fun here’s another photo fo Scully, from yesterday. 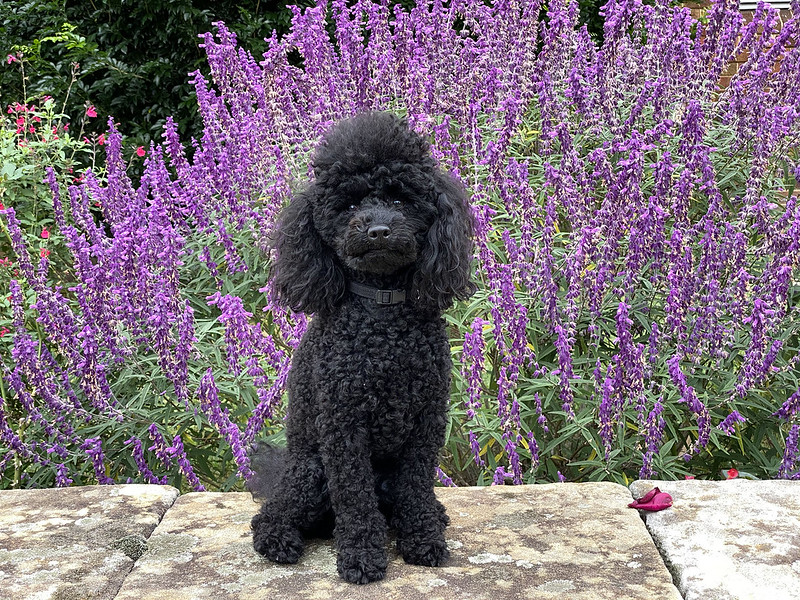 This morning I went to play golf with my friend, at the “pitch and putt” course where I first learnt to play. We did a rematch of the golf “skins” game we did a couple of weeks ago. Since I won that one with a handicap of 18, he suggested reducing my handicap to 16 for today. This meant that for the hardest 16 holes I only had to equal his score to win the hole, but for the two easiest hole I actually had to beat his score to win the hole. I thought he was still being generous after last time, but today I played poorly, and he won easily, 12 points to 6.

Here’s my best tee shot of the day. 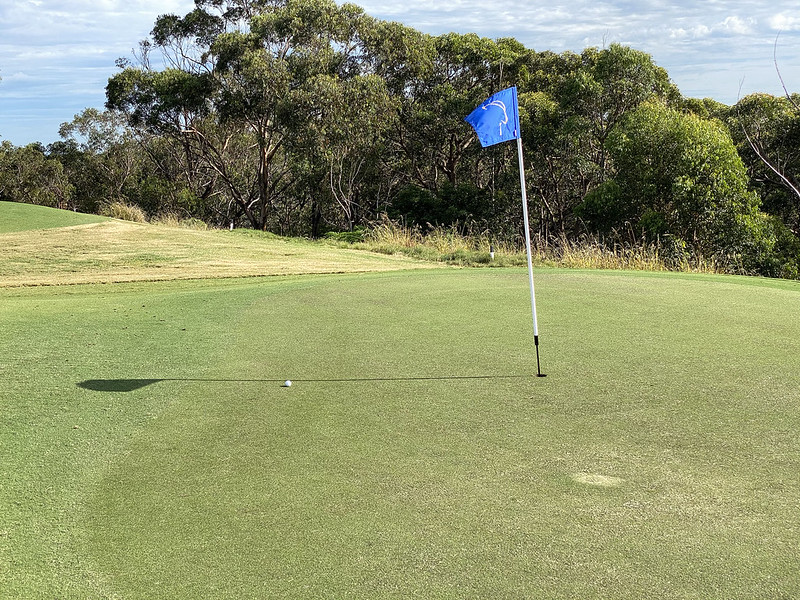 Unfortunately I took two putts to sink it from there. Contrast my friend’s best tee shot of the day: 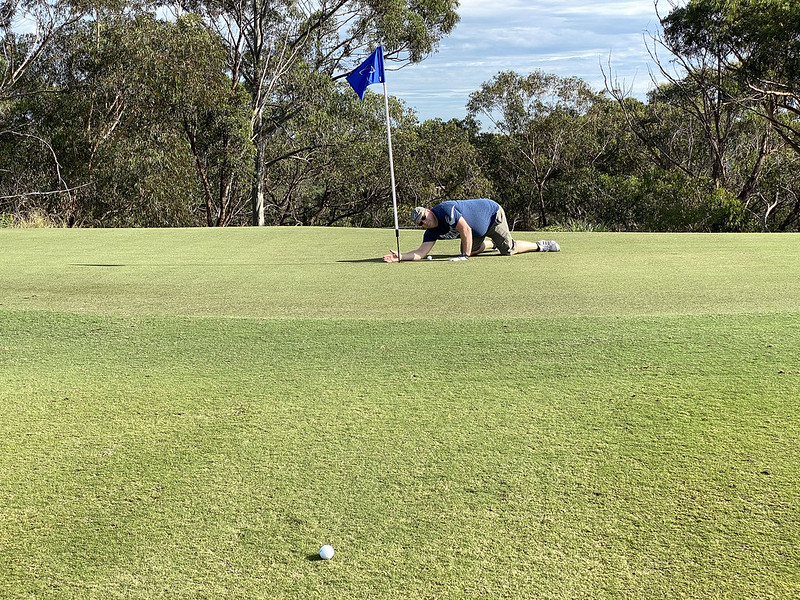 That’s my ball at the bottom. His ball is less than a forearm’s length from the hole. But that wasn’t the best shot we saw today. Another guy playing a hole near us scored a hole in one! I saw part of this shot, and the ball rolling on the green, but didn’t see it fall in the hole. However there was no mistaking it when people nearby exclaimed loudly and the man himself celebrated, and took a photo of the ball in the hole. So that was pretty cool.

I was just trying to remember what I did today, and nothing came to mind… It was one of those days. Goofed around a lot. Well, I cleaned the bathroom window flyscreen and sill. Exciting.

I baked a loaf of banana bread, to use up some old spotty bananas. My wife suggested adding some yoghurt, so I Googled up a recipe that included yoghurt in it. It turned out nice – better than the last time I made banana bread.

I’ve been playing the game Wavelength with some friends via Discord. One guy coded it up as a Discord bot, and it works really well. He’s also coded Codenames into the same bot, so we have a couple of things to play when a few of us are hanging out in chat. It’s a good way to keep social during this virus distancing stuff.

I needed to buy a couple of things from the hardware store today, so I took a walk over there, and then proceeded to walk home via a roundabout route, so I could document another Sydney walk with photos. The previous walk was very touristy and beautiful, so I thought I’d explore a grungier side of the city today. It’s not the grungiest, because I’m limited to suburbs within walking distance, but hopefully there’s a bit there!

Photos and commentary are in this Imgur album.

I also worked some more on Darths & Droids today – made another comic, wrote some annotations.

It’s Sunday. My wife says she’s been losing track of the days because she’s been working from home, but I somehow manage to keep the days straight – except today I felt a bit lost and had to think about it.

We didn’t do much, except take Scully on a long walk this morning. Oh that’s right… there was a bit os housecleaning and stuff – cleaning the bathroom, refilling the wardrobe damp absorbers, washing up, etc, etc.

Oh, and I made chilli sauce out of the chillies I picked and chopped three weeks ago! I’d left them to ferment in brine with garlic, but I think I put too much salt in and the lactobacillus never got going, since there were no bubbles like my friend told me to expect. But anyway, I added some vinegar and blended the result, and it turned out looking like a slightly chunky Tabasco sauce, so I guess that’s good. I’ll try it later in the week. 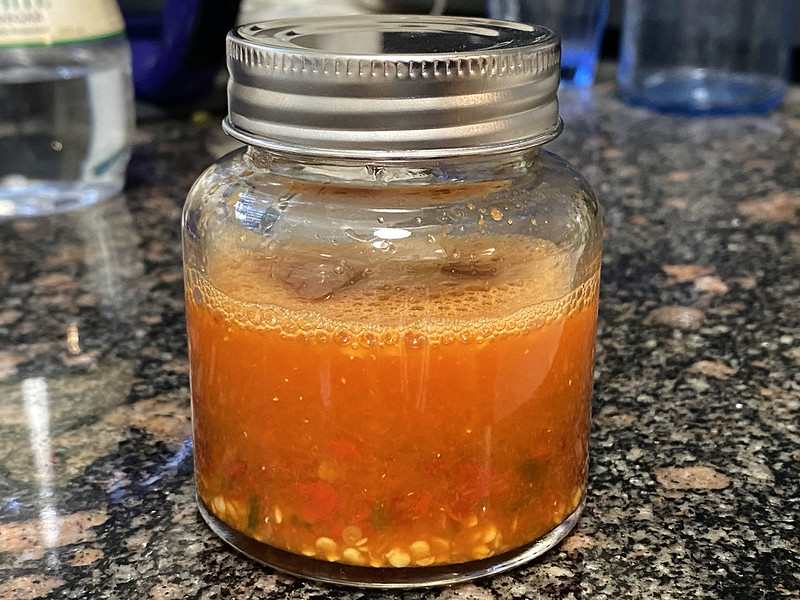 Today was Anzac Day, Australia’s (and New Zealand’s) most solemn day of remembrance. Normally it’s marked by massed gatherings of people at ceremonies held in pre-dawn light in all cities and towns. But it couldn’t happen this year, because of COVID-19 restrictions. Instead there was a movement for people to play The Last Post on any instrument they had, in their driveways, on balconies, out windows, wherever they were at home.

It was also kind of weird and surreal because normally Anzac Day has a big and obvious build up, but this year news was dominated by COVID stuff instead, so Anzac Day kind of crept up until suddenly yesterday we found ourselves thinking, “Wait a second, tomorrow is Anzac Day! Where did that come from??” All in all, it was a very strange version of the day.

Today I went through all the photos I took yesterday and write them up as a virtual walk through Sydney. I put it into an Imgur album here.

And there was housework and the usual sort of Saturday stuff. Nothing especially interesting.

I went for a long walk this morning. A very long walk… into the city across the Harbour Bridge.

I went all the way to the Opera House. The city was eerily quiet and empty, because of the COVID restrictions. Normally there are tons of tourists around that area, but there were only a few there today.

And then I walked back home. According to Strava I walked 18.6 km today (11.5 miles). That took me all morning. This afternoon I mostly processed the photos I took along the way.

This evening is another of our fortnightly games nights, being played virtually. I won a game of Quacks of Quedlinburg, and then a game of Dice Forge, and we’re now playing Codenames (giving me time to type this up in between guessing clues).

This morning I went to play a round of golf at the local course. I enjoyed the time outside and getting some exercise, but my round was poor, scoring my equal worst total for the 9 holes. So let’s forget that and move on.

Speaking of high scores, I spent some time calculating my score in the Goldfish Draft Magic: the Gathering tournament that I mentioned yesterday. I needed a spreadsheet to keep track, and ended up with a score of 7.8×10144, as best I can estimate. That’s nowhere near the winning score, alas, as at least three of the other players have been mentioning that their scores require Knuth’s up-arrow notation to write down succinctly.

Tonight for dinner I cooked a thing taken from a TV recipe that my wife saw the other day. It’s a roast miso-seasoned cauliflower, with a bunch of toppings an garnishes. The recipe is here (although it doesn’t list the ingredients for the cashew cream, which is 2/3 cup cashews, 1 tbsp maple syrup, and 1 tsp apple cider vinegar). 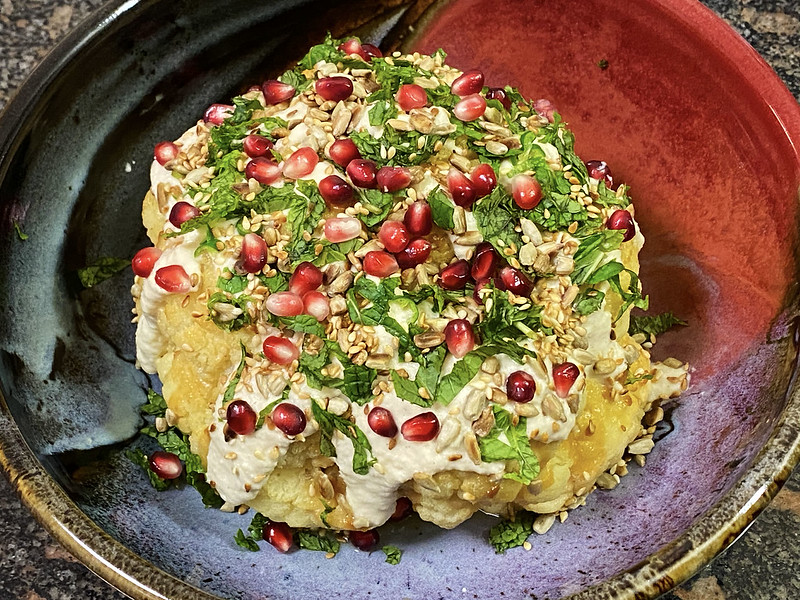 It wasn’t hard to make, and it was delicious! I’ll definitely be cooking this again.

I’ve been busy today participating in a Goldfish Draft Magic: the Gathering tournament with my friends. This is a tournament format invented by one of my friends, in which we draft cards (a bit like a normal Magic draft), then build a deck and calculate our score based on how much damage we can do to an unresponsive opponent in 7 turns. That is each player’s score – we don’t actually play any games of Magic against one another.

We’ve done this style of tournament several times in the past and it’s always a blast. But it’s truly mind-bending. My score in the last game was 3.75×1040, and I’m pretty sure that was a losing score.

Yes… in fact after checking with my friends, we have records that the winning score in that tournament was approximately 10↑↑↑7, where the arrows are Knuth’s up-arrow notation. Calculating one’s score usually involves a spreadsheet. Yes, we do this for fun. Yes, we’re nerds.

I also wrote some new comic scripts for Darths & Droids. And did various cooking and housework stuff.

My wife had some technical issues with her work-from-home this morning. Her work laptop simply wouldn’t boot up, and hung even when restarted in all of the various safe modes. So she ended up spending most of the morning on remoter tech support over the phone, trying various things to get to a point where should even begin working. This is very frustrating, both for her and also for me since I’m in the same house hearing it all going on.

Around 10am I went for a long walk to clear my head (alas my wife didn’t have that option). I took Scully with me. She’s feeling much better now after her illness last week. 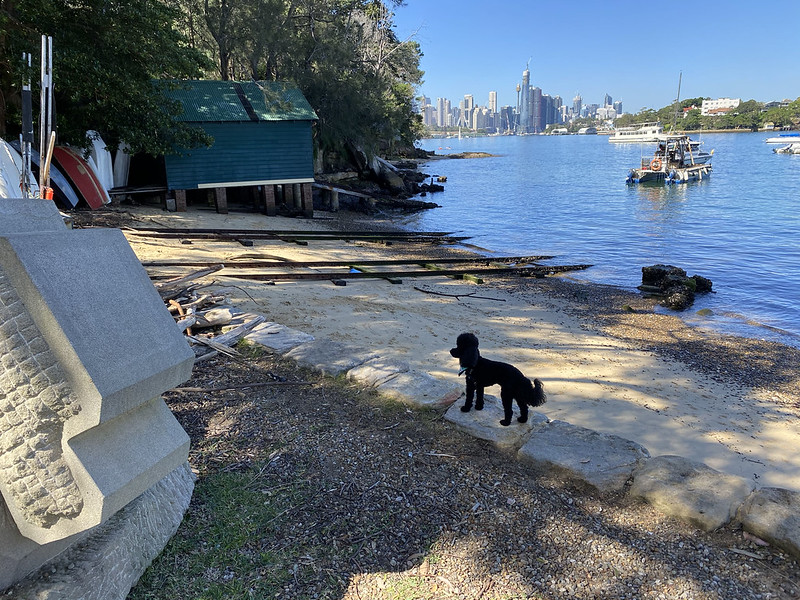 Here she is hanging out near Greenwich Baths, which is a good solid 3 and a bit km walk (about 2 miles) from home. That’s a really long walk for her and she was dog tired when we got home. 😄

This afternoon I made crème brûlée to use up some leftover cream I had in the fridge. 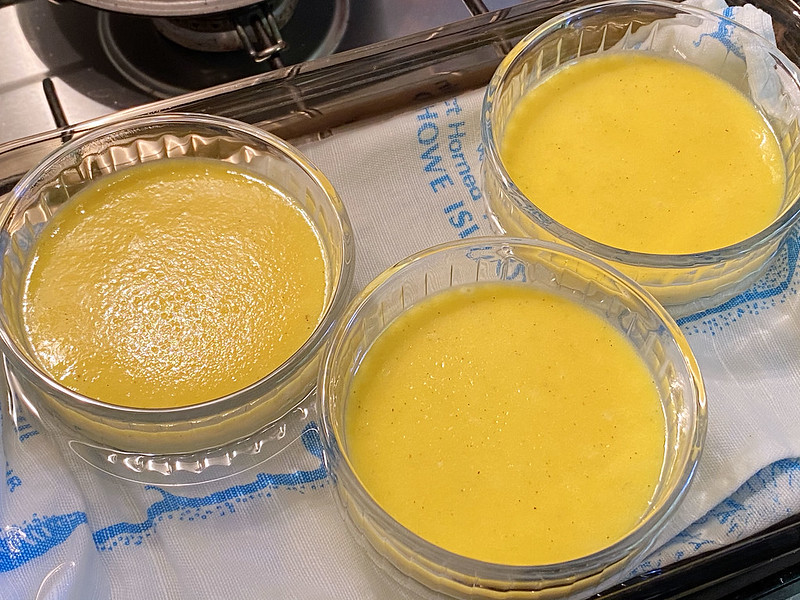 It’s actually not difficult to make. The custard turned out pretty well. The recipe says to refrigerate overnight before adding the sugar and flaming it to melt it, but I was impatient and decided to blowtorch some brown sugar on top tonight. 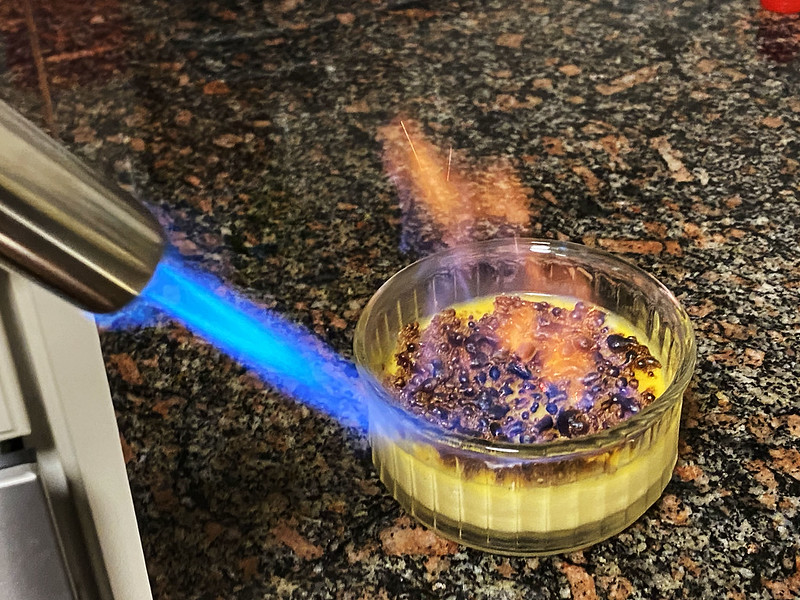 Unfortunately the sugar was a bit lumpy… and caught on fire. After extinguishing the sugar and letting it solidify, it actually turned out fine. The whole thing was delicious, although the sugar didn’t make a nice even crust on top. I think tomorrow I’ll try white sugar, and make sure the layer is even before torching it.