This morning I taught my second class on Outschool. It was another session of the class on Human Vision. Again I had only one student, but I don’t mind that as it’s good to get comfortable with small numbers of students before having to handle multiple all at the same time. This time it was a boy, and he seemed to to enjoy the class.

I spent much of the rest of the day assembling the batch of Irregular Webcomic! strips that I photographed yesterday. I’ve also been helping my friend with his Bisecting History Twitter project, by finding interesting events for different dates. We’re putting in quite a bit of research for this thing. And I’m incidentally learning the relative timing sequence of various events that you don’t normally think of as related to one another, such as certain books being published in the same year as certain wars or scientific discoveries, and so on.

Not much more to report. I’m pretty much racing to get everything done that I need to before heading out on a road trip holiday with my wife next week.

I spent most of Sunday working on Irregular Webcomic! strips. In the morning I finished writing the new batch, and then after lunch I spent the afternoon photographing them all.

In between I went for a long walk with my wife and Scully. Normally we do a big walk on Sunday mornings, but she went for a morning tea with her mother and brother today, so we did the walk after lunch.

I picked some different music to listen to while working today. Normally I go for something in the rock genre, or perhaps movie soundtracks if I want something without lyrics to be less distracting. But today I went for Beethoven – the 6th and 9th symphonies. It’s been a while since I’ve listened to these, but I just felt like it today.

My wife is on three weeks leave from work, beginning today. She kicked it off by doing a bunch of sewing for the dog bandanas she’s started making. I asked the market organisers for one of the markets I do if I can take some of her bandanas to sell along with my photography, and they said that would be fine. So next time I’m there we’ll see if we can sell some of them.

I worked on Irregular Webcomic! strips today – starting to write a new batch of comics. I want to get this batch completed before we go on a short road trip in just over a week. We’re planning to drive up the coast and spend a few days away with Scully. We found a nice hotel that allows dogs in some of the rooms, so that should be cool.

I went out with Scully to the fish & chip shop for lunch today. We went out to my favourite local lookout spot to eat and watch the view.

And that’s about the whole day.

I went running today for the first time since Monday last week (10 days ago). I intended to do a run earlier than this, but circumstances conspired to keep me busy during the cool mornings. It was a warm sunny morning today, and I felt out of practice and like I was going very slowly. I was prepared for a bed time…

But I was surprised when I finished the 5 kilometres and found my time to be 27:58, which is my best time on this particular route. So that was pretty good!

More comic writing work today. I need to get ahead in the buffering because my wife and I have a short road trip holiday planned in a couple of weeks.

Today was the second Ethics class of the year, and the first proper topic after last week’s introductory lesson. The topic is voting, and we started with a discussion of two students who wanted to be elected to the Student Representative Council at their school. One wants to tackle several thought-out issues, while the other just wants some cricket nets installed in the playground so he and his friends can play cricket – probably to the detriment of everyone else who will have less playground space. The first fears the second is more popular and so might win the election.

The discussion tackled the questions of whether it’s okay to vote for someone just because you like them, rather than thinking about their policies, and whether everybody should be allowed to vote, even if they don’t care about the issues. We had a lively discussion, with the kids bringing up various points, such as criminals being allowed to vote. It was really good, and again after last week I was pleased to see that this group is so much better behaved than a few of the kids I had last year.

At the end of the class, as they were leaving, I overhead one of the girls say to another, “That was the best Ethics class ever! Usually they’re really boring.” So that was pretty satisfying! I’m really looking forward to this year of classes with this group.

For dinner tonight I made a special fun dish: miso baked cauliflower. 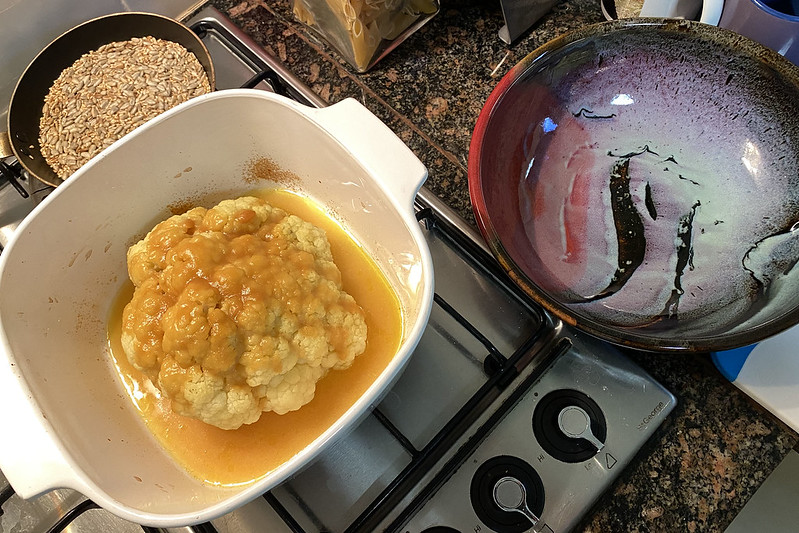 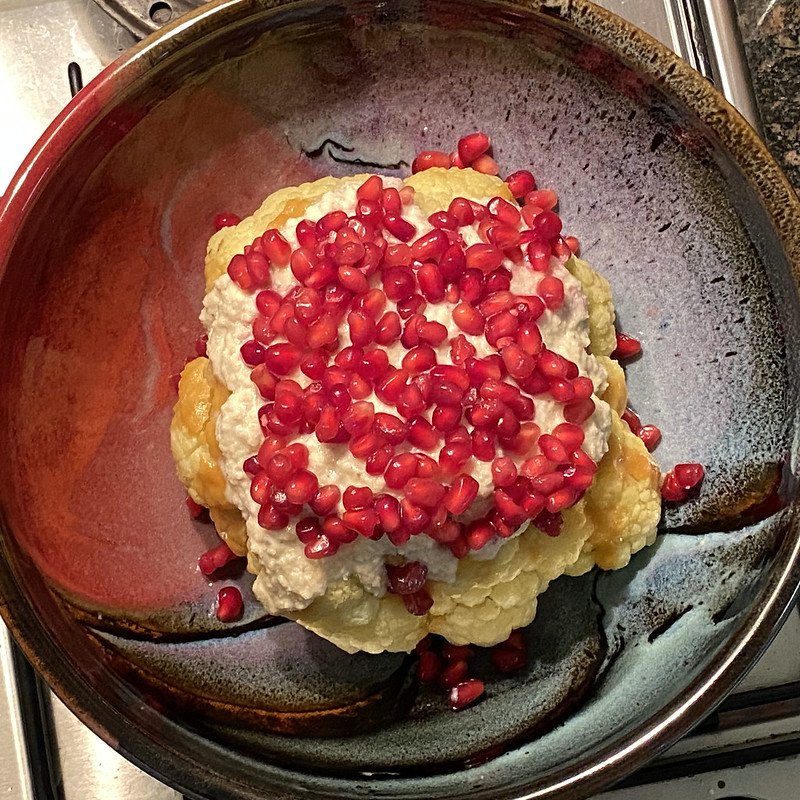 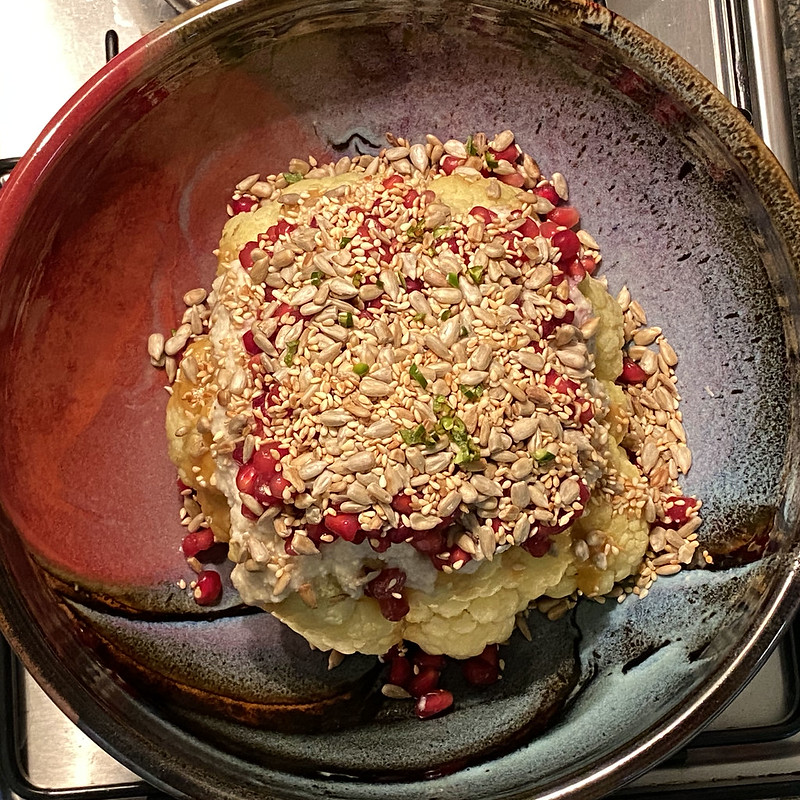 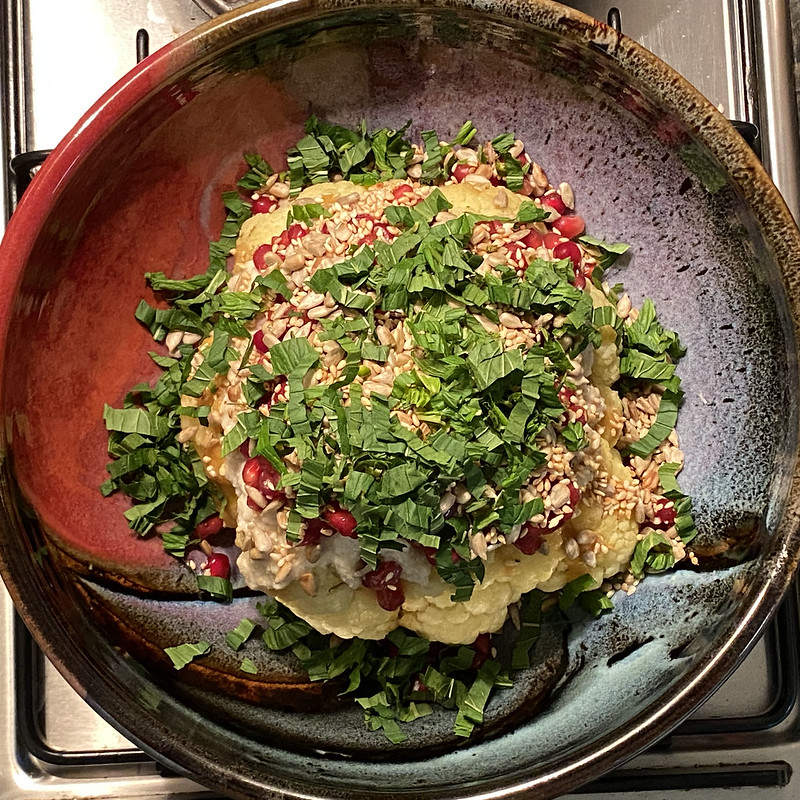 The cauliflower cost I think $1.69. The garnish ingredients were over $10. But delicious!

Today I dedicated to making new Darths & Droids comic. The buffer of completed strips got pretty empty over the past week as I spent a lot of time working on my Outschool class material for yesterday’s class. But now that’s done, I can get back into the comic production pipeline.

In other news, a friend and one of the the co-authors of Darths & Droids has launched a new Twitter account, called Bisecting History. The concept is to find pairs of historical events such that one is exactly twice as old as the other, to the day. For example, the launch fact, posted yesterday on 1 March:

Today, The Office (US) is as old as the Dilbert comic strip was on the day that The Office first aired. Down to the day, each span exactly 5821 days.

Here at BisectingHistory, we find all the crazy coincidences that arise from folding history back upon itself.

Today, one of the most influential video games of all time, Doom, is as old as colour TV was when Doom was first released. A span of 9944 days ago, and 9944 days before that – each just over 27 years. Who else feels old armed with this knowledge?

He has some really interesting ones lined up for the next month, so take a look!

This morning I had my first class on Outschool! Two students had signed up for the class in Human Vision and Colour Perception, but when I woke up this morning there was a request from one of the parents to move their child to a class next week instead. I transferred the student, which left me with just one attending today’s class.

As it turned out that was actually good, because it was a good chance to practise using Zoom to show the slides I’d made and talk through them, without too many students to keep an eye on as I went. I paused a few times to make sure she was keeping up, and she sounded genuinely interested and engaged. I got through the material pretty much right on time, and the girl seemed very happy with what she’d learnt. So it was definitely a success! And for the class next week I already have the other student already signed up. Hopefully a couple more will join in over the next week.

The rest of the day I concentrated on writing Darths & Droids comics, since we’re a bit behind in our buffer at the moment – because I spent to much time last week working on my class material. 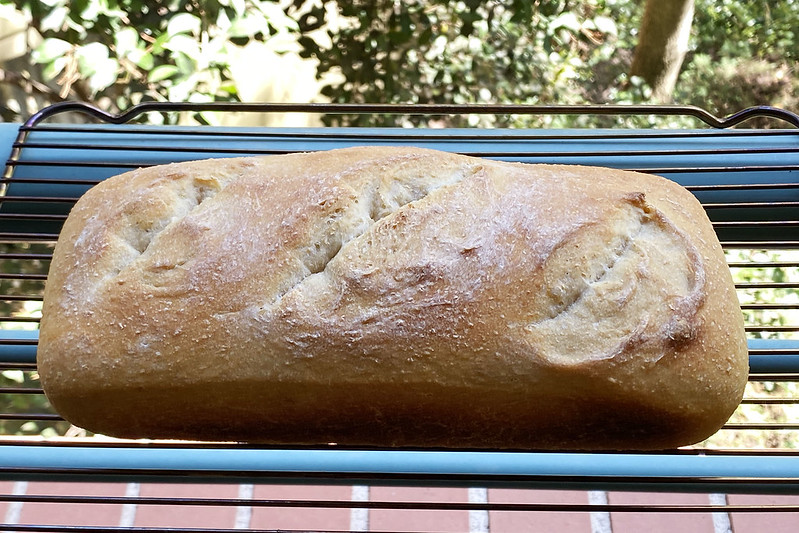 My wife and I also did a big walk with Scully, down to the Coal Loader Market, which runs 4 times a year. Normally this market is packed with dozens of stalls and a lot of people. They had cut it down to maybe only a quarter of the usual number of stalls, all spread out with a lot of space in between. And the crowd wasn’t nearly as big either.

It’s on a lovely location on the shore of the harbour, this market!

Today I worked more on my Human Vision course notes. I pretty much have them done now – I just have one more diagram to draw, which I’ll do tomorrow.

I helped my wife to work out some sewing patterns for making dog bandanas – the project I alluded to last weekend. She’s planning to make them to sell on Etsy, and I’ll carry a few to my market stalls so people can buy them there too.

Not much more to say today, except that I tried the Mars bar cheesecake at my local Greek place tonight for the first time, and it was really good. 😋