I spent much of today sorting through old Magic: the Gathering cards, to pull out sets of common cards to give to that boy I mentioned a few days ago. I’ve got several piles of cards earmarked. I emailed the mother and said it would be about a shoebox full of cards, but it’s looking like it will be a bit more than that.

I was going to take Scully for a long walk at lunchtime, to pick up some mince tarts from the Naremburn bakery, but I looked at the weather radar and noticed rain heading in. It might have hit us before we got home, so I elected to take her for a shorter walk down to Bayview Park instead. We made it back before the rain hit, which was good.

For dinner tonight, my wife suggested we grab fish & chips from the local shop. We walked up there and grabbed a table under the awning to eat as the rain began again. There’s somethig nice about fish & chips under a shelter in the rain.

A couple of nights ago I finished reading the last volume of Peter Ackroyd’s History of England. I checked my “to read” list and decide to start work on Harold McGee’s On Food and Cooking. I’ve had this on my shelf for several years, but have never begun it because it’s so huge and daunting. But I’ve started now, and I’m several pages into the first 60-page chapter, which is entirely about milk and dairy products. It’s fascinating so far – I think this will be a great read!

After reporting yesterday that I seemed to be coming down with a nasty cold, today I felt absolutely fine! I downed an antihistamine tablet with breakfast, and my nose has been clear and problem-free all day. So I suspect yesterday was merely a severe bout of hay fever, brought on by the spring weather and the strong winds we had yesterday, blowing around pollen and other offensive bits of plants. I did a COVID antigen test to be sure, and it came up negative.

After a morning ethics class, I took a drive with Scully out to my favourite pie shop on the beach. We sat on a bench by the sand and watched the sea as I had my lunch. 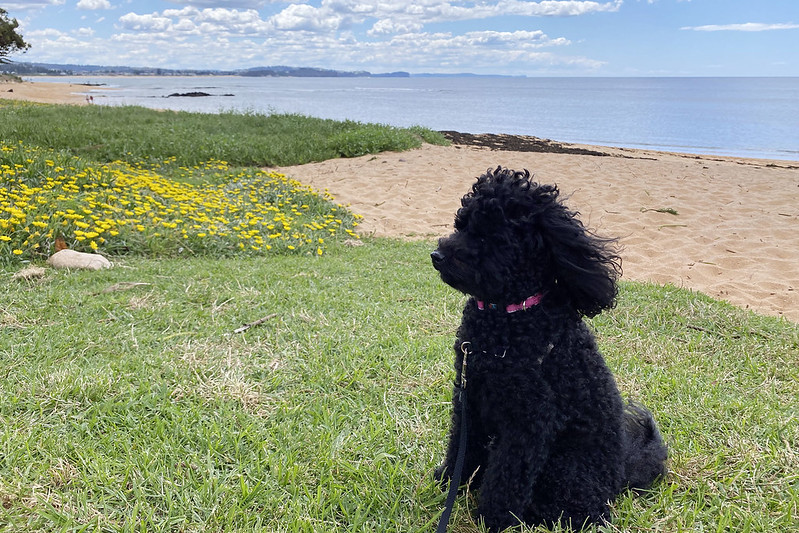 This afternoon I started to clean up some of my bookshelves. I want to get rid of some books to make space for newer acquisitions. I selected a handful of books and took them with me on Scully’s afternoon walk. There are a couple of community street libraries along one of our walking routes – the little boxes where people swap books. So I left a few in each of them. I didn’t take any out for myself – I do look in them as I walk past to see if there’s anything I want, but I’ve never actually found anything that I wanted to take. Anyway, hopefully someone will want the books I donated.

I spent much of today wrangling Matlab with various datasets, writing code and extracting statistics. I’m working on developing student exercises for the Data Engineering course at the University of Technology, Sydney, for the next semester (as I’ve mentioned a few times before). I ran into some issues with the datasets that I’m using, and need to figure out how to deal with them. Some of the numerical data is aggregated across multiple entries and needs to be divided according to an indexing variable… eh, it’s a bit complicated, and I still haven’t figured out what to do with it.

A couple of nights ago I finished reading Troy by Stephen Fry, his retelling of the Trojan War, and third in his series of Greek mythology. (I’m very much looking forward to the fourth book, which will cover The Odyssey.) He begins with the earliest causes of the war, and of course ends after it concludes and the Greeks begin heading home.

I’ve never read The Iliad, but I know it’s Homer’s epic covering the Trojan War. However I was very surprised that about halfway through the book, and most of the way through the war, Fry mentions in a footnote that “This is where Homer’s Iliad begins”. And then about 3/4 through, before the war is over, and even before the Trojan Horse is mentioned, there’s another footnote: “This is where Homer’s Iliad ends”. I checked and it turns out that The Iliad indeed doesn’t cover the whole war – it only covers a relatively tiny slice of a few weeks towards the end of the ten-year siege of Troy. So that was an interesting discovery.

The next book on my list is William Shakespeare’s The Merry Rise of Skywalker, the 9th in the series of Shakespeare-esque retellings of the Star Wars movies by Ian Doescher. It’s reminding me of a few things from the movie, that have prompted new ideas for Darths & Droids. So I’m reading it with a notebook by my side to write down things to include in the planning for our comics.

I took Scully for a walk around lunch time, and then another with my wife along as well before dinner.

Dinner tonight was “leftover veges fried rice”, to clean out the fridge before new groceries tomorrow. We have special plans for tomorrow’s dinner for New Year’s Eve. We often do a cheese platter and crackers thing, but this year we’re going to try some baked brie and crusty bread as a variation.

Oh! And the other big thing I did today was clean all the windows! (I was sitting here typing and wondering what I did all day, and forgot about it until now!) This is a fairly big job, since we’re two floors up, so to clean the outsides I need to remove the moveable window pane, then remove the insect screen, and then lean out the window with a long-handled squeegee. I wash the moveable pane in the bathroom, and also the insect screen, and then replace them all, and clean the inside of the fixed pane with window cleaner. Then repeat for all the other windows.

The other part of the job was replacing the rollers on the moveable pane for the bedroom window. For some reason the rollers keep seizing up and so after a while the window only opens by sliding, rather than rolling on wheels, which makes it much more difficult to open and close. The rollers come in little plastic cartridges, which slot into the window pane frame. But the fit is very tight. Last time I just hammered them in, but that made them difficult to remove today. So this time I decided to sand them down a bit to make them fit a bit more easily. Fortunately I had some fine sandpaper in the garage.

Anyway, with all this wrangling it took a few hours to clean and repair the windows. But now they’re so shiny clean that it looks like empty holes in the walls. Of course they’ll end up dirty again before too long…. but that’s life.

Tomorrow is the first day of summer, making today the last day of spring, despite it not really feeling like late spring. La Niña has made a mockery of spring, as we experienced wintery temperatures and unusually high rainfall for the past several weeks. Indeed, the Bureau of Meteorology reported today that New South Wales just had the wettest November since 1917. (Despite the cold, wet conditions in south-east Australia, the north-west is experiencing extreme heatwaves already.)

I mentioned how unusual it was that the sun came out briefly yesterday – well today it didn’t appear at all again. We had heavy, low overcast, with tall buildings disappearing into the low cloud, and it rained a bit around midday.

This morning I went on a trek into the city, to the University of Technology, to meet my friend who is the lecturer of the courses in Image Processing (that I tutored for this past semester) and Data Engineering (that I’m helping him redesign for next semester). The plan was to go over our course plan, discuss various issues, and decide on what needs to be done next to get it ready in time. I also picked up my university ID card, finally, which had been waiting for me in the security office since August.

After the meeting, I walked around to a book shop to pick up a copy of The Dire Days of Willowweep Manor, the first graphic novel by Shaenon Garrity. I had to get it, considering I know Shaenon and we try to meet up every time I travel to the San Francisco Bay Area. 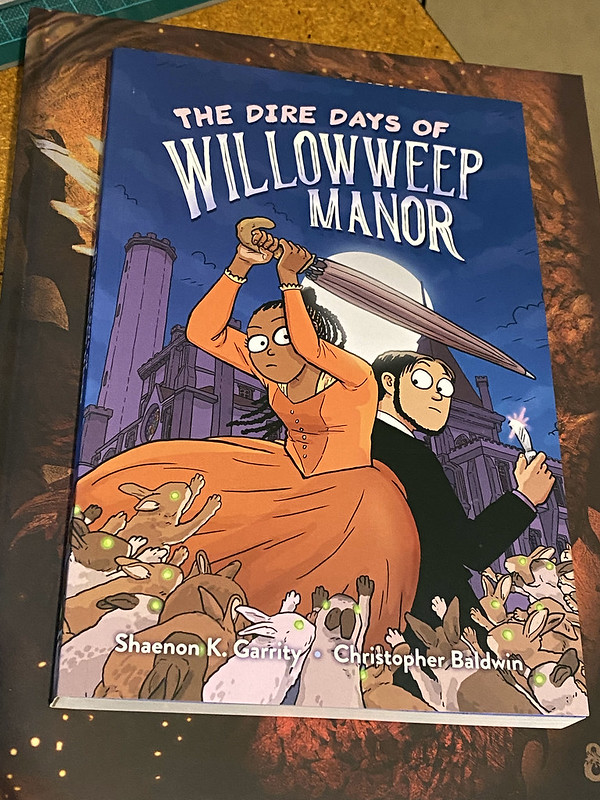 I also picked up a copy of Troy by Stephen Fry, since I found one in the smaller size that matches my copies of the previous two books in his Greek mythology series. I saw it in another book shop the other day, but they only had the larger paperback size for some reason, so I passed it up, and thought I’d have to wait months for the smaller size release. But it’s good to have it now!

And I went to the game shop and picked up a couple of Dungeons & Dragons books. Fizban’s Treasury of Dragons has just been released, and they also had a sale on Candlekeep Mysteries, which I’d declined to purchase some time ago because I don’t really need more books of adventures, but which I figured I’d grab for the bargain price when I saw that it was a compendium of one-shots which I might get use out of, rather than an epic campaign that I’m much less likely to use.

I spent the afternoon writing a lesson for tonight’s one-on-one class with my science student. She’s into art, so I decided to do a lesson on colour mixing, and why what people say about “primary colours” is so confusing and often wrong. She really seemed to like it, and get a lot out of it, so that was good!

This morning was another online ethics class, doing the “getting even” topic I mentioned on Friday. A new student signed up for the class about 15 minutes before it started, and was my first student from the USA. I’ve got students from at least 6 different countries now.

I had some things to do in the city today, so caught a train in. We no longer need to wear masks on public transport here, since there’s no COVID circulating, but it still feels a bit weird being in close quarters with so many people.

I spent a couple of hours in the city, and before coming home I visited one of my favourite bookshops. Browsing the gaming section, I found and decided to buy The Ultimate Micro-RPG Book, which looks like some good fun.

For dinner tonight I tried a variant on the cauliflower bomb which I’ve made a few times. I had half a tin of chick peas leftover from Sunday’s dinner, and decided to make hummus with them, and then realised baked cauliflower would go well with that. So I basically did the recipe replacing the honey cashew cream sauce with hummus, and it worked beautifully. Really delicious. I neglected to take any photos though, so I can’t share with you, alas.