When I woke up this morning the smoke had blown in over the city. It was really terrible, even worse than last Thursday. I drove my wife and Scully to work so they didn’t have to walk out in the smoke.

I planned to spend the day writing a new 100 Proofs that the Earth is a Globe, but I kept interrupting myself by trawling the news for updates on the weather and the smoke. It got worse as the morning wore on, getting so thick that I couldn’t see some of the buildings in the distance that I can normally see out the windows. At one point the Air Quality Index (a measure of gas and particulate pollution levels) reached a score of 2200 in my location, and as high as 2550 in other parts of Sydney. For reference, the scale is as follows:

So yes, we were over 12 times the amount needed to qualify as “hazardous” level. I stayed indoors with all the windows closed, but the smell of the smoke permeated the house. Around midday, my wife messaged me, saying that the fire alarm in her office building had been set off by the smoke, and they had to evacuate. I drove up to pick up Scully, because my wife didn’t want her sitting outdoors in that smoke for too long – she’s only a small dog. When I got there, the office buildings of the area were mostly obscured by the smoke in the air: 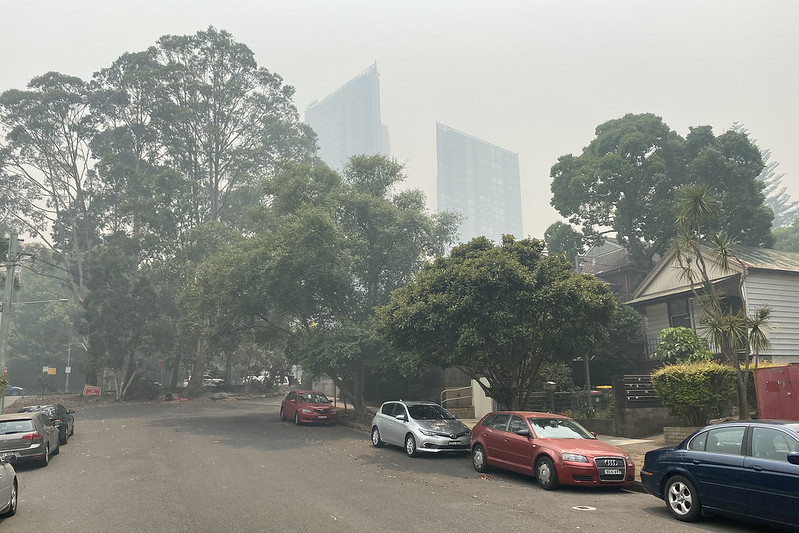 When I got back home, there was news that the smoke was setting off fire alarms all over the city – it said that over a hundred office buildings had been evacuated because of smoke alarms going off. And according to fire regulations, each building has to be inspected by the fire brigade before they can turn the alarm off and let people back inside. But there were so many going off at once that the fire brigade were stretched beyond capacity, and some buildings ended up abandoned with the alarms going off for hours before they could be attended.

If there was one good thing about the day, the smoke shielded the city from the worst of the sun, and the temperatures didn’t quite get up to the forecast maxima of over 40°C. This also kept the fires from spreading too far or too dangerously close to inhabited areas, and there were no reports of property loss today (that I saw).

This afternoon the wind changed and blew in fresh air from the south, and by this evening it was cool and possible to open the windows without making the house smell worse. And I even managed to finish writing my 100 Proofs article.