I missed yesterday’s post because I was out most of the day, so I’ll cover Friday and Saturday now to make up for it.

Friday morning I had a meeting at Standards Australia, chairing the committee on photography standards. I caught a train into the city, where Standards Australia has their offices in the Australian Stock Exchange building. So you have to check in and get a security pass, and the lifts have this weird operation where you swipe your visitor card and a lift comes and takes you to the floor you’re allowed access to, without you having to press any buttons – in fact the lifts have no buttons at all inside them.

We have committee members form various research and cultural institutions, as well as representatives form industry and professional photography associations. I reported on the work done at the international standards meeting in Cologne that I attended in October. One particularly interesting project is updating the formulation of visual noise measurement in photos, to revise the current international standard. Experimentally, the current definition doesn’t correlate very well with human observer opinion on how much noise is in an image. People from several countries have been doing experiments designed to derive and then verify a new formula based on image statistics – including an experiment that I ran in December 2018 (while I was still employed). The work is approaching the final stages and a revision of the standard should progress through the approval process in the next year.

After the meeting closed, I walked through the city to do some Christmas shopping. For someone I wanted to get some classic thriller movies, so I checked out a major retailer and their BluRay section. They had a bunch of Hitchcock films, and I thought I’d get Psycho and Vertigo. Both were available for $12.95, but Psycho had a discount sticker on it saying “2 for $20”, while Vertigo had a sticker “Buy 2, get 1 free”. I grabbed them and went to the counter and asked if they could treat the second sticker like the first and give me both titles for $20. The person said no, the stickered items were very strictly applied, and they couldn’t change the discounts. Feeling cheated of a bargain, I walked out empty handed.

A few blocks south, there was another shop of the same retailer, so I went in to see if their stick was any different. Again Psycho and Vertigo for $12.95, but here Vertigo had a “2 for $20” sticker, while Psycho had no discount sticker. If I’d managed somehow to get Psycho from the first shop and Vertigo from the second, I could have had them both for $20! But at this shop they again refused me the combo discount, so I stubbornly refused to buy either of them. If the stickers are “strictly applied”, how come the same titles are stickered differently at different shops??

Anyway, I progressed through a series of other shops, buying gifts along the way. The shopping areas were moderately crowded with Christmas shoppers, but not as bad as it’ll get in the next few weeks. Then I headed home on the train again. The sky was very grey and smoky still from the bushfires, but it seemed higher up, and not clogging the ground level with smoke like it had on Thursday.

After a brief stop at home, I set out for fortnightly Friday games night at a friend’s place. We started early, to give us an hour and a bit to write some Darths & Droids comics, at which we made good progress, writing four new strips. We’re still finishing off the Muppet storyline, and haven’t started work on The Force Awakens yet. We’re planning a group viewing of The Rise of Skywalker when it’s released in a couple of weeks, after which we’ll sit down and figure out our storyline through the final three films.

Then it was into games! We started with The Quacks of Quedlinburg, in which each player is a quack doctor, brewing magic potions in an attempt to sell them to patients, in order to buy more ingredients to make more profitable potions: 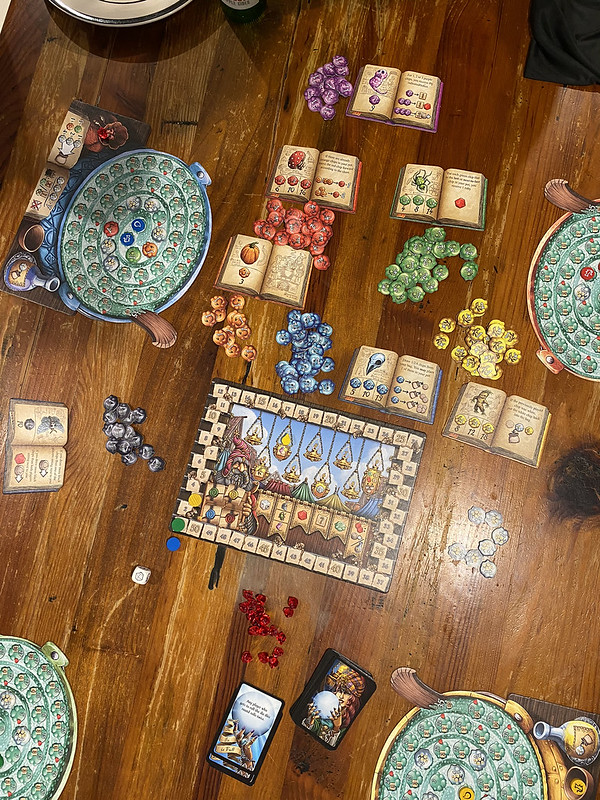 This game was interrupted a bit by several of us veering off to play Magic: the Gathering games to complete the high-powered cube draft we started back in September. The final few games were completed, and Steven ended up winning, while I managed to come dead last, despite being the only person who knew in advance what cards we were going to be playing with! While this was going on, other players played hot seat in the Quacks game, taking over as other people subbed out to play Magic. I started the game in one seat, but returned later to take over another seat, from where I managed to come second in the game – while the seat I started in came last!

After this, we split into two groups to play two different games. I ended up playing Wingspan, which I’d never played before. It’s a game of collecting different birds, using food to gather them, and then they lay eggs, and various other things happen that score points. 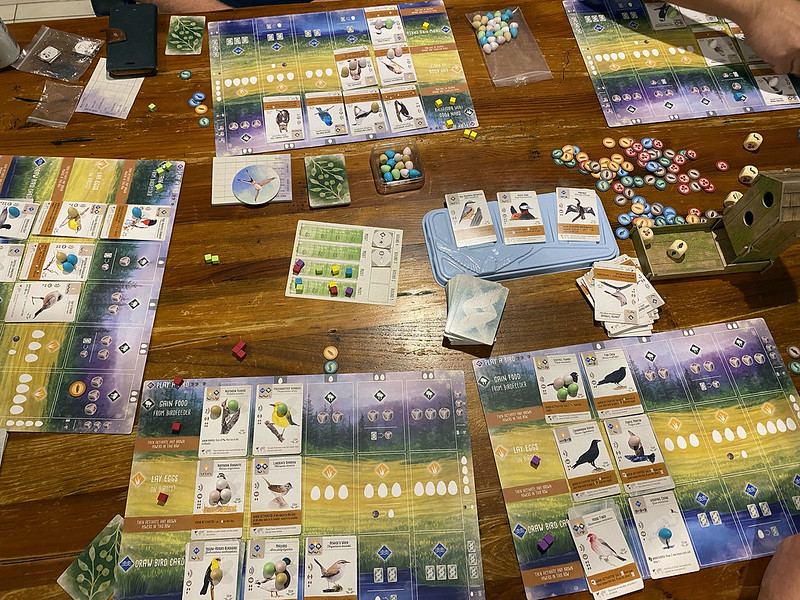 This was two rounds in; I was playing the board at the bottom with the red cubes, and I thought I was going rather poorly. But by the end of the game: 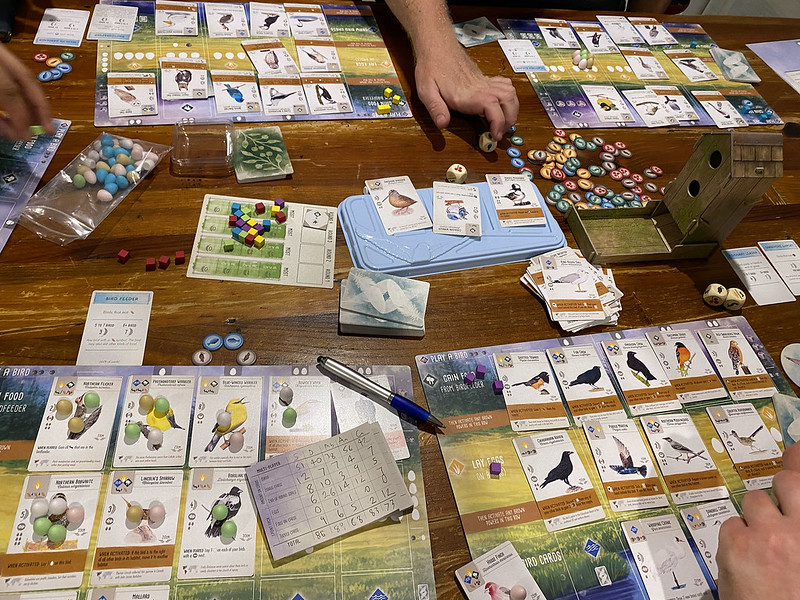 I had a lot of birds, with a lot of eggs. My birds were not worth many points compared to the other players, but I had so many eggs that I won the game by 3 points! (89 on the score sheet in the photo.) It was a fun game, and I’m definitely keen to try it again.

The other guys were all ribbing me during the game, saying I’d find factual errors or stuff on the bird cards, since I’m interested in birds. I don’t recall the details, but I certainly made some erudite bird comments during the game, which only served to prove their point!

I got home late, so didn’t make a post last night. Today, Saturday, I spent the morning cleaning the bathroom and then making one of the new Darths & Droids strips that we write last night. And then after lunch my wife and I went out with Scully to a market, to meet her mum and sister there. Scully got to chase ducks and geese, which I don’t think she’s seen before. The geese were three times her size, but she was keen to chase them! The market ate up the afternoon, and then this evening we went out for dinner at a Greek place near us – that was established in 1969, so is celebrating its 50th anniversary this year.

Today was warmer, and the sky a smoky grey all day. This smoke is really starting to get to people, me included. It feels like we haven’t seen blue sky for weeks. And the outlook isn’t good either, with forecasters saying it will most likely hang around Sydney for weeks, if not months. Blah.

One thought on “Friday/Saturday Double”