It’s Saturday, and the first day of what is effectively a four-day weekend, since my wife has taken Monday off work and Tuesday is Australia Day.

I started with some housecleaning, doing the vacuuming. I was planning to go for a run for some exercise, but when my wife got back in after taking Scully out first thing in the morning, she said it was already really hot outside. South-east Australia is experiencing heatwave conditions this weekend, and we could certainly feel it soon after sunrise. So I nixed that idea for another day.

I drove my wife to yoga class, and later in the day I took Scully for a drive to the pet shop, so we could get out of the house and do some walking around, without being out in the sun. Scully likes to sniff and explore all the nooks and crannies in the pet shop, so it’s a good place to go when the weather isn’t good for outdoor walks. And it’s inside a small shopping complex with a lot of furniture and homewares shops, so there’s plenty of other places to walk around too.

This evening, after dinner, we all went down to the harbour to film the remaining shots of my Outschool video, which I began filming on Thursday. I wanted to do the intro and ending by the water, with the city and the Opera House visible behind me. The area there down by the water is often busy, and there were a lot of people down there today having picnic dinners, or just walking along the waterfront. So I had a lot of curious onlookers as my wife filmed me reciting my lines. Hopefully there are some good takes and I can cut the video together in the next few days.

Today was busy! First off the bat, I needed to go do the weekly grocery shopping. I’m planning to play golf tomorrow with a friend in the morning, so my usual Friday morning expedition to the supermarket won’t be possible. And later in the day gets busy, which I want to avoid. So today it was.

After that, I’d arranged to meet another friend late morning to do some video filming. I want to make a teacher introduction video for Outschool, and I had the idea to film some of it at Sydney University, since that’s where I studied for my degrees. Unfortunately I had a problem when I got my microphone out, because the battery had leaked, so I had to clean that up before leaving home. My friend bought me a new battery and we met up to head to the university and film segments in front of the main Quadrangle and the Physics building.

This took us about an hour, and it was hot work because it was very warm and we were out in the midday sun. After finishing that, we we went to The Pie Tin for some pies for lunch. I had a Reuben pie and a truffled chicken and mushroom. Excellent as always from this pie shop, but with two pies I was extremely full afterwards, and planned on a relatively light dinner tonight.

This afternoon was less busy, with some going over the video we’d filmed to determine the best takes of each shot, code debugging, and thinking about what topic I can do for my first class on Outschool. I need to think of a topic that I can cover in a single class, because they recommend a one-off class for new teachers – obviously because parents might want to try just a single class rather than signing up for a semester long course with a teacher with no reviews.

I’m considering doing colour perception, because it’s both interesting and it’s a topic that nobody else on Outschool is teaching yet. If I did something like “astronomy”, then I’d be competing with dozens of other people doing the same or similar material. So I might work up a colour perception class over the next few days and get that ready for when I complete my intro video.

Today I thought I’d try making a video of part of the walk I did for exercise, in this time of social distancing when we’re not supposed to leave home for anything but essential activities (of which exercise is counted as one).

I took the video using my phone, mounted on a small handheld steadicam gadget that I got from a Kickstarter a few years ago. It helps smooth out the shakiness of walking while holding the phone, but it’s not perfect. I didn’t speak while walking, but added some comments using a microphone once I got home.

And here’s the walk route, marked on a map of Wollstonecraft, Sydney: 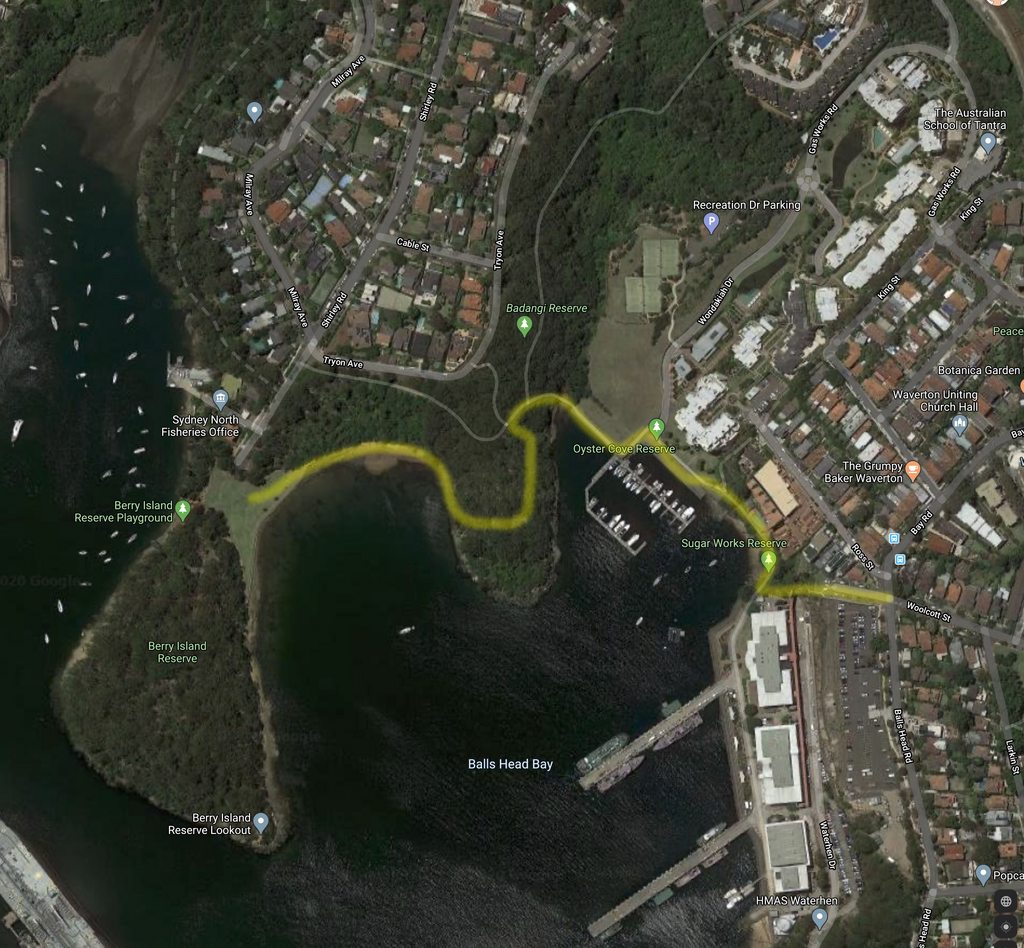 Hopefully this will be a nice virtual walk for some of you who might not have had much chance to get out and about recently.