It’s Monday, the day of the week when I finish off a week’s topic in my Outschool ethics classes. I finished off the Golden Rule topic with four classes, and in between I worked on the new topic starting tomorrow: Teleportation. This is one of the speculative topics, in which I get the kids to imagine that some science fiction or magical thing is real, and then use their brains to imagine what effects it would have on the world. I also wrote some scenarios such as what if a teleporter malfunctions and we end up with two people – one at the departure point and one at the destination. And then we get into the whole thing about whether teleportation would be acceptable if it involved making an exact copy and disintegrating the original. Should be fun!

That used up most of my day. I found a bit of time to work on editing some photos from my road trip to Orange back in September and uploading them to Flickr, then including them in my diary that I posted on my website the other day. I did the first three days and have two days to go.

Here’s a view of a winery that we visited on a rainy, foggy day: 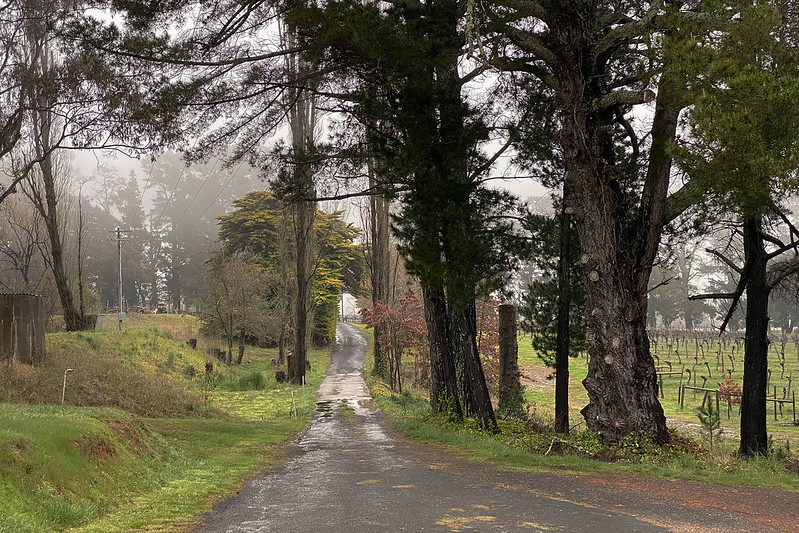 I also realised that some of my older travel diaries involved road trips and could use maps added to show the routes, so I added those to my to-do list.

And this evening we had a power outage! The power went off at about 6:15pm. Checking the power company website on my iPad indicated that it was a suburb-wide outage, and they estimated about two hours to fix it. So I was a bit glad that I haven’t yet converted from gas cooking to induction, because it meant I could still cook Thai curry and rice for dinner. I had to light the burners with matches, but otherwise it was fine, and we ate sitting out on the balcony in the dying evening light.

The power came back on a bit before 8pm, fortunately before we had to get the candles out.

2 thoughts on “Pondering about teleportation”