This morning my wife and I went out to have some breakfast at the cafe near Eigelstein-Torburg that opens at 09:00. They had two choices of muesli: Nußmüsli and Früchtesmüsli. Both had nuts and fruit in them! We ordered one of each, and when they arrived it seemed that the major difference was actually that the nut-muesli had toasted muesli chunks, whereas the fruit-muesli had raw rolled oats. There was no indication whatsoever of this difference in the menu listings. They were generous serves with yoghurt, a very filling breakfast.

After eating we went back to our room to pack some laundry into a bag for me to take to a laundry we’d found in Ehrenfeld yesterday. We left the room and my wife left me at the station, where I caught a train to Ehrenfeld. I found the laundry and asked if they spoke English, but the woman there said she only spoke German. I tried to indicate that I wanted the clothes washed for pickup tomorrow, but we had a miscommunication that I only realised after I’d left. She thought I wanted them this afternoon, not tomorrow afternoon, and quoted me a high “express” price, and said I couldn’t have them before 16:00, which was too late for my planned pickup time tomorrow. Also, she said they’d only do pants and shirts, not underwear and socks. And the quoted cost was 31€, which was way more than I wanted to pay. So I ended up leaving without dropping any of the laundry off, and only figured out the communication error on the train to Horrem.

At the meeting I had the same peanut soba noodles as I’d had on Monday for lunch. I enjoyed it on Monday, and felt it was healthier than the chicken schnitzel option we were presented with yesterday when choosing our lunches. Technical sessions today were on camera resolution measurement (which included a technical presentation by Bosch on difficulties they had measuring wide angle automative cameras using the ISO standard), the RIMM and eciRGB image file formats, and a new project on pixel-related camera specifications.

After the meeting I went back to the hotel. My wife was waiting for me at the station, having found another laundry where we might be able to drop our clothes. It was on the way to walking to dinner tonight, and open until 17:30, so we had time to go back to the hotel and drop my bag before heading there. This was a much better result, as the guy there spoke English and he was fine to was everything, although he insisted on having to do it as two loads to separate the lights and darks. Even when we said we just wash them together he said he wouldn’t because he’d be responsible if any of the colours ran. Anyway, he said we could have them back around 15:00 tomorrow, which was perfect. I can probably pick them up on the way home from the meeting tomorrow.

We walked slowly onwards to our dinner at Belgischer Hof – a place we’d eaten last time in 2019 and thoroughly enjoyed. We had some time to kill before our booking, so we stopped in some fo the trendy and funky shops along the way, looking at art, photography, homewares, books, and antique kitsch.

At Belgischer Hof, we were shown to a small room up the front, different to the large room out the back where we’d eaten last time. Our waitress spoke decent English and we ordered the Vorspeisenvariation, a mixed appetiser platter for two people, plus flammkuche. One had brie, radicchio, green onions, apple, and almonds, while the other had Reblochon cheese, tomato chutney, rocket pesto, and shiitake. Quite the mix of ingredients! All six of the flammkiche on the menu were completely vegetarian, so we had plenty of choice. The appetiser board was amazing, with three small jars of differently spiced salads made with lentils, chick peas, bulgar wheat; some dark rye bread; a fish tartare (I suspect it was herring); curry waffles; a green salad; a goat’s cheese and tomato brûlée; pickled beetroot; slices of ham; and small chunks of some sort of roasted meat (I suspect pork) with mushrooms. We were getting full already after this, so it’s lucky flammkuche are not too heavy! 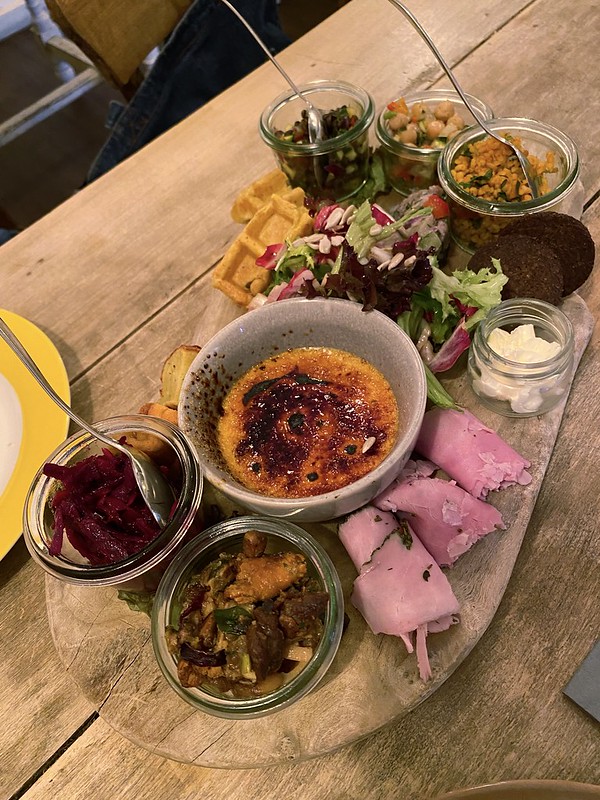 Stuffed to the gills, we walked home slowly. We were lucky to beat the forecast thunderstorms, which were predicted earlier to break around 20:00, but now we’re back at the hotel the forecast has been pushed out to around midnight for the onset of the storms. Hopefully they will cool things down a bit, because it was too hot today. 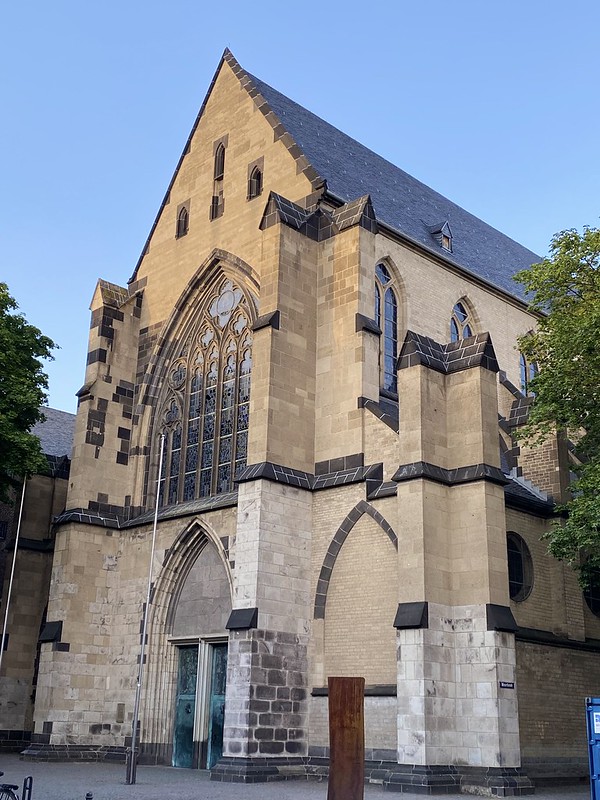