COVID case numbers for New South Wales – 65 new cases in the past 24 hours, plus 97 yesterday (Wednesday) and 89 on Tuesday which I didn’t report. Down on the peak of 112 cases we had on Monday, but still too much, and too early to know if it’s a downward trend or just day to day statistical variation. With that, the Government announced that the current Sydney lockdown will continue for (at least) another two weeks, until the end of 30 July.

There’s been a lot of criticism of the Government for making this lockdown too weak and wishy-washy. Although the rules say that you can’t leave home except for “essential work that can’t be done from home” the Government refuses to define what is “essential work” or what “can’t be done from home”. Which means effectively that any boss who thinks their workers need to be in the office instead of working from home can just say “you have to come into the office”. Also a lot of retailers are staying open, and calling their staff in, because the Government refuses to define what is an essential business. So, for example, you can go shopping for jewellery, because the Government refuses to say that jewellery shops aren’t essential, so jewellers are all staying open, because if they close, then their competition will get all the business.

So there’s incentive for businesses to stay open, and neither incentive nor direct order for them to shut down and keep their workers at home. In the previous Sydney lockdown last year, we had Federal support with payments for people whose work was impacted, which meant businesses could shut down – but not this time.

Epidemiologists are saying that with the current restrictions and behaviour, they can’t see infection numbers going down before the end of August. Australia had been doing so well up until three weeks ago, but now we’re being undone by politics. It’s very annoying.

Fortunately I’m in an area of Sydney that hasn’t yet had any COVID exposure site alerts. But my brother lives in a region which is pretty much the epicentre of the current outbreak. In that local area there are additional restrictions, including that anyone who travels to work must get a mandatory COVID test every 3 days. Fortunately he’s been staying home from work and basically not going out or seeing anyone at all.

One valid reason to leave home is still to take exercise, so my wife and I took the chance to go out at lunch together today to walk Scully. It was actually a gorgeous day, with the temperature reaching 23.4°C, making it the warmest day so far this winter. We went to a park by the harbour and let Scully run around and chase a ball. My wife asked me if I could take a photo of Scully running towards the camera. I’ve done this a couple of times with my DSLR, but I said that it wouldn’t really work with a phone camera. 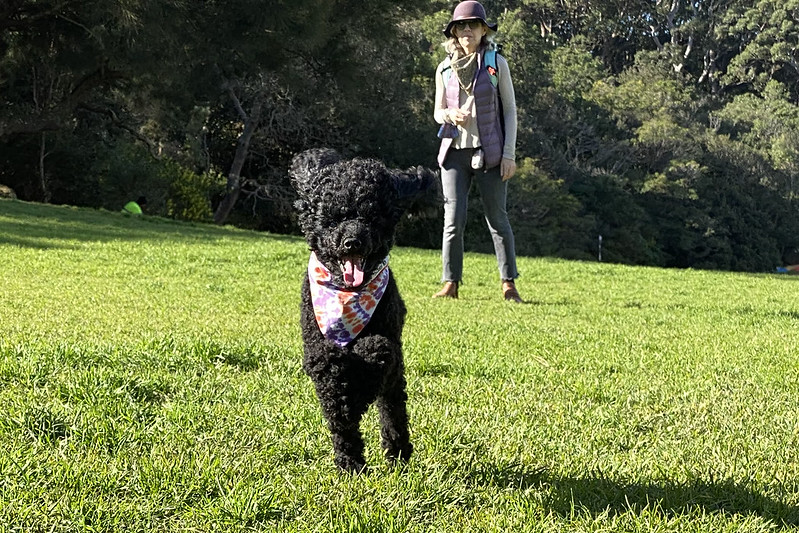 I think I may have been wrong… 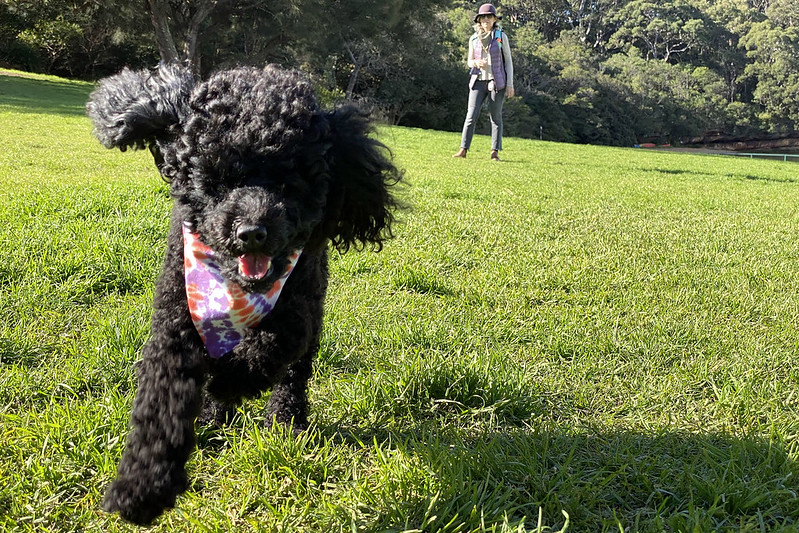 The focus isn’t quite where I’d like on the second one, but still not bad for a phone!