This morning I took Scully for a walk and along the way passed a banksia tree which had a couple of rainbow lorikeets feeding on the flowers. I was pretty close, and wondered if I could get close enough to take a decent photo with my phone (which like all phones doesn’t have much telephoto capability). I was within a step or two of the tree and aiming the phone, but I scared the birds away. But I was reasonably quick on the shutter button, and managed to get this. 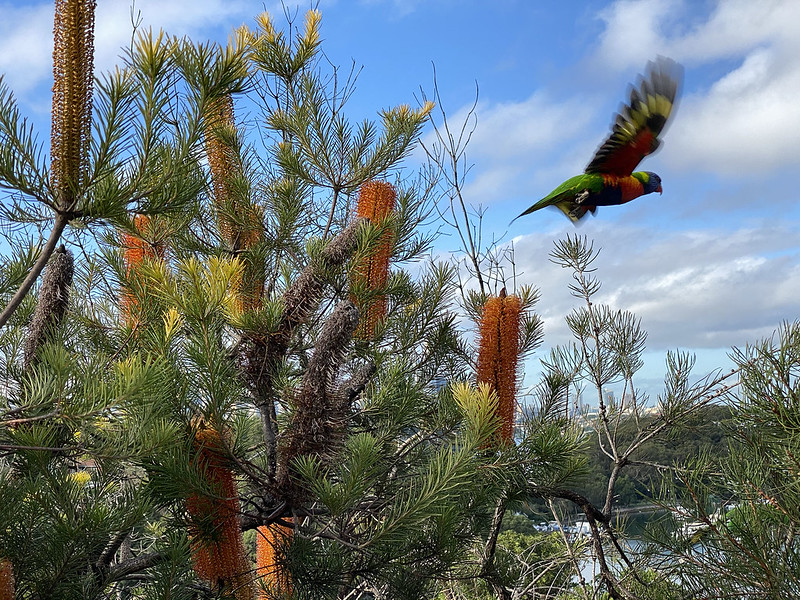 Not too bad for an opportunistic shot.

I spent some time updating the Magic: the Gathering Goldfish Draft website that I maintain, adding/updating results from tournaments and adding a bunch of the card lists we used. You can now see the evolution of the card list as we gained experience with various combinations and the potential for ludicrous scores. The recent tournament we did (mentioned here when I was actively playing it out) now has the scores in.

My score was 10148.9 points, or 7.775×10148 in standard scientific notation. You might think this is a pretty high score, but that only managed to place me sixth out of eight players. The winning score was about 10↑↑↑4 (using Knuth’s up-arrow notation for large numbers). Suffice to say this number is so large that it’s impossible to write it down in the form 10101010… because the number of 10s you’d need to add to that continued exponentiation itself is too large to write down.

Yeah, this is pretty nerdy stuff.