Today was the big market day!

I had my very first market stall for my fledgling photography business today. It was a brand new venue as well, for a relatively small local suburban market. They have a regular monthly venue, but were trying this new venue for the first time. So I think the attendance was probably a little lower than could be expected for an established venue.

It ran from 9am to 2pm, and ramped up and then back down in attendance, being busiest just before lunch. There were food stalls outside, so I think that attracted people at lunch time. My stall was indoors, which I was grateful for because it was a warm, humid day.

I had no idea how much business I’d get. I was really only hoping to cover the cost of the market stall itself and make a bit of a profit. I was selling greeting cards, 30×20 cm matted prints ready to frame, and 60×40 cm board mounted prints ready to hang. Here’s my stall after setting up for the day: 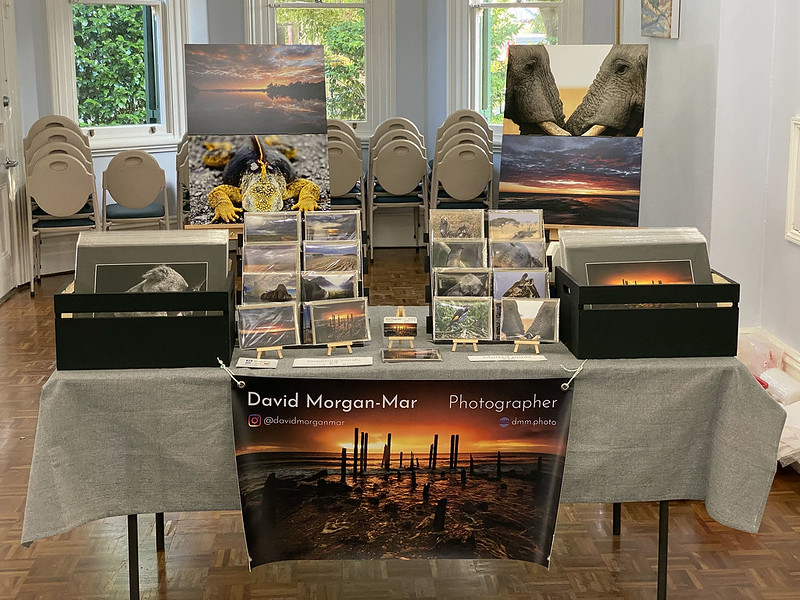 A lot of people walked past my stall with a quick glance, rapidly moving on through the other stalls – but that was fine, I expected that. Anyone who let their eyes linger for a few seconds I tried to say hello to, which attracted a few to come closer. Anyone who stopped to look at my products I tried to engage in friendly conversation, letting them know that (a) I was the photographer, and (b) the animals were all photographed in the wild, not in captivity. I settled on this routine after the first few potential customers all asked if I’d taken the photos. I’d thought that would have been obvious given my name on the banner with the legend “Photographer”, but I guess they didn’t know if “the photographer” was the same as the person tending the stall. 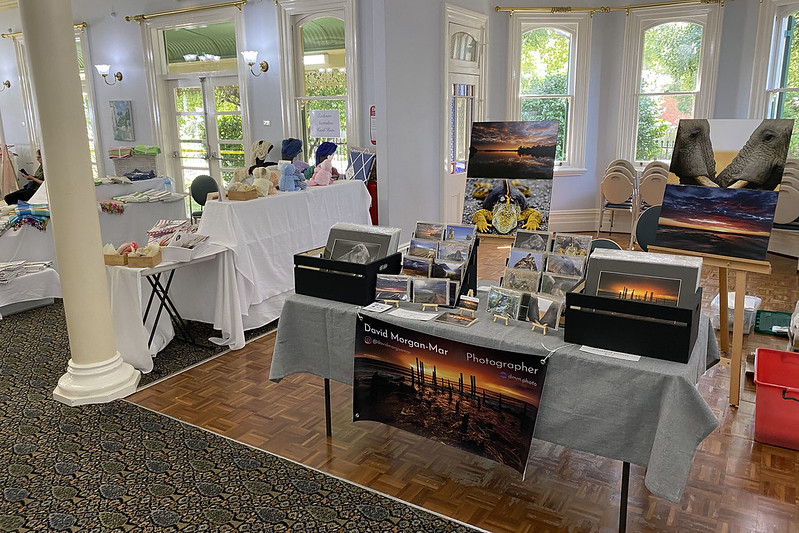 My stall had this prime position on the dance floor of the old stately home, which has now been converted into a wedding and function centre. Next to me was a woman selling hand-knitted stuff and tablecloths and napkins and things. At one point she left for a few minutes and I minded her stall – and sold some stuff for her! There was another woman across from me selling washi eggs -I had a chat with her and it was only her second market day.

I had a few good chats with some people as they browsed through the photos. Many complimented me on the photography. Some of the most enthusiastic were children, who loved the animal photos. My first big sale was when a boy, maybe 10 or 11 years old, took a liking to my yellow iguana photo, and asked if he could have a large print for his bedroom. His dad asked where he’d put it, and there was some negotiation, but eventually dad stumped up his credit card for a 30×20 cm print.

I sold a total of 35 greeting cards, and 4 matted prints. I was holding out a hope that one of the large mounted prints would sell, but today wasn’t the day. The sales totalled approximately 4 times my stall rental cost, so that’s good! I made money!

The most popular photo by far was the black and white koala, followed by the elephants. But there were definitely people with a penchant for landscapes, picking a few of the greeting cards of those. Nearly every photo sold a greeting card or two, the most notable exception being the vulture in flight, which I was a bit unsure about myself, but included in the selection when some friends of mine said they’d buy it.

If you consider it to have been one full day’s work – 5 hours active selling, plus an hour each side setting up and tearing down – and I multiply it up to a yearly income, I actually made a pretty decent salary. Of course, I’m not running a market 5 days a week, but at least it’s a decent hourly rate, so I’m pretty happy. I also handed out a lot of business cards, and if even one of those people visits my website and makes an online order, that will make the return pretty respectable.

So, a long way to go and continue working on this, but I’m calling today a success. I have another stall in 2 weeks time, this time at the established venue of this market, so hopefully there will be more people coming through and seeing my stuff.