A couple of months ago I received an invitation from the University of Sydney to attend a celebration function for the career of my Ph.D. supervisor, Professor Richard Hunstead, as he retired. The date was to be Friday 14 February, with an afternoon of reflective talks by his colleagues, followed by an evening of drinks and canapés. I accepted the invitation.

Two weeks ago, I received another email from the University. Dick (as he was known) had suddenly fallen ill and passed away. The event would go on, now as a celebration of the life of this distinguished researcher. I felt less inclined to go to something where the mood would be so different, but yesterday afternoon I went.

I saw and spoke with many old university friends and teachers who I hadn’t seen in many years. The afternoon of talks consisted of reminiscences by several of Dick’s closest colleagues, a couple of whom had been fellow students with me back in the day. Many people who Dick had taught went on to very successful careers in astronomy – I felt a bit like the odd one out, having left astronomy and moved into a career in photographic research. But the crowd felt familiar, because during my years as an astronomy Ph.D. student I moved in the same circles as this distinguished group of people. The Australian astronomy crowd is a large family, and does some of the best astronomical research in the world.

Dick in particular had many achievements over his long career. Many I knew about, some mentioned by the speakers were new to me. In the early 1960s, radio astronomers discovered the strange radio source named CTA-102. Early observations indicated that the signal strength varied, and in 1965 Gennady Sholomitskii proposed that it might be a “beacon” set up by an advanced extraterrestrial civilisation. This was two years before Jocelyn Bell’s discovery of the first pulsar, which was also at first suspected to be an alien radio beacon – making it the first astronomical object seriously suggested as a potential sign of an alien civilisation. This caused a sensation in 1965, and The Byrds wrote a song about it, released on their 1967 album Younger Than Yesterday. Mount Palomar Observatory found an optical counterpart to the radio source, identifying it as a quasar, which removed the idea that it was an artificial radio beacon.

Dick came into this story over the next few years, when he was the first to observe CTA-102 at relatively low radio frequencies, using Sydney University’s Molonglo radio telescope. The received wisdom of the time was that variable astronomical radio sources only varied at high radio frequencies, in the GHz range. Molonglo observed at 408 MHz, well below the range that anyone thought radio variability occurred. With three years of careful observation, Dick showed that CTA-102, and three other sources, varied with time at this low frequency as well. This transformed our understanding of quasars and radiogalaxies, and laid the foundations for physical models of the processes that power these objects. 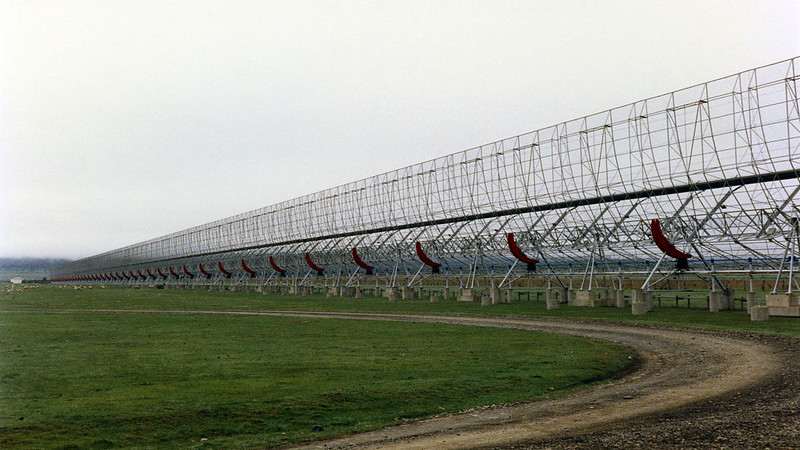 [The Molonglo Telescope (my photo, during my honours year physics project, working with Dick).]

Dick was also a pioneer in the detailed study of the Lyman-alpha forest of absorption lines in the optical spectra of quasars. This is work that I know very well, as it was the subject of my Ph.D. thesis, working under Dick’s direct supervision. 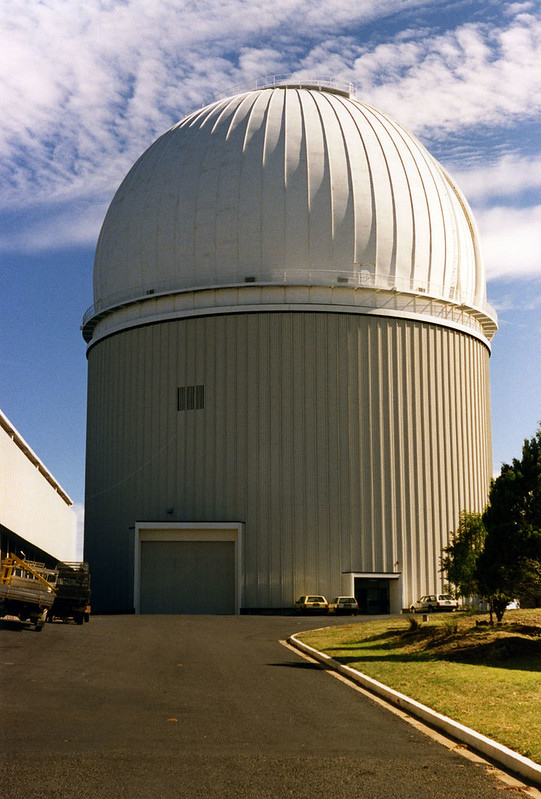 [The Anglo-Australian Telescope (my photo, where I did my observing during my Ph.D.).]

Besides his research, Dick was also passionate about education. He ran the second year undergraduate physics labs, and sometimes the first and third year labs as well, for many years, from when I was a student until fairly recently. He participated (as I learnt yesterday) in numerous education outreach programs, encouraging young people to pursue training in science, and collaborating with teachers and other groups to set up science education programs.

My last interaction with Dick was late last year, when I returned to the university for the first time in many years, to seek him out and request to borrow some lab equipment, for use in my own science education efforts with Brookvale Public School. I wanted some lasers and diffraction slits and other stuff to do experiments with my Science Club. Dick was keen to help and offered all the resources he had to give.

As I heard during yesterday’s event, this generosity of time and effort was repeated across the hundreds of students and colleagues who Dick mentored and worked with. The common theme to all the speakers was how Dick had boundless energy to share his enthusiasm for science with others and to actively encourage people, without prejudice, to develop their interest in astronomy. A good friend of mine told the story of how she, as a brand new first year undergraduate, ventured timidly into the astronomy department to ask if there was anything that she could do to participate in some sort of astronomy work. Normally only students in their fourth year are assigned research projects by the various physics departments, so a first year asking for additional work was very unusual. The first person she came across told her to go to biology because “that’s better suited to girls”. Undaunted she returned a few days later to try and find someone else. She met a professor in the corridor and asked the same question: was there some sort of astronomy project that she could possibly help out on? That professor was Dick, and he immediately gave her some real data, showed her how to book time on the computer system, and how to analyse it. That girl is now a professor in the same astronomy department.

Dick has left a huge legacy at the University of Sydney, in the Australian astronomical community, and in global research. Dozens, if not hundreds, of highly successful astronomers and scientists in other fields (e.g. me) owe their careers to Dick and his positive influence.