Friday was fortnightly games night with my friends (so this update is a few hours late, posted Saturday morning).

I spent the morning working on some scripts for Darths & Droids comics, to prepare for a group writing session before we got stuck into the board games. Sometimes at the writing sessions we sit staring at a blank screen for a while before figuring out what the story action is supposed to be. To avoid this loss of time, it helps if I write skeletons for strips containing the major plot points as dictated by the screencaps we’re using, which we can then either tweak or just fill in with jokes during the group writing time.

When we assembled early to start writing, it helped a lot, and we breezed through writing a batch of scripts for the next few comics. When I say “breezed through”, I mean at one point we spent 10-15 minutes discussing a single word of a script, looking up synonyms, trying alternatives, arguing about it, until we finally settled on the right word to be used – and then of course another 20 minutes or so going through the repercussions to the rest of the script and the plot of choosing that particular word and redrafting several other lines to make the word choice more significant.

We do this sort of thing quite a lot – during this process we recollected one time a few years ago when we’d spent almost an entire 2-hour lunch break arguing about the pluralisation of one word. An argument that continued later that day, and into the next week, including one of the writers logging onto chat during his honeymoon to continue the argument remotely. (When I say “argument”, these are academic arguments with points of logic, rhetoric, and carefully phrased rebuttals, not shouting matches. Mostly.)

After successfully completing the day’s writing goal, we turned to games. We still had some games from last fortnight’s Magic: the Gathering draft tournament to complete, so those players peeled off to do that, while others joined a couple of non-Magic players to start board games. Because people were in and out of Magic duels, we stuck to short games, rather than start anything too long. I played my last game of the tournament, and finally drew the Ancestral Recall that I’d drafted, so I got to cast it for the first and only time of the tournament. It didn’t help though, as Andrew S. used Armageddon to destroy my lands while he had creature advantage, and I couldn’t recover in time.

I played games of Magic Maze, Junk Art, Bärenpark, and a new playtest of the game that Andrew S. is working on developing: The Queen of England. 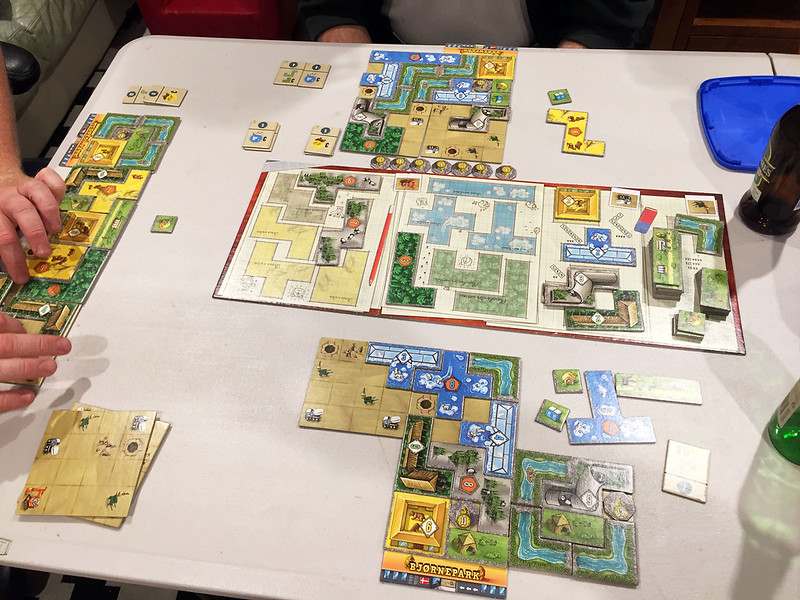 The photo shows Bärenpark in progress. My bear park is at the bottom, Andrew C’s at left, Andrew S’s at top. Final scores: AS 96, AC 95, me 93. This game is often extremely close in scores at the end. Unfortunately I made an error in reading one of the symbols on the bonus tiles, and so concentrated on getting statues instead of sun bears, which probably cost me a few points, but oh well.

The Queen of England is a game that AS has been developing for a while now, and it seems to be approaching a version playable enough for commercial development. It’s a deck building game with vague similarities to Dominion, but with a board and area control components that add a big chunk of tactical depth. We may be ready for a wider playtest at some stage – I’ll have to ping Andrew about that.