I was reminded today of just how horrible humans can be sometimes.

I decided to walk up to the fish & chip shop near my place to get some lunch, and then out to my favourite eating spot. It’s a lookout at the end of a street, perched on a hill with a view of Sydney Harbour. Not the grandest view, but a pretty nice one, and convenient for me to walk to. This is the spot where I mentioned magpies accosted me and my meal recently. No magpies today, thankfully, and this was the view: 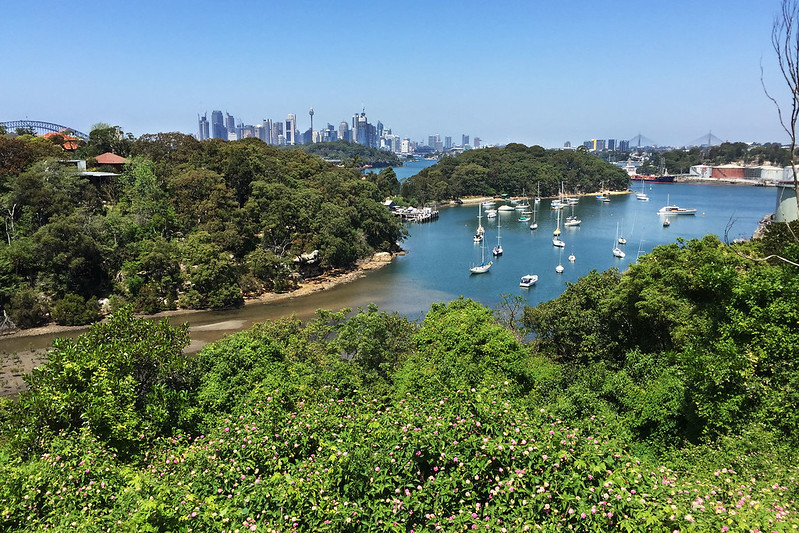 Lovely, right? Here’s a panorama to show more of the surroundings:

At the left of the panorama you can see the wooden bench where I usually sit to eat my lunch. There’s also an old white wooden chair frame, but the seat is missing – I don’t know why it’s still there. Anyway, here’s a closer shot of the bench: 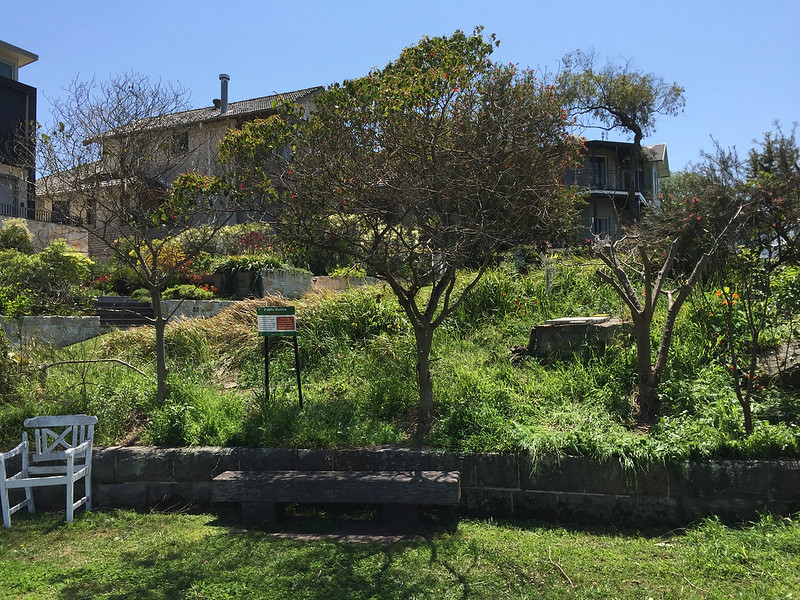 This is where it gets nasty. See the trees, the partly foliaged one in the middle, the deadish looking one on the left, and the one on the right with many branches removed? Normally these trees have very full foliage and provide a deep, full shade to the wooden bench, making it perfect for sitting on. Today, as you can see, the bench is at best 30-40% shaded, with the hot spring sun burning down on the rest. What’s going on? And wait… what’s that sign? 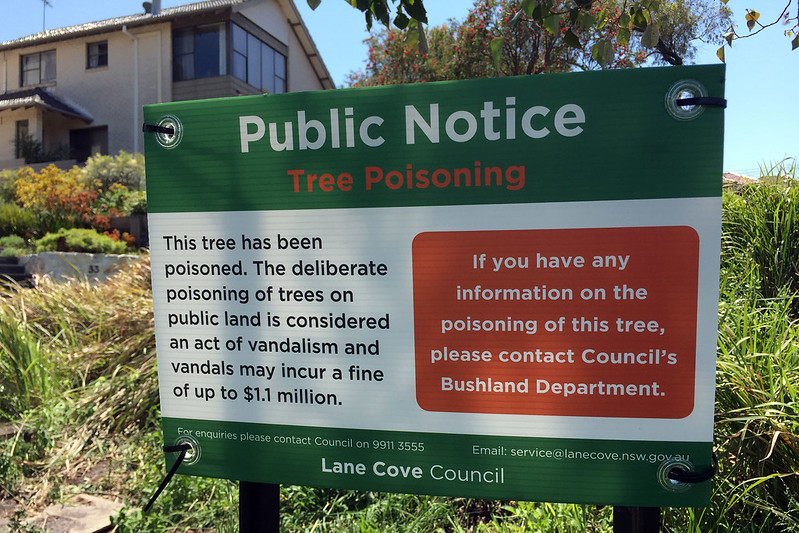 Some inconsiderate bastard has illegally poisoned the trees! This is unfortunately not an uncommon occurrence in Sydney, almost always around the harbour where some inconvenient tree happens to block the waterfront view of someone’s house. When these trees are fully dead and gone, the views from the houses behind them will take in considerably more of the harbour (and will provide no shade at all to my lunch seat). As you can see, tree poisoning is such a serious concern in Sydney that the law provides for fines up to $1.1 million – if the culprit is caught. 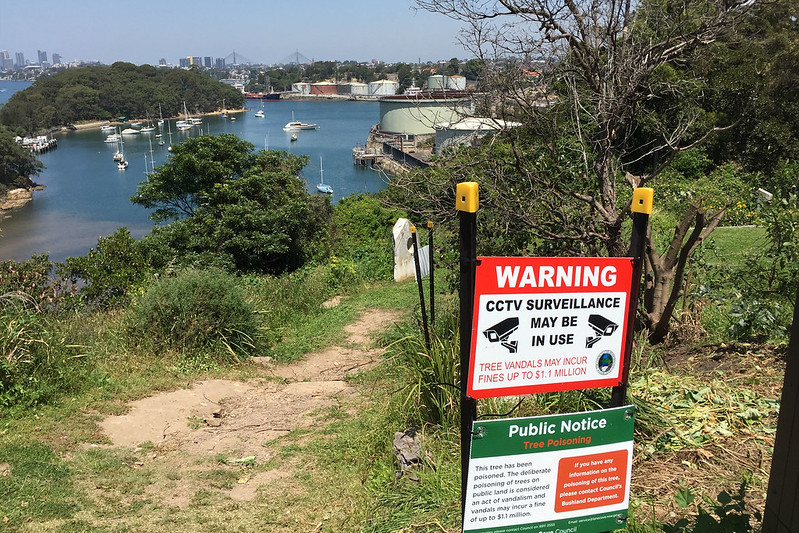 The council may have installed some CCTV cameras to keep a watch on the area, but I fear it’s too late. There have been some successful prosecutions for tree poisoning in Sydney, but often the perpetrator gets away with it due to lack of evidence.

On a brighter note, this morning I did another 5k run. I tried to push myself a bit faster than last time, and managed to drop my time from 6:25/km (8 Oct) and 6:19/km (15 Oct) to 5:52/km today! I still feel there’s a decent amount of improvement to go, so I’ll be keen to keep this up and try harder next time. Also, I can feel that my body is getting used to the exercise – I don’t feel nearly as sore as after that first run.

And otherwise I’ve been preparing for my trip to Germany tomorrow. I’m flying to Frankfurt via Dubai, then getting a train to Essen. On Sunday I’ll be attending the Spiel board game exhibition. The Monday morning I get a train to Cologne for three days of ISO Photography Standards meetings, before flying home on Thursday. I arrive back home Saturday morning, 2 November, so I’ll be gone just over a week. I’ll try to post updates from over there, but may not manage it – I’ll have to see.

One week after my first 5k run of the current exercise plan, I returned to the oval today to clock up another 5 kilometres. Again I alternated sprints and walking segments, though I did a few longer sprints than last time. Overall, last week I clocked 6:25 per kilometre, and today 6:19 per kilometre, so that was an improvement! And I don’t think my legs had fully recovered from last week either – they were already a little sore at the beginning.

I walked home from the oval through the Gore Hill Cemetery, which is an old historical cemetery, decommissioned some years ago, and now overgrown, with most of the graves forgotten and untended. There’s an angel headstone here which is one of my favourite photographic subjects. Her mood changes with the season and the weather. Today she was in a spring mood: 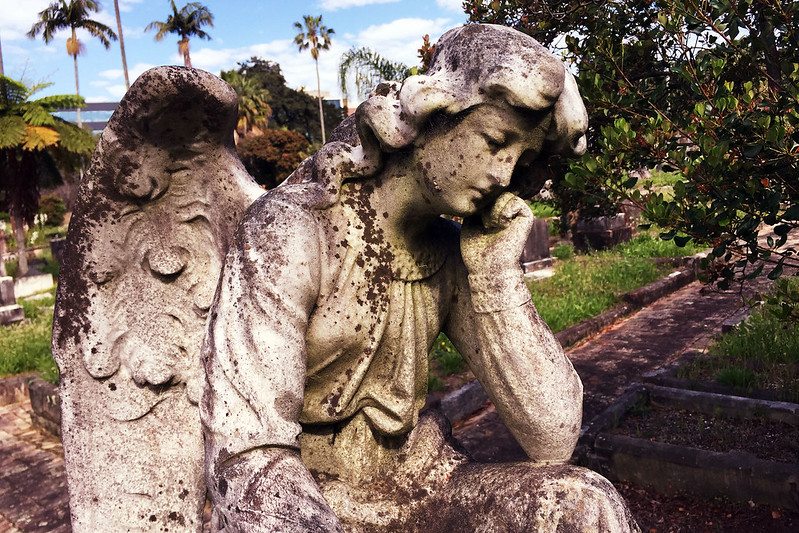 This afternoon I worked on some website coding for a new project that I’m not quite ready to announce yet. And my wife and I took Scully for a walk down to the harbour where there’s a park where she can run around off leash. For dinner I was going to make pizza, but I forgot to buy cheese today! So we converted to pasta instead, with a pumpkin, walnut, feta, and chilli sauce. (Which would have been our pizza topping.)

This morning I took a drive to Sydney’s northern beach suburbs, specifically to Narrabeen, where there is a large lagoon. There is a walking track all the way around the lagoon, over 8 km long. I didn’t walk the whole thing, but rather only a small section on the southern shore, passing through some bushland. I took my camera and longest lens, prepared to photograph birds.

Near the car park were several ducks. These are Pacific black ducks hybridised with introduced mallards. Mallards are much more aggressive breeders and hybridise readily with the native ducks. This is a concern for local wildlife experts, because it’s diluting the pure Pacific duck genotype, and may lead to the elimination of the Pacific black duck as a species. 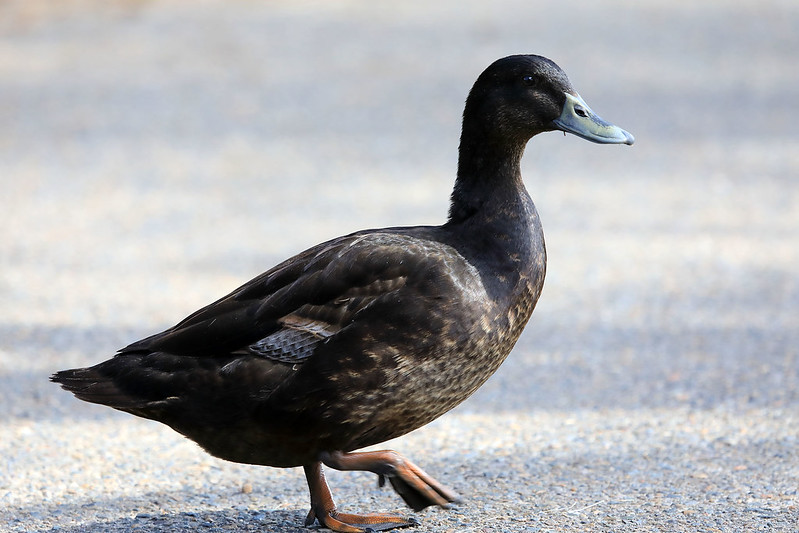 On the water were some black swans. Fortunately these don’t hybridise with the introduced mute swans that can be found in some places. 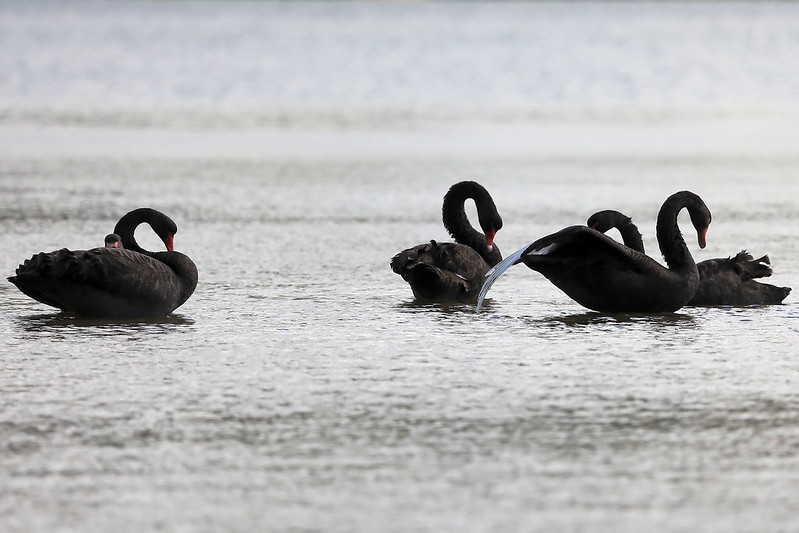 The next bird I spotted was one I haven’t photographed before, a sacred kingfisher. Unfortunately I only saw it in the distance through dense foliage, and my camera refused to focus on it, so I had to fiddle with manual focus. This was the only photo I managed to get. Still, that’s another one added to my list! 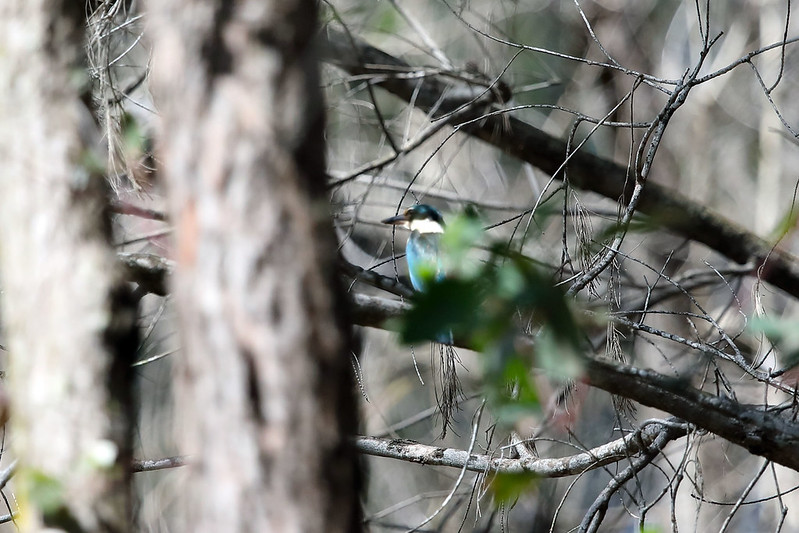 Next is an Australian king parrot, this one a male, distinguished by the red head. The females look similar, but have a green head. These are moderately large parrots – larger than most species apart from the cockatoos. They are usually found in mated pairs, so there was probably a female hanging around somewhere out of sight. They’re very conspicuous. There’s a mated pair living in the park across the street from my home. 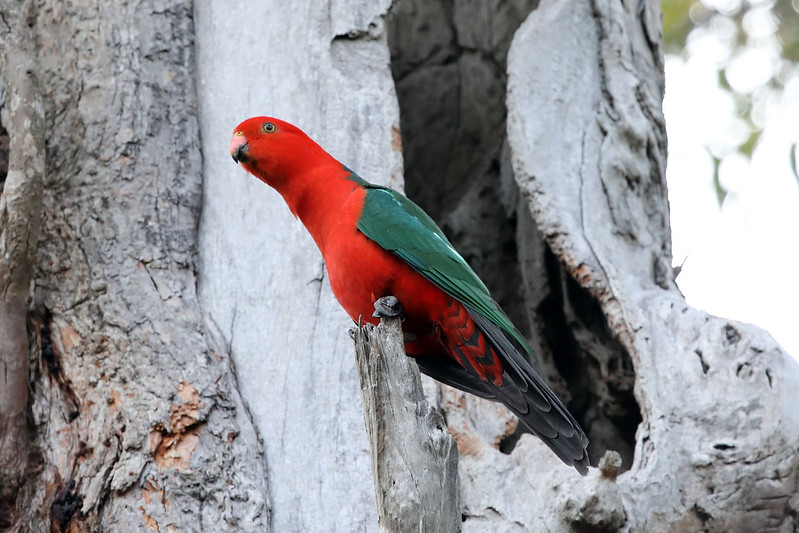 This is an Eastern yellow robin. These are fairly common, but tricky to photograph as they flit about a lot, and don’t sit in one spot very long. I have a few photos of these guys, but this might be the best shot I’ve achieved. 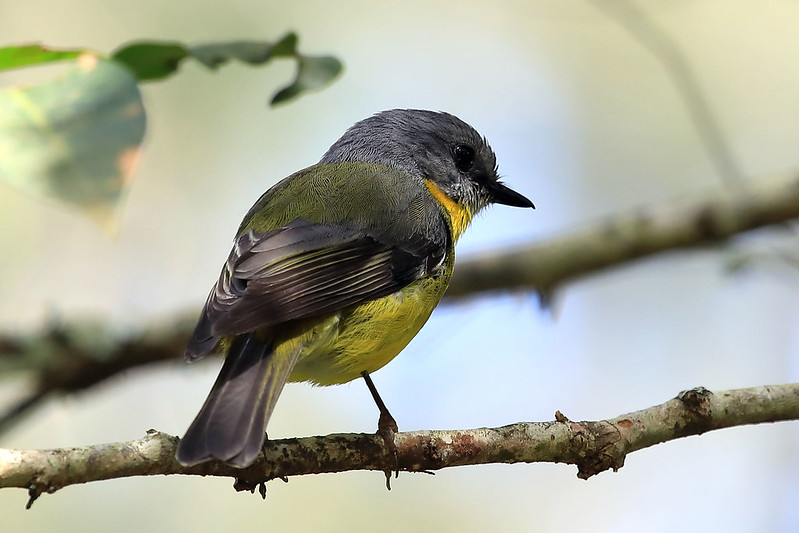 And finally, back at the water, were some little pied cormorants. These are pretty common and easy to photograph. I often see some around the harbour shore close to my home. 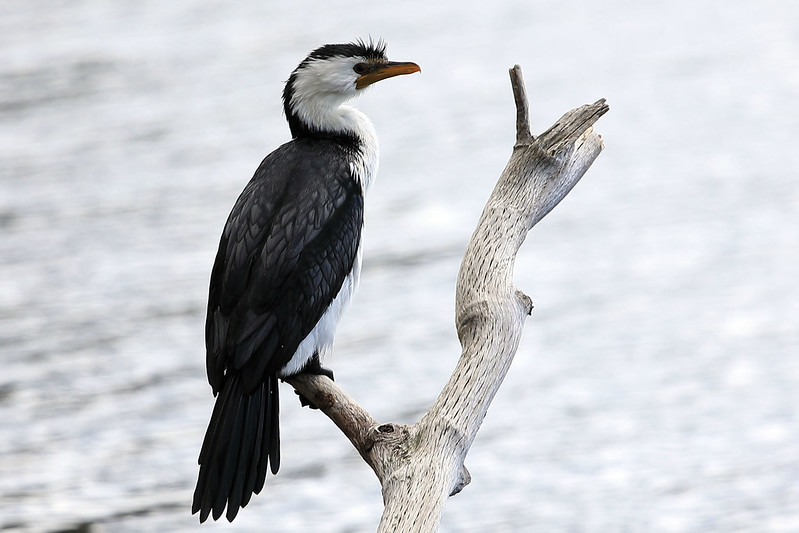 After completing my bird trek, I drove to Broomfields Pies, a place I’d found by searching for pie shops, seeking a new meat pie experience for lunch. The place had a high Google reviews rating, and the menu on the website looked very intriguing. I was hungry after my walk and looking forward to it, but when I got there I found the place was in the middle of an industrial park, and it was just a wholesale bakery without any retail shopfront. The front door was locked, despite it being the middle of the day, and nobody answered the door buzzer. It looks like I have a habit of driving to places in industrial parks that aren’t open.

So instead I hopped back in the car and drove a few suburbs over to another pie place that I’d been to just once before, and wanted to go back to. I had a satay chicken and a Mexican beef pie – they were good!

This afternoon I spent going through my bird photos, processing, uploading, and entering them into my bird photo database, punctuated by taking Scully to the dog park for some exercise.

My legs are so sore today after yesterday’s run. I clearly need to do more to get used to it.

Today was a writing day. I spent about 10 hours writing the next entry for 100 Proofs that the Earth is a Globe.

Daylight saving started here in Sydney on the weekend, and today was the first day back at work for my wife after the long weekend, so we got up early today. I decided to take advantage of the cool morning to go for a 5 km run. I don’t normally do running/jogging, so this was unusual and I did a mix of jog-sprints and walking in between to regather my breath. But importantly I walked up the hill to the nearest sports oval and then did laps, so I was on flat ground rather than running up and down the hills that are endemic in this area. I completed 5 km in about 32 minutes, which I guess is pretty slow, but it’s definitely faster than my walking pace. Let’s see if I manage to do this again and make it a habit.

After completing the run, I walked to the hardware store to get some plant fertiliser. We recently got a dwarf Tahitian lime, a chilli plant, and a basil plant to grow on the balcony, and figured we should get some fertiliser to help them grow. I got some citrus fertiliser and tomato/herb fertiliser, which says it’s also good for capsicums (green/red peppers in non-Australian English), so I suppose that works for chillis. Interestingly, the two different fertilisers contain different mixtures of coloured pellets – I presume they make a bunch of different colours that have different nutrients in them, and mix them in different proportions to formulate the mixes for different types of plants. 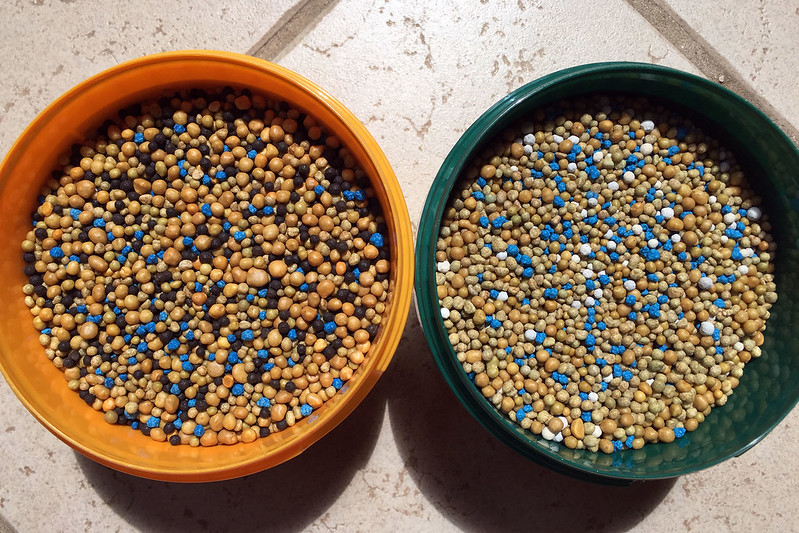 The lime tree appears to be growing some tiny limes already. It flowered a few weeks ago, and the flowers have dropped the petals and are swelling at the bases into what look like baby limes: 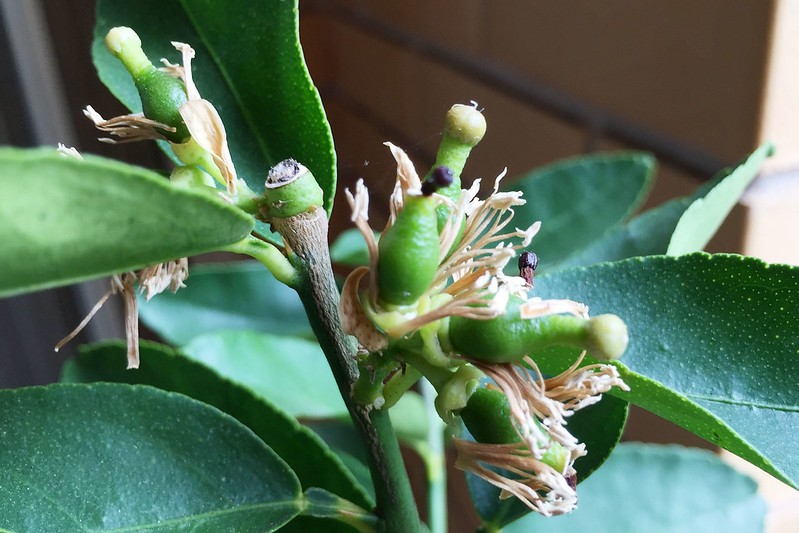 I wasn’t expecting a crop of limes for at least a year or two, but if we got some this summer that’d be awesome!

Oh, I also tried to buy a window squeegee with a slightly longer handle than the one I have at home, to make it easier to clean the outsides of our windows from the inside. However all the squeegees at the hardware store either had 250 mm handles (like the one I already own), or 1.8 metres! I want maybe a 400 mm handle, but there was nothing in between.