This morning I decided to kickstart some exercise routines again, and I went out for a jog around the streets. I didn’t want to start with a full 5k run, so I cut a large loop off my normal circuit, and also took the pace a little easier than when I was running regularly earlier this year. I did 2.25 km, and was feeling good at the end, like I could have kept going at least a bit longer. It probably helped that I skipped the hilliest parts of my normal route. Afterwards I did a stretching routine that I haven’t done for ages as well… my flexibility has decayed quite a bit.

I spent most of today working on new Darths & Droids strips. I also took Scully out to the dog park for the first time in weeks, now that the COVID lockdown restrictions have been eased back to allow you to meet with a friend or two in an outdoor setting, so long as everyone is vaccinated.

For dinner tonight, I made a pesto, pumpkin, and pistachio pizza. It also had chunks of fried haloumi on it, which added a nice saltiness. 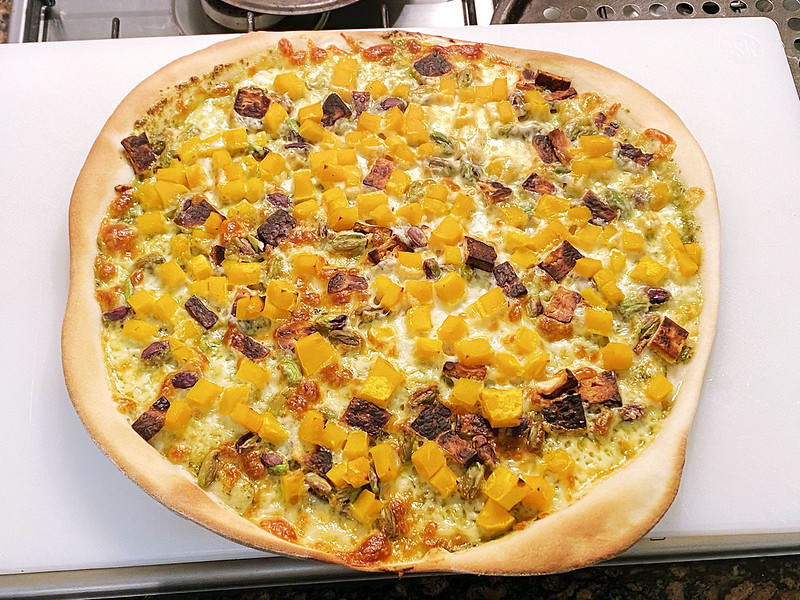 A friend pointed out that the haiku I wrote a few days ago had an error, with “frangipani summer” being 6 syllables. I completely missed that at the time! And there isn’t an easy fix either. Oh well. I claim the Japanese principle of wabi-sabi on that one!

But inspired by another prompt: “The Secret Lives of Vegetables”:

Not much I can report today, as I spent most of the day working on a plotting diagram for Darths & Droids, setting out planned future story events in great detail. Obviously I can’t show the result without revealing major spoilers for the story, so there’s not really much more to be said about that.

Um. The weather is cool and a bit rainy. Tomorrow we’re supposed to get heavy rain. I have a trip into the city planned – to do some Christmas shopping, and also to check out the Australian Museum, which has recently reopened after a major renovation, before it fills up with schoolkids during the imminent summer holidays. So tomorrow I should have more to write about.

I remember when the only RPG I owned was Dungeons & Dragons, but I wanted to play a science fiction game. So I did what many young gamers do and tried to design my own game system to support it. The result wasn’t great.

To really get good at designing RPGs, you need to be exposed to a wide variety of designs. You need to read different rule sets and play games with different mechanics. You need a breadth of experience. I have something over 20 different RPGs, possibly up to 30 (which is actually not a lot compared to many gamers), and so I now realise the first attempts I made at designing RPGs were laughably narrow-minded and amateurish.

On the plus side, designing a roleplaying game is actually not as complicated a task as what may seem easier: designing a board game. A board game is much more restricted in what the players can do, whereas an RPG is open-ended and allows players to do virtually anything. But paradoxically this very difference is what makes designing an RPG relatively easy. In an RPG, if a player wants to do something and the rules don’t cover it, you can wing it. If you’re experienced enough, you can even wing it so seamlessly that the players never notice.

In a board game, on the other hand, you need a clear cut rule to cover every possible situation that can arise in the game. You can’t just tell the players to “do whatever makes sense” or for one player to decide what happens. You have to design the rules carefully and meticulously enough that this problem never arises. That’s really hard.

Finally, in a tangentially related topic, I was playing Scattergories online with some friends today and needed to name a title that people can have, beginning with W. Other answers included the valid Wazir and Wizard. I opted for Walgraf, which I honestly thought was a noble title from some European culture.

However, searching the internet for confirmation turned up virtually nothing! The only two seemingly confirmatory hits were the rulebook for a LARP (live action RPG) named Blackspire:

12.12.6.1 Recommended title for serving a term with excellence as Champion in addition to winning the kingdom Weaponmaster tourney.

12.12.6.2 Recipient may substitute an equivalent title name for this rank such as Vicomte, Viconte, Visconte, Vizconde, Visconde, Walgraf or Pasha.

And the second is a campaign log for a D&D game set in the Greyhawk campaign setting:

Now… it’s odd that both of the references to the noble title of “Walgraf” on the net are related to RPGs. I thought it might be possible that the word was invented by an RPG author and I’d learnt the word from some of the old RPG books I own. I checked the World of Greyhawk books, and they have a list of noble titles, which includes “Graf”, but not “Walgraf”.

So this is a mystery. From where did I learn the word “Walgraf” as a noble title? And why does it appear in two places on the net, both of which are related to fantasy roleplaying games? I am truly stumped.

Early this morning I took to the local golf course to hit a ball around and get some exercise. I felt like I was doing poorly today, mis-hitting a lot of strokes, but I ended up scoring 60 (for 9 holes), which is only 3 worse than my best on that course, so I suppose that’s not too bad.

Back home I dedicated the day to doing some writing. I’m working on starting a series of tabletop roleplaying game supplements, which I hope to offer for sale through DriveThruRPG, to try and turn this time away from a job into some sort of income. I started jotting down ideas about bridges as significant structures in an adventure campaign, and I’ve got a few thousand words of stuff. I think I need a few more days of work to polish it up and format it, and then see about setting up a seller account.

So hopefully in the not too distant future you’ll start seeing RPG titles from me available. I have a whole bunch of other ideas for PDF gaming books as well. The ideas are actually the easy part – the hard part is spending the time to write them up as coherent and useful text!