Saturday is housecleaning day, and I did more than normal today, with a thorough vacuuming and dusting, which ate up most of the morning. Then I wrote up the results of the pendulum/gravity experiment I did with my primary school Science Club class a couple of weeks ago, in preparation for my next visit on Monday. I made slides to show the kids, and I also wrote it up over on 100 Proofs that the Earth is a Globe.

In the afternoon, my wife and I took Scully out for some exercise. We found a new park to try out, about 10 minutes drive away. We like going to different places, so Scully can explore. She had a good time running around the grass, meeting another dog there, and chasing a brushturkey and some ducks – I think they were Australian wood ducks.

At the park we saw an amazing cubby house that someone had in their back yard for the kids. The yard backed directly onto the park, with no fence, so we had a good view of it. 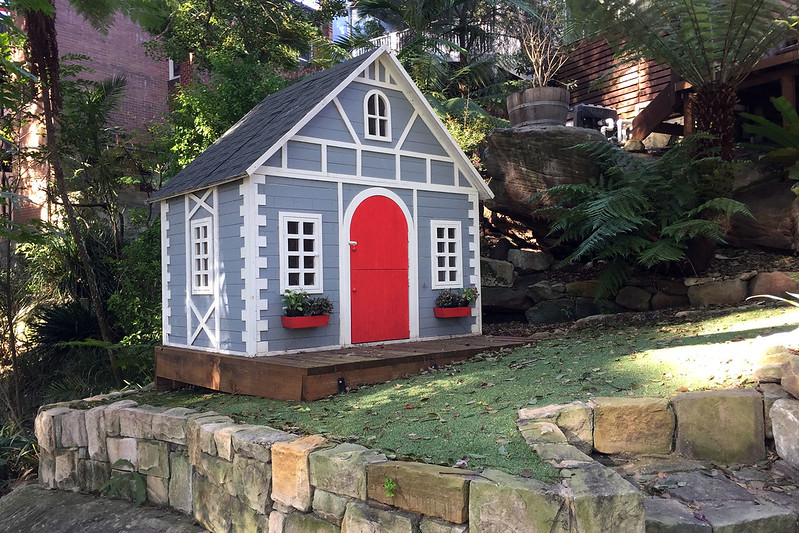 Monday! I spent much of today finishing off the build of the Lego Stranger Things set. It’s a big set and took several hours of building over the past couple of days to finish. I’ve only just finished it late this evening. I was planning to take a photo to show it off, but honestly I’m mentally exhausted and want to head to bed soon, so I’ll do it tomorrow.

I took a break at lunch time to walk up the street to get some fish & chips. I took them to my usual fish & chips eating spot, on a hill overlooking the harbour. It’s lovely eating outdoors with a view. But today a couple of magpies decided that they also liked the looks of my lunch, and came threateningly close – within striking distance to steal a chip or a chunk of fish if I wasn’t careful. At one point one tried to land right on my meal, and I barely managed to fend it off without letting it touch any of the food. And within a minute or so another two magpies arrived, looming ominously from the tree branches not far above me like something out of Hitchcock’s The Birds.

I didn’t fancy the sharp beaks on the birds and the fact that they looked keen to strike, so I packed up my lunch and walked to a different location to eat in peace. It’s a shame. I’ve had birds hover around me at that spot before, but never so aggressively or dangerously close. I fear that spot may be lost for good, because magpies are highly territorial and maintain their behaviour over several years.

Today I planned to photograph a batch of new Irregular Webcomic! strips that I’ve written over the past few days. But first thing this morning I had to visit the dentist for a routine hygiene/clean thingy. Alas, it turned out that I had a cracked tooth, which needed filling…

I ended up spending over two hours there, and left with a numb face. Arriving home a lot later than I thought and not feeling the best, I decided to give the photography a miss and leave it until Thursday. Instead I did some more prep for Friday night’s D&D game, and a bit of coding on a secret new random text generator, which promises to be a lot of fun.

Oh, and on the way home from the dentist, I got swooped by a magpie! It’s still the middle of winter, but it’s so warm and spring-like already that the magpies are apparently nesting already. It hit me full in the back of the shoulder and head as it dive-bombed me. I was rather shocked as I haven’t really been attacked by a magpie for several years – I’m usually pretty cautious when I know they’re nesting, but it never would have occurred to me that they’d be laying eggs so early in the year.

It really has been an amazingly warm winter here. There are still trees with autumn and even pre-autumn green foliage that hasn’t dropped, while other trees are sprouting new spring foliage already. And the magnolias are in full bloom:

Magnolias are in full bloom, with over a month of winter to go.