It was the last on-site tutorial for the university image processing course. I went into the city for an early dinner at a Thai place near the uni and had some pad Thai, before showing up for the tutorial at 6pm. There were only a dozen or so students on site at the university – the rest of the 200 or so in the class electing to work from home and collaborate with their teams online. I answered a few questions from some teams on MS Teams, but there wasn’t much to do, so the lecturer and other tutors had a bit of a chat while waiting for the on-site students. They had a few questions, but eventually departed, adn we could head home a bit early.

This is the last official tutorial for the course. The students submit their final report on Friday, and then a video presentation early next week, and I have to mark them. Then that’s it until next year, when I’ll likely be doing the data engineering course again in semester 1 and image processing again in semester 2.

The other ending was the last three Outschool classes on Monsters. I completed the survey of the kids on that crucial question: Is a mummy a type of zombie or a different thing? The results:

An exactly even split between the two answers I was hoping to disambiguate! And one kid went for the original answer of reversing the relationship.

I also have this screencap to share of how I appeared in Zoom while teaching this week’s lesson on monsters: 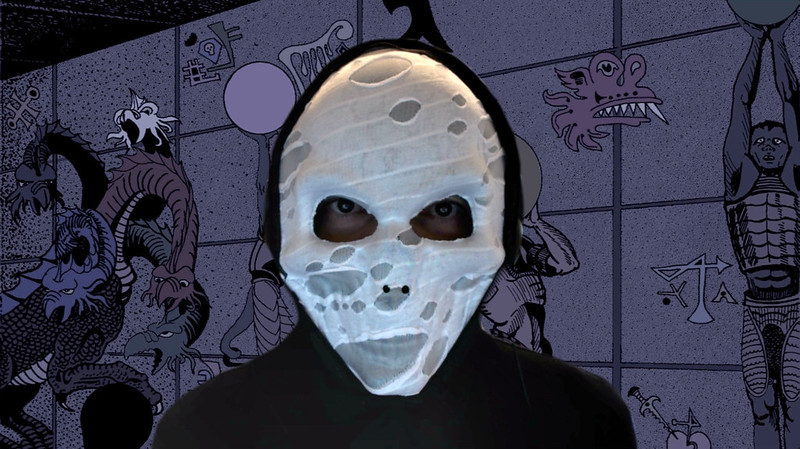 Some kids, when they arrived in the Zoom session, flinched back when they saw me! But nobody was too scared, and some of the kids thought it was hilarious. I didn’t actually keep the mask on for the whole lesson, as it was hot and a bit difficult to talk through the mask. In one case when I took it off, a couple of the kids said I was scarier without it! 🤣

The other thing of course is that today is Halloween. This never used to be a thing here in Australia. When I was a kid, Halloween was just “a thing Americans did” that had no impact whatsoever here. It started slowly taking off in Australia maybe around 2000, and now it’s fairly common for people to decorate their houses to indicate that they are willing to accept trick-or-treating kids. It hasn’t reached full penetration – around where I live, maybe only one in ten houses are decorated. But heading to the station to catch my train into town I saw a couple of kids dressed up, including a girl in a bright red witch outfit. And there were a handful of people I saw in the city dressed up in costumes.