We decided to go out today and try to find a god place to have some scones or lunch or whatever. The forecast was again gloomy, so I nixed my wife’s idea to walk into the city across the Harbour Bridge, as that’s over an hour’s walk each way and I didn’t feel like doing that in the rain.

I did some searching and found a place at a plant nursery further north, in more outer suburbs. It had a cafe which advertised as dog-friendly, and even had a doggie menu, with things like sausages, scrambled eggs, bacon, and puppuccinos. So we booked a table for an early lunch and drove out there.

We arrived early, so spent some time looking around at the plants and garden accessories, and the homewares stuff that was inside the building. We got a nice sheltered table. It was pretty much indoors, but the roof had open ventilation and the floor was exterior paving tiles, so I guess they could legally claim it was an outdoor space so they could have dogs present. There were a few other people with dogs there too, finishing up late Saturday breakfasts as we arrived at the turnover to lunch service.

I got a spicy burger with jalapeños and mustard, which was pretty decent, and a chocolate milkshake. Scully got a puppuccino – her first one ever! I guess she’s a grown-up dog now. It was basically some sort of frothed lactose-free milk, with some coloured sprinkles on top. 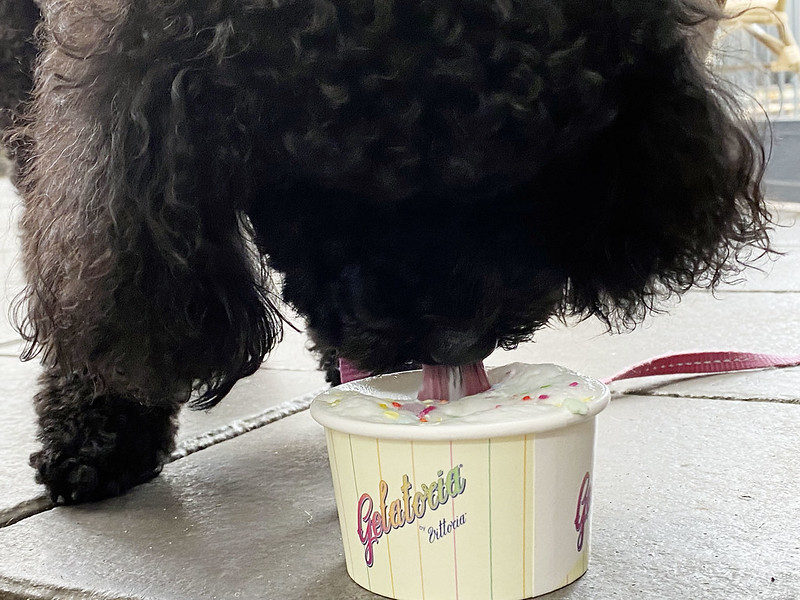 She really liked it! But being a little dog she could only finish about half of it.

This afternoon I spent more time working on slides for my photography engineering presentation. I had to wrestle with Matlab to produce a whole bunch of diagrams, which took some time to code and debug, but I’m pleased with the results. I think I’m more than halfway done now – at least I hope so, since I’ll have too many slides otherwise!

One thought on “Scully’s first puppuccino”