My wife and I were awake about 4 o’clock this morning, due to going to bed early and being partly jet lagged still. I searched online for a cafe or something open early for breakfast, but many places only open at 10 o’clock or thereabouts. There were only a few places at the main train station open that early. I found a place called Haferkater that made hot porridge, with various toppings. That looked good, so we went there and got some and took it to eat sitting on a bench in front of the vast Cologne Cathedral. It was chilly, so the hot food was good.

After eating, we went to see the Wochenmarkt farmers’ market in Apostelnkloster. This opened at 07:00, but we arrived a few minutes earlier while the stallholders were finishing their set up. It was a small market, with a couple of large fruit and vegetable stalls, a couple of flower stalls, a cheese truck, butcher’s truck, and seafood truck, and a baker with cakes and cinnamon rolls, plus a bread baker.

We stopped to look at the bread stall and the senior woman there began talking to us about their bread. She was very keen to tell us all about it, mentioning that they had sourdough starter over 100 years old, and most of their bread was made using rye flour. She asked if we’d like to try some bread and before we had a chance to answer she starting slicing a large loaf and spreading it with butter for us. She had us try the plain rye loaf, and one with walnuts in it, and then she cut a slice of a loaf with small bits of ham baked into it – she asked if we were vegetarian and offered it to me when I said that my wife was was. All the bread was really good.

She told us a story about how when grandmothers in Germany used to bake bread, they would hide it in a cupboard for a day and only let the family eat it the next day. She said that developed the flavour, but also it was because if they let the family eat it fresh out of the oven then the entire loaf would go in no time. She told us a bunch of other stories about the bread. They also had big trays of various slices with crumble toppings: apple, berries, and poppy seed. She grabbed some of there loose crumble topping and gave us a handful to try, then started cutting some of the poppy seed slice. Before she could offer us some of that to taste I said we’d like to buy a full slice of it. It was a large piece and cost only 2.20€. I asked if we could take some photos of the stall, and her and her junior assistant posed for a photo for us. And then she cut us two slices of their loaf with fruit in it – figs and other things – and put those in a bag to take with us as well! It was really good to have such a nice chat with a stall holder like that. 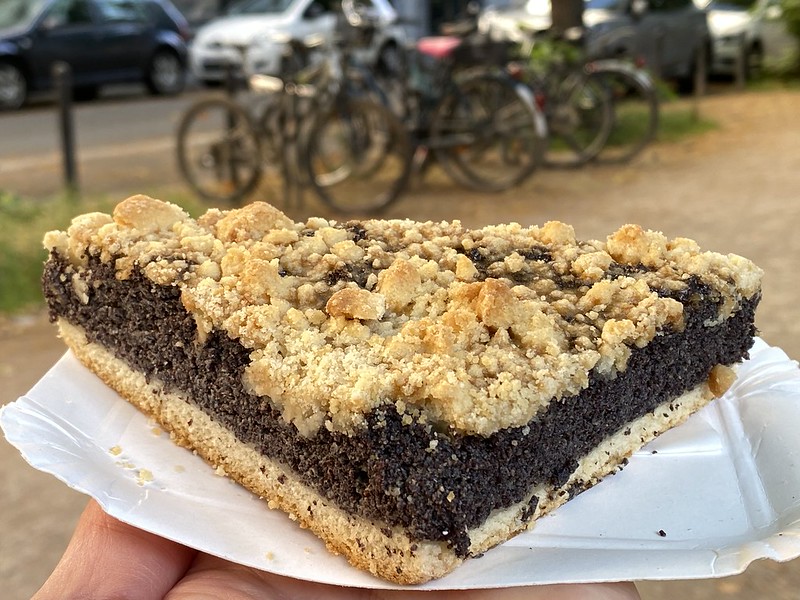 After the market we went for a long walk, around a couple of neighbourhoods that I’d found recommended as interesting places to see in Cologne. We went first to Rathenau, near the University of Cologne, a trendy student district. This wasn’t as interesting as I’d hoped, seeming like any random district. From there we walked north to the Belgian Quarter, which turned out to be much nicer and more interesting. It had some nice parks and a lot of quirky and curious shops. Unfortunately they were all still closed, since it was still early.

We walked back to the centre of town along a street with more shops. My wife marked the area to come back later today when I was in my meetings. We continued east all the way to the Rhine River, and walked back to our hotel along the water. Here’s the church Groß St Martin, behind a row of picturesque old buildings: 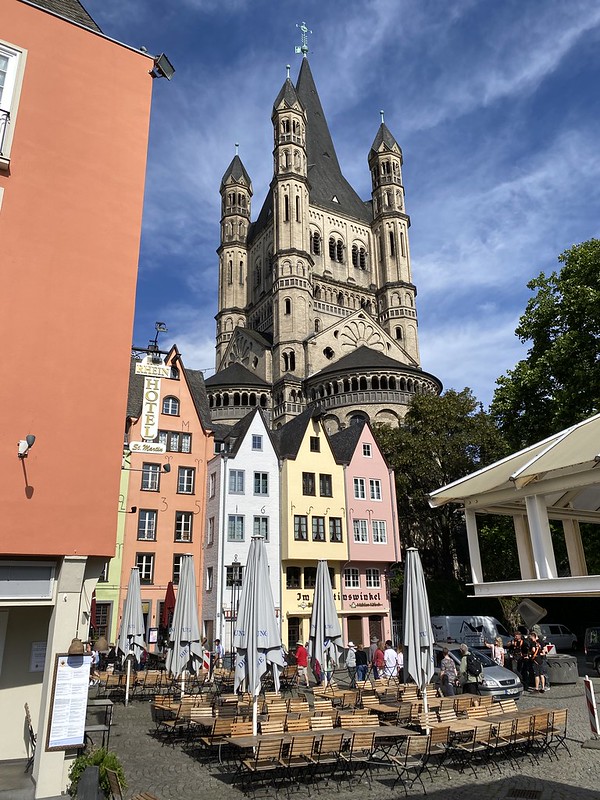 During our walks, I spotted some birds: plenty of feral pigeons, some common blackbirds, a couple of carrion crows, and a Eurasian magpie. I used eBird to record them, but realised I needed to download a European bird pack to get it and Merlin Bird ID to work properly. Not being familiar with European birds, I had to spend some time later confirming the identifications of the blackbirds and magpie. I’m not sure I’ve ever seen (or at least consciously noticed) a Eurasian magpie before – I didn’t expect it to have such a long tail!

Back at our hotel room I picked up my gear and went off to my meeting, leaving my wife to explore by herself for the afternoon. I caught a train to my meeting. Lunch today was chicken gyros with rice. Technical discussions were on: A new proposal to start work on technical stability of camera support systems (such as tripod mounts); image stabilisation; and a new high dynamic range and wide colour gamut image format.

After the meeting today, we had a group dinner with all of the delegates from the meeting. My wife was also invited to come along. We went to the Biergarten am Aachener Weiher. We took a U-Bahn train from Breslauerplatz to Neumarkt, and then a tram from there to Moltkestraße, which was a short walk from the beer garden. All the others were there already. We had a good time chatting with the other delegates and eating food and drinking beer. I had a Wienerschnitzel, which was okay, but nothing special.

After dinner we left as the gathering broke up. We walked all the way back to the hotel as the sun slowly went down. It provided perfect twilight for photographing the cathedral and the Hauptbahnhof, so I snapped a few photos with my phone. 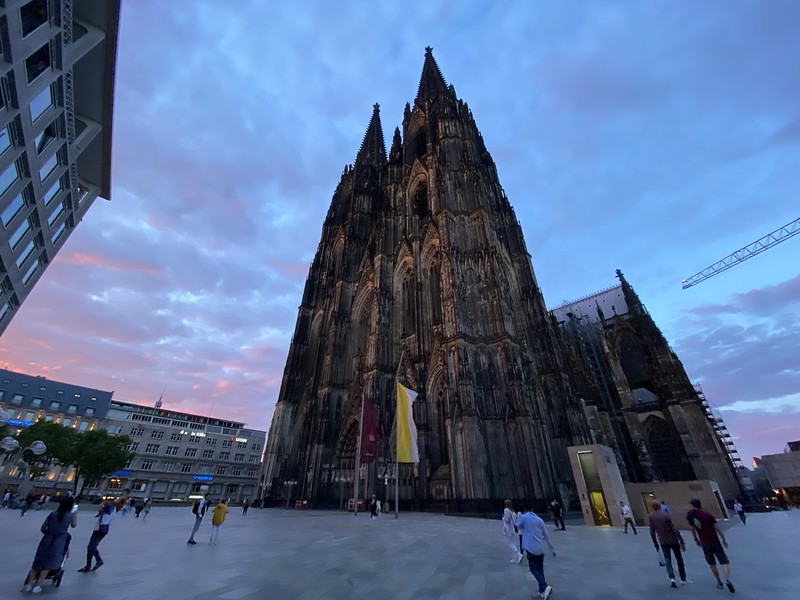 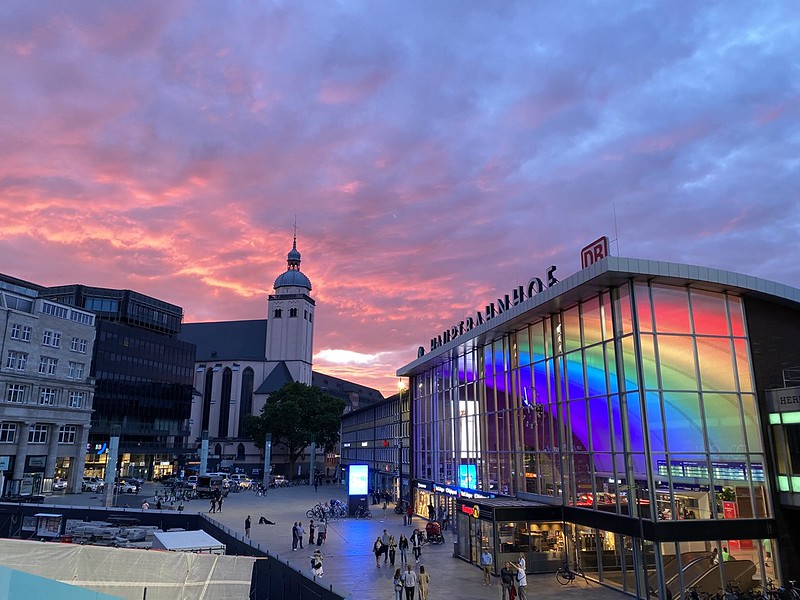 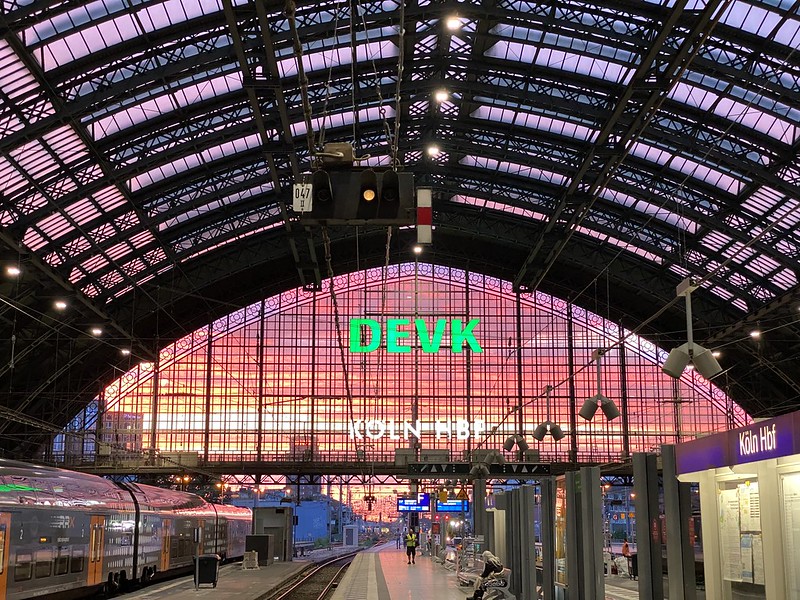