It’s Monday, the first day of the ISO Photography Standards meeting that I’m here to attend. We still have several delegates unable to travel due to COVID, so we’re doing a hybrid online meeting, with roughly half the people attending via Webex (a virtual meeting app like Zoom). So rather than the usual 3 days of 9-5 meetings that we do for a regular face-to-face meeting, we’re restricting the hours each day for the sake of people in middle-of-the-night time zones, and doing 5 days of meetings from 12:15 to 17:00. And from the discussion today it seems we’ll be staying in this agenda format for at least a few more meetings, until most people can attend fave-to-face again.

We began the morning waking up early in our room in Würzburg. It was difficult to sleep because of how hot it was and the fact that the room had no air conditioning. I had an icy cold shower last thing before getting into bed, which helped and I got some sleep, but woke up in the middle of the night hot and sweaty. I opened the windows wide to let in cooler air, which helped a lot until the sun started brightening the room around 5am.

We got up at 6am, half an hour before we’d set the alarm. This gave us time to have showers and pack our bags before leaving the hotel early and finding some breakfast before catching our train at 7:32. We found a cafe/bakery and had some croissants, then bought some bottles of water and an apple for the train.

The train delivered us to Cologne a bit after 10:30 and we checked into our hotel, which is very close to the station. Our room was available already, so that was good. We dropped our bags and left straight away, because I had to catch another train to Horrem, where my meetings are. My wife said goodbye and went to explore Cologne by herself until I return this evening.

The first day of meetings went smoothly. It was good to see some of the familiar faces in person again after nearly 3 years of Zoom meetings. We had a dozen or so delegates present in the room, plus a similar number attending virtually. The host provided free lunch – today was choice of soba noodles with salad and a spicy peanut sauce, or some pasta which looked like lasagne, but I didn’t get a close look as I chose the noodles.

We finished almost an hour early for the day. I went back to the hotel and met my wife there, after she’d spent the afternoon getting reacquainted with the city centre. We walked north to the Ebertplatz area to get dinner at a restaurant called Feuer & Flamme (Fire & Flame). They specialised in flammkuchen and had a big selection of vegetarian options. 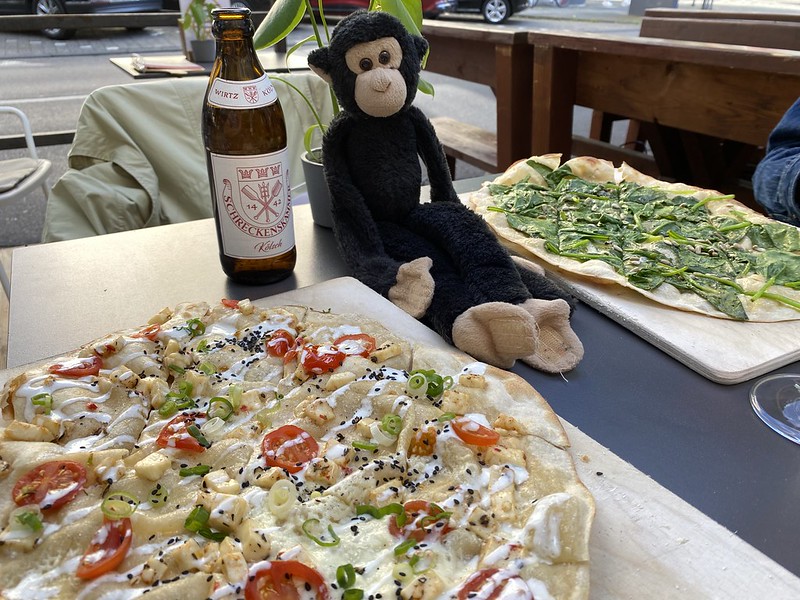 And after sharing a couple of delicious flammkuche we decided to try one of the sweet dessert ones: 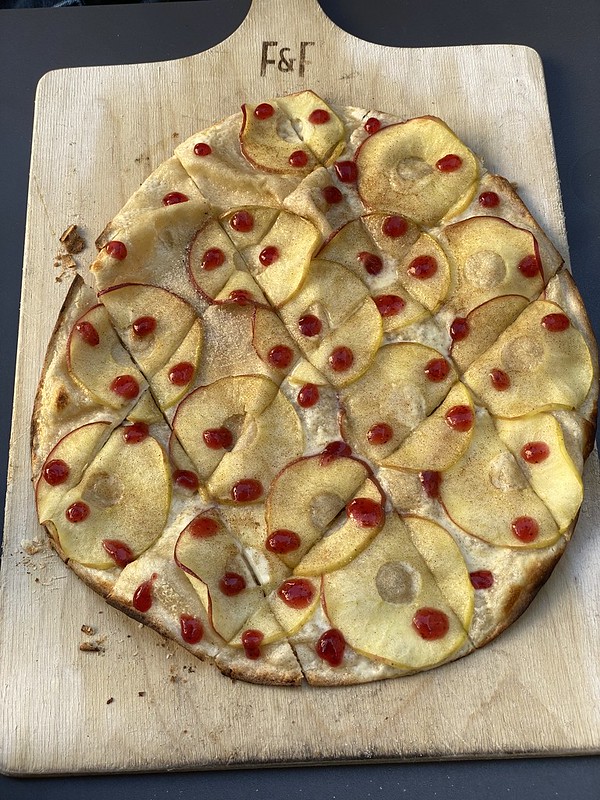 Overall it was really good!

We’re both still pretty tired after the day, and adjusting to the time zone, so we’ll get another early night.