We’re still in Changi Airport in Singapore. We found some seats in the Singapore Airlines lounge, which was very crowded when we arrived. But as the evening wore on past midnight the lucky people slowly dispersed to their flights, leaving us behind. We moved to a quiet corner where there was a sofa. They had blankets, and other people were sleeping on other sofas, so we figured they allowed this. My wife took the sofa, but there was only one available, so I made do on an adjacent armchair. I closed my eyes and struggled to try and sleep but couldn’t really get any sleep.

My wife woke up at about 05:00 (being what would be a normal rising time of 7am back in Sydney). She went to get some breakfast from the lounge food area. When she came back she said she’d checked her email and there was a message from Lufthansa that our flight had been delayed further, with departure pushed back from 08:40 to 22:40 – a delay of another 14 hours! This made the total delay now 23 hours.

I had some muesli for breakfast too, and then we took stock to decide what to do. The new arrival time in Frankfurt would be 06:00 on Sunday. I’d found through some searching a couple of places in Würzburg that are open for COVID testing on Sundays. So we figure we can still get to our hotel, check in early on Sunday (around 09:00 maybe by the time we get the train from Frankfurt), go and get a rapid COVID test, then head to the nursing home to see my aunt. They don’t want us to arrive between 11:30 and 14:30, because that’s lunch time and often when the residents take a nap. Our plan had been to pick her up before 11:30 to go out for lunch together, but I don’t think we’ll be able to make that any more. So I emailed the nursing home to tell them we were delayed and would probably arrive after 14:30 on Sunday. I’m really hoping there are no further complications which mean that we end up not being able to see her. She’s living in Germany all alone with no family and was probably really looking forward to seeing us.

I also emailed our hotel to say we’d be arriving a day late, but that we want to keep the full booking so we can check in and use the room when we arrive early in the morning.

This done, we decided to see if we could get Lufthansa or Singapore Airlines to get us a hotel room for the day, so we could shower and try to sleep a bit. We spoke to the Singapore staff at the transit counter, but they said that they couldn’t do anything for us because, even though our flight was booked through Singapore as a codeshare, the flight is operated by Lufthansa, so they bear all the responsibility for any delays. So we asked where we could speak to someone from Lufthansa. They called the other transit desk (that we’d seen last night where everyone was waiting to see the Lufthansa staff) and then told us that there was currently nobody from Lufthansa there, and nobody would be arriving until 19:30! Presumably because they don’t normally operate flights out of Singapore except late in the evening.

We asked if there was any hotel we could stay in at our own expense. The Singapore Airlines woman mentioned the transit hotel that we’d tried unsuccessfully last night. She called them, and they told her they had rooms available from 10:00. So we walked over there again and put our names on a waiting list for rooms. They hire rooms out in blocks of 6 hours, so we figured a 12 hour block would give us 10:00 to 22:00, just before our flight is currently scheduled to leave. It was very expensive, about AU$430 for 12 hours. But we checked our travel insurance policy online and we’re pretty sure it covers unexpected expenses due to delays. My wife also suggested we should first try to claim the money back from Lufthansa as well.

They told us to come back around 09:45. We left and went back to the lounge to sit for a bit. We had some water, but it was busy and noisy, so we decided to go back to the hotel and sit there in the reception area because it was quieter. It was lucky we did, because a room became available from 09:00, and they even let us in before that time. We went in, had showers to freshen up, and then tried to get some sleep. My wife managed to sleep, but I was just lying awake unable to fall asleep for 2.5 hours, despite being so tired, probably since it’s daytime in Sydney and my body thinks it should be awake.

We went out and got some lunch and came back for another unsuccessful attempt to sleep. But at least we’re in a private room and able to lie down on a bed, rather than hunched up on a chair in the public area of the terminal.

Our flight has just shown up on the departure board, and it looks like there are no further delays at this point. We may get to leave Changi Airport after spending 26 hours here…

Oh, one nice thing is we had plenty of time to visit the famous butterfly garden here in the airport terminal. 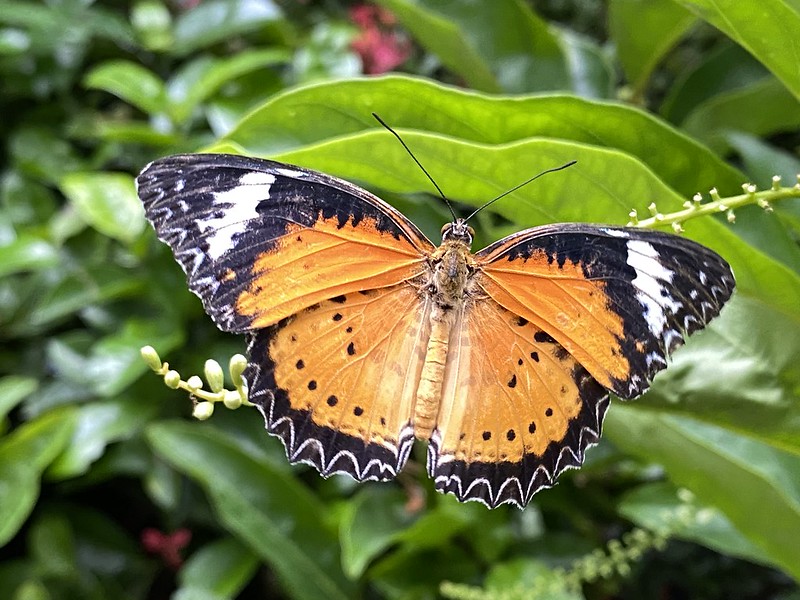