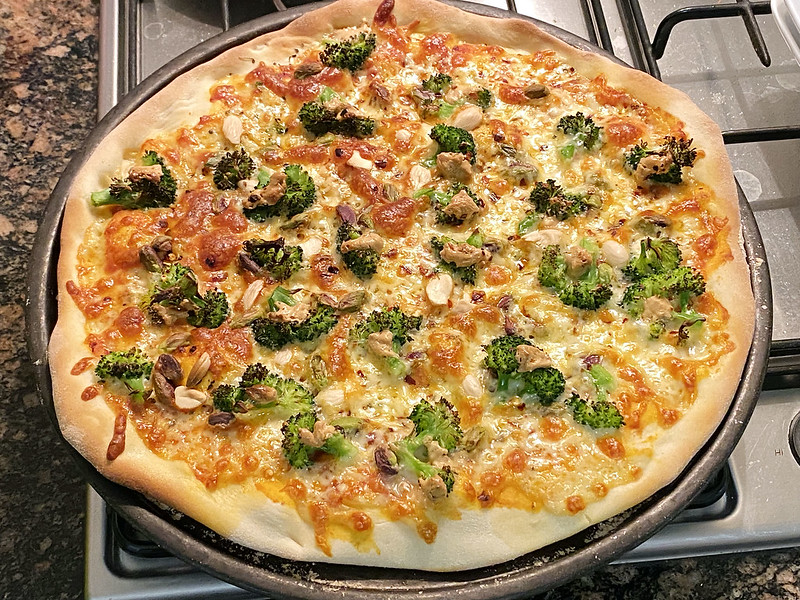 A few weeks ago I had the satay chicken pizza from the menu at our local pizza place. Tonight when thinking about what to cook, I realised we had no pumpkin, my usual go-to pizza topping. But we had broccoli, and what better to go with broccoli than satay sauce? But I didn’t have any satay sauce… so peanut butter and chilli flakes to the rescue! I added some pistachios and almonds as well for crunch I would have used cashews, but we ran out of those on the weekend and I have to buy some more.

Anyway, it turned out really good! There’s not a lot of peanut butter on there – just enough to give it a peanutty taste. The sauce under the cheese is traditional tomato paste, although I spread it a bit more thinly today.

The weather continues to be rainy. Today marked the 14th day in a row of rain. We can barely remember what it’s like to have a day where it doesn’t rain.

And in what I hope is not a consequence of the war in Ukraine, Outschool did its weekly credit card payment processing of class fees, and informed me by e-mail that a payment for one of my students could not be processed. A student who lives in Russia. Occasionally I’ve received these processing error notifications, but there’s no follow-up and the kid shows up in class as usual, so presumably the parent did something and the payment went through. But this time, a few hours later I received a second e-mail saying that the payment had failed to be processed again. I’ve never received a second message like this before. It makes me wonder if the parent tried to pay again, and was denied again. I’m hoping this is not being caused by the financial sanctions being taken against Russia, and that this student won’t have to miss my classes because of this war.