This morning I got up and took Scully out, then had breakfast, and then went for my run. I tried to get it in early before the rain closed in, because the forecast was for a lot of rain today. I managed to get that done. The sky was dark and thundery for several hours before the rain finally arrived around lunch time.

Then the rain pounded down most of the afternoon, very heavy at times with loud rumbles of thunder, interspersed with medium rain. It’s still quite heavy now, late in the evening.

From 2pm I had the ISO Photography standards meeting, held online. One of the first agenda items was to move the first technical session from late today to early Thursday, so we ended up doing only administrative things today.

Before the ISO meeting started, I had to complete work on the new ethics class for this week, since I’ve now moved classed from Thursday evenings to Tuesdays, to give me time to attend the university for the Data Engineering course on Thursdays. But this means I have a day less in between to write up the new topic (I was often doing it on Wednesday mornings). And since the first ethics class was hard up against the end of the ISO meeting, I had to get it completed before 2pm. (Although as it turned out I had a spare hour because of the agenda change, but I didn’t know that in advance.)

For dinner I made pizza, and topped it with pumpkin and some of the bunya nuts that we’re working our way through. 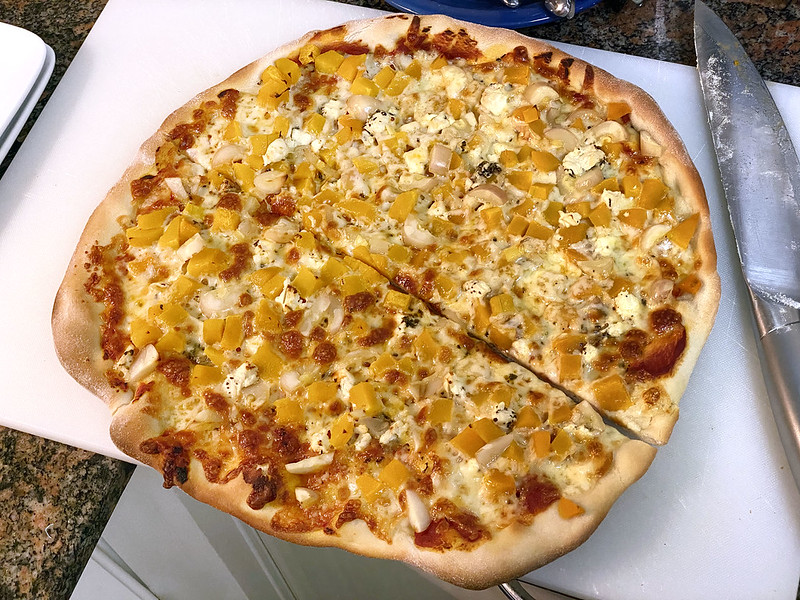 They’re not crunchy like walnuts, which is what I usually use, but added a nice subtle flavour and a different texture.

And finally, in about 10 minutes, I have the second ethics class of the evening. The topic is genetic engineering, which I think will be a good one. The first class went well, and I think the kids enjoyed it a bit more than the patriotism topic.