Tuesdays are the days when I don’t have any classes on Outschool to teach, so they’re good days for me to go do other things. My golf friend suggested we go play at the pitch and putt course this morning. I got up early (6:30) and went straight out for my run, to get it out of the way before heading off to play golf. It was nice and cool that early, but my muscles obviously hadn’t warmed up after a night asleep and I didn’t do a very good time.

After breakfast, I headed out to the golf course. It was an overcast day, and rained a little as I drove there, but the rain held off for the rest of the day. 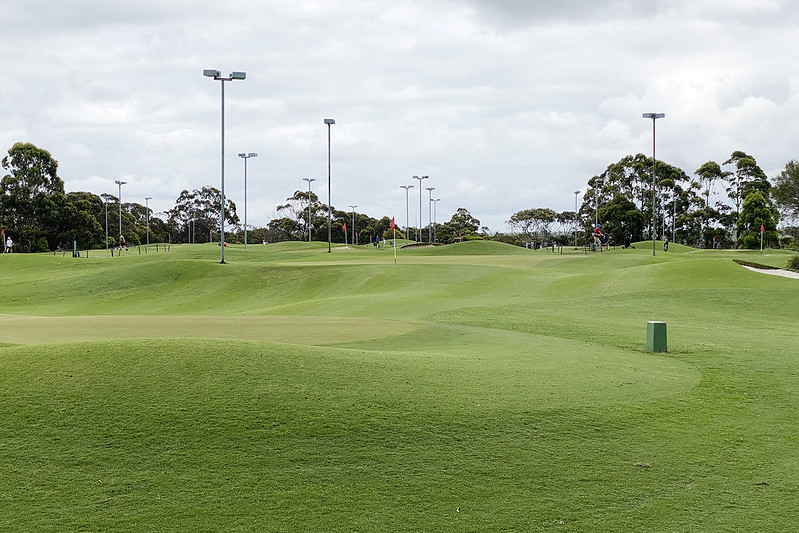 I scored 75, which was okay, but not as good as my best 71 on this course last time. Afterwards I went to the driving range next door to hit a bucket of balls. I started with a 9 iron and I was hitting the ball to the 100 metre marker, which I’m pretty happy with. I’m still finding my strength with full swings. I don’t think I’ve ever hit a 9 iron that far on an actual course. Then I switched to the driver and practised that for a while. It was a bit more erratic, but more consistent than I’ve been before, and I hit a few into the netting which is at 180 metres, but most didn’t quite reach that far.

After that I drove over to the pie shop at Collaroy for lunch. I sat and ate on a bench looking out over the beach. It’s usually a nice view, but was a bit grey with the overcast, and the surf was a bit brown with all the recent rain.

Later in the afternoon I relaxed a bit at home. For dinner I made pizza with mixed mushrooms. I decided to try hand stretching the dough to make the base instead of rolling it out, to see what difference that would make. And it turned out amazing! The rolled bases are very even, but hand stretching it made it thinner in the middle and puffier around the crust. So the centre cooked thin and crispy, and bubbled up like a proper pizzeria pizza. The difference was amazing, and my wife agreed it was much better than the rolled versions we’ve been having. So I guess from now on I’ll be hand stretching our pizza bases.