Getting things out of the way early, I did my 2.5k run first thing this morning. On the way out, I noticed one of my neighbours setting up a picnic in the park across the street. When I’d finished my run and returned home, he was all set up, and minding the site until his family arrived. I asked if I could take a photo to show people what an Aussie Christmas morning looks like: 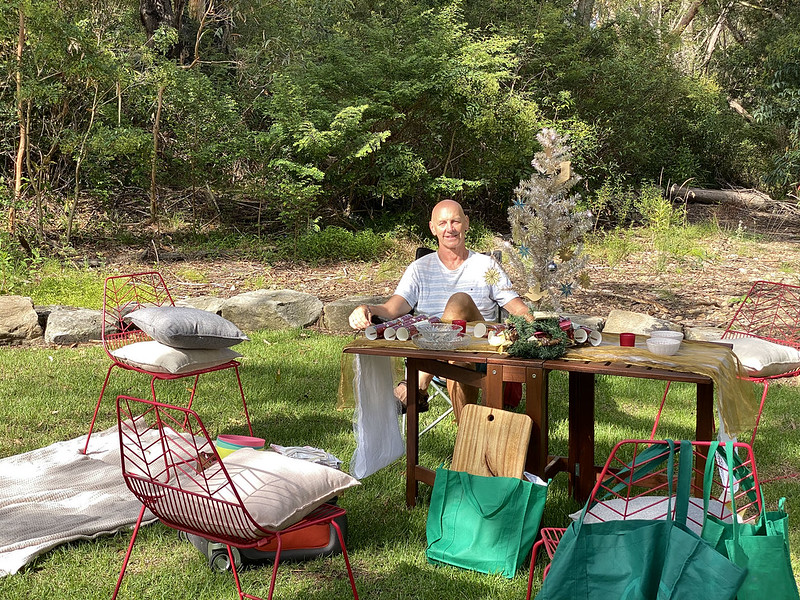 It was already warm, and best to stay in the shade. He said they were going to do brunch, and pack up by midday, to avoid the heat of the middle of the day.

After completing my run and stretching exercises, my wife wanted to take Scully out for a walk before we packed up and headed to her mother’s place for Christmas lunch. We took Scully down to the waterside park near us, and back. Then because we’d gotten all hot and sweaty walking, we had showers, before packing the car and driving over to my mother-in-law’s place.

Christmas lunch was a traditional roast turkey and vegetables, sliced ham, and also the lentil nut loaf that I’d cooked yesterday, with my home made tomato relish. And for afters we had two desserts: a chocolate hazelnut pavlova (from La Pav), and a Christmas pudding, with choice of ice cream and/or cream. Most of us had a piece of both. And then we retired to the sofas and people had coffee, served with Christmas fruitcake and chocolates.

Yeah, I’m still pretty full, and won’t need to eat any dinner tonight! We also have a lot of leftovers. And of course gift goodies. Mostly we got food stuff – nice treats to eat and actually use, rather than gifts that nobody is sure if anyone else really wants.

Scully got a bag of goodies too, including some new dog toys, some yummy treats, and… an art set from Picasso Paws! This is a kit with a couple of small canvases, tubes of paint, and ziplock bags that you seal the canvas and paint inside. You smear peanut butter or whatever on the outside of the bag and your dog licks it smearing the paint all over the canvas, to create a cool artwork. We’ll try it some time over the next few days and I’ll show you the results.

After a few hours of lounging around, digesting in the afternoon heat, we headed home. Actually it wasn’t too hot today, only 29°C. I’ve had a lot of much hotter Christmas Days in the past. The weather is actually supposed to turn tonight and be cooler and rainy for the next few days.

One thought on “A busier Christmas Day”