I didn’t have time to do an entry yesterday as it was board games night with my friends and I was out all evening. I did my run and exercises in the morning and some Darths & Droids work.

In the afternoon I worked on making some tutorial exercises for students in the university data engineering course. I wanted to make some fairly simple exercises involving calculating means and medians and standard deviations and such stuff from a dataset. I found several sites with free datasets that could be used, and went through them looking for something interesting. The first I found was a Kaggle dataset on avocado prices. That seemed okay, but then I found a cool site with other datasets, including one that was almost 2000 different people’s guesses as to the weight of a cow in a guessing competition. That looked amusing, and it has some interesting statistical properties. And then I found another site which has a set of data about the passengers on the Titanic, including nationality, sex, cabin class, fare paid, and whether they survived the sinking or not. I think this could be really interesting as you can ask questions like the average fare paid by survivors compared to the average fare paid by people who died. I still have some work to do to analyse this myself and turn it into student exercises, but I think this is a good start.

Games night was face-to-face, but we only had four participants. The first game we played was Hadrian’s Wall. 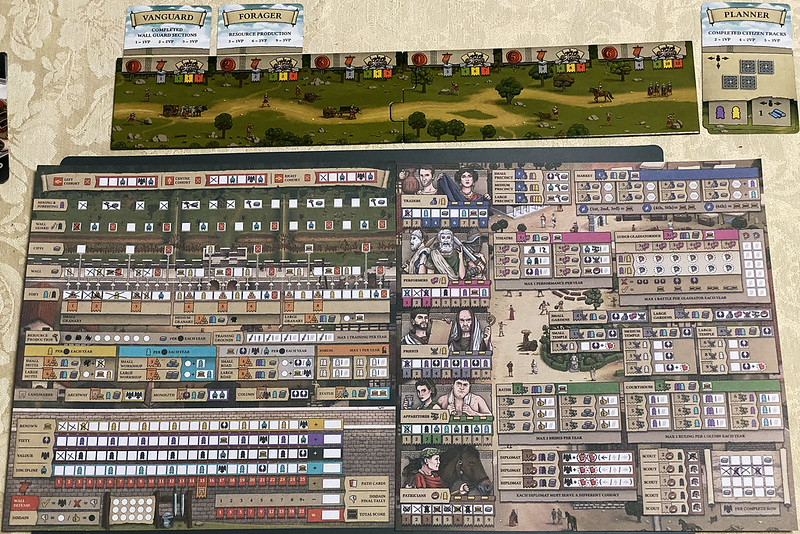 In this game each player is a Roman commander in charge of an outpost on Hadrian’s Wall. You get a bunch of meeples representing different types of people, and “resources”, and you spend these things to develop your outpost. The game is played by marking checkboxes on a pair of playsheets – each time you pay the cost for something in meeples and/or resources, you mark it off on your sheets. Marking off certain boxes grants you more meeples or resources, or alternatively points which are scored along four tracks: renown, piety, valour, and discipline. There are a lot of interactions and much of the game is optimising your spends to cascade into more meeples and resources that you can then spend to get more stuff. There’s a lot going on and many many options.

I kind of enjoyed it and would play it again once or twice, but I feel like it wouldn’t hold my interest after a few more games. It’s a very solitaire-like play experience – there was virtually zero interaction between the four players, and we spent most of our times heads down examining our own scoresheets to try to optimise our turns, so it felt a bit antisocial as well. I ended up “winning”, with 80 points to the second player on 77, but I made a mistake at one point and did a few spends on things that I shouldn’t have had access to until I’d developed something else – it’s a very easy mistake to make on your first game.

The host’s wife arrived back home while we were playing, and asked us what we were playing and if it was fun. Another player said, “It’s a bit like we’re all working on spreadsheets, and yes, it’s fun.” I agree with that assessment – it felt a lot like optimising a mathematics problem, and it was kind of fun, but for me I think it would wear thin within another few games.

The second game we played was 18 Holes, a golf simulation. 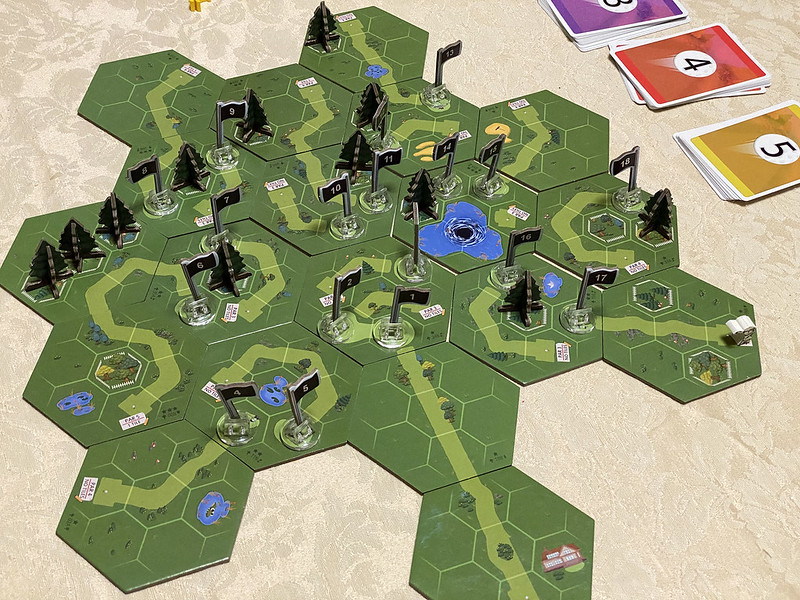 I think this game could have been good, however we got kind of messed up during the set-up. The owner suggested playing the “chaos golf” variant, and we set up the board for that. But then when he described how to play it – everyone just aims at any hole they like and we all go around the course in whatever individual directions we want to try and complete unscored holes before other players – another player said that sounded silly and can’t we just play a normal round of golf? So we did that, but we kind of had half the chaos golf rules and set-up still, and honestly it got a bit tired and repetitive, and it became clear that because of the “chaos golf” club sets that were handed out, certain players had significant advantages over other players. So it was rather unsatisfying. I feel like if we’d played one or the other version according to the rulebook it would have been fine, but we ended up in a weird non-rules-legal hybrid that didn’t play well. I’d try this again, but I’d want to play it strictly by the book next time.

I got home late, so didn’t write this up until just now. Today we had a long drive out to another suburb because my wife had an appointment there, so we went together, and I took Scully for a walk at the nearby wetlands park while we waited for her. This is a nice place for a walk as there are plenty of birds, including many species that I don’t get to see around where I live.

We got home and relaxed for the afternoon. The day has been hot – it really feels like summer finally. We had 31°C in the city, up to 29°C in some suburbs (the city is always cooler as it’s on the water).

This evening we went out to a nice seafood restaurant for dinner. It’s one of our favourites, but a little expensive so we don’t go as often as we’d like to. It’s very nice sitting outside, in warm evening air, with light still in the sky and a cool breeze to soften the heat a bit, and have some really well prepared seafood.