Today I had an appointment at the dentist for a regular clean and checkup. Except it was over 6 months overdue, because dentists weren’t doing anything but emergency work during Sydney’s COVID lockdowns, so it was impossible to get a routine appointment.

The hygienist was very pleased with my teeth and gums, which was good news after so long. It’s the second time I’ve seen this hygienist, who is relatively new at the practise, and I’m really happy with the way she works. The previous one was nice enough, but very heavy handed with the probing tool and it always hurt my gums a lot more.

This morning I shook the cobwebs off with a run. I wanted to get a 5k run under my belt after the past two weeks of building up the distance again with 2.5 and then 3.2. Knowing the 5k route that I’ve been doing earlier this year is rather hilly, I decided to go up to the sports oval near the hospital and just do laps. It’s more boring and less scenic, but it’s flat, and so easier to complete the distance without feeling like you’re dying on the uphill bits. I was hoping to complete the 5k in under 30 minutes, but ended up clocking 30:16. Hopefully I can get times under 30 minutes again by next week.

In between all this and picking up Scully from my wife’s work, then dropping her back during my dentist appointment, and picking her up again on the way home, I wrote some comics and helped some more university students with their image processing final projects. I also had a Zoom call with several family members, including my elderly aunt in Germany. And I made calzones for dinner. Phew!

And took this photo looking under the railway bridge near my place. The jacaranda trees are beautifully in bloom, right on cue for November. 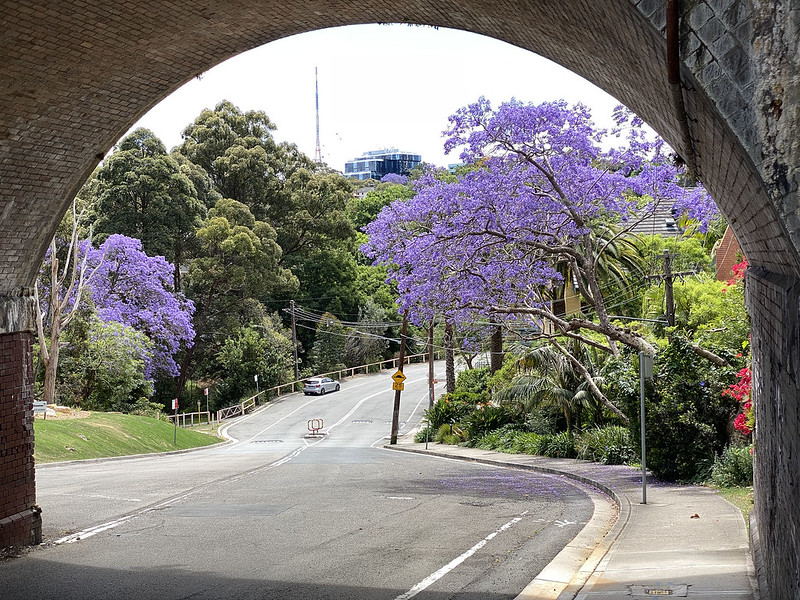 One thought on “Dental Tuesday”