Dawn broke on what is going to be a very busy week for me. First up today was teaching the last class of the “Disgust” topic in my online ethics classes. After that I took Scully out for a walk, and dropped by the post office to pick up some prepaid envelopes and stamps for my wife to use for sending orders of her dog bandanas out. I stopped off on the way back to grab some sushi rolls for lunch.

Back home I had to hustle to put together the rules and game pieces for the board game that the kids and I had designed together in the Creative Thinking class that I taught last night. The class ended with a rough outline of how the game works, which I had to whip into a playable shape, document, and then create a board and a bunch of game components that the kids can print out and playtest before next Sunday’s class. I mentioned before that the theme we’d come up with was ruining someone’s wedding. Here’s the first draft of the game board: 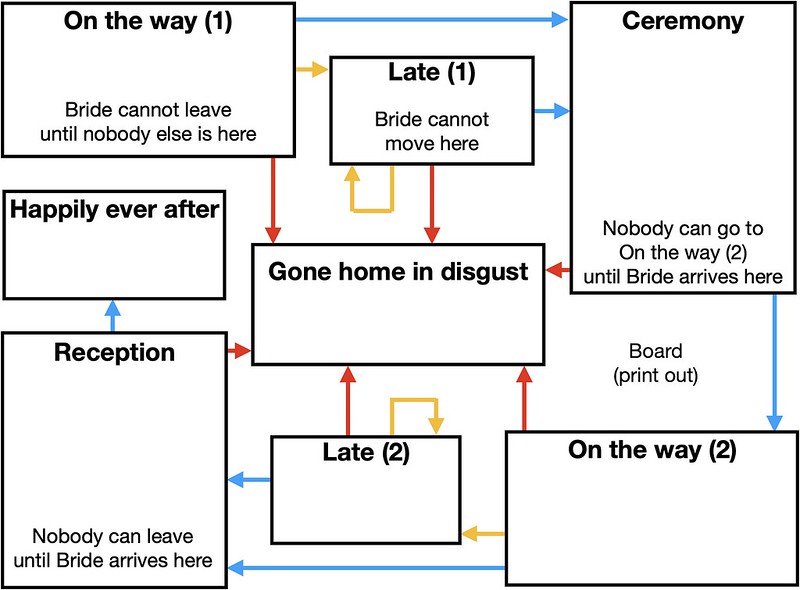 The idea is that the bride, groom, and various other people all have to move around following the blue arrows – hopefully to end on “happily ever after”. At least that’s their goal. The goal of the players in the game is to make the people upset, ruin the wedding, and make as many people as possible go home in disgust. Each turn, one wedding participant moves along a blue arrow, while the players try to do things to upset them or delay them (using a hand of cards). I came up with a clever way to encapsulate the idea that “a bride is never late to her wedding” – as you can see on the board, she can’t arrive at the ceremony until everyone else is either there, or running late. If she arrives and some guests are still late, then they miss the ceremony (and get upset and go home). And nobody can leave the ceremony to head to the reception until after the bride arrives and the ceremony happens.

There’s a bit more to it than that, but you get the general idea. After we do a few iterations and refine the gameplay, I’ll share the final result.

I had to get the game draft ready and uploaded to my class before 6pm, as this evening I had a tutorial session, helping university students with their image processing projects in the course I’m tutoring. That just finished.

The rest of the week is going to be even busier, as I have an online meeting for ISO Photography standards from 7-11am, every day from Tuesday to Saturday. So my mornings are accounted for. Tomorrow afternoon I need to prepare a science lesson for a kid that evening, and Wednesday I need to prepare my ethics class for the next week (on Democracy). And somehow I need to make another week’s worth of comics for my webcomic sites during this week too. Oh, and I also have to squeeze in time to mark the first project assignment for the university image processing course, which was submitted last Friday. It’s going to be exhausting, and I’m going to need the weekend to recover. Or possibly catch up…