Tonight I ran the third lesson of my 6-week course in Creative Thinking and Game Design. If you recall last week we had some intriguing suggested themes for the game that we’re working on. I’m happy to say that after going through and rating all of the theme ideas, we came up with three ideas that we all agreed were good for a game:

And by consensus we agreed that the one we liked best was the last one: ruining someone’s wedding. So that’s what we’re now officially doing – designing a board game about ruining a wedding! We also came up with the goal of the game – how you win: By making as many people as possible upset. And we listed some tentative game mechanics – we might use a board to represent the wedding venue (although I’m not convinced we need to do this); and we might have cards with various objects that will make people upset, for example an embarrassing photo of the bride. (We’ll keep it clean and G-rated! So let’s say no more about that.)

The kids have homework to play with mechanics and come up with any new ideas during the week. Next lesson we’ll put them together into a game that we can start playing!

Other than that, today I worked on the current batch of Irregular Webcomic! strips, assembling them from the photos I took a couple of weeks ago. I’ve now completed that batch, so I can start thinking about writing the next batch…. it never ends.

I also did some baking today. I made sourdough bread, and because my wife is keen on fruit and nut loaf I made one of those, with dried apricots and walnut chunks in it. And I made some chocolate chip cookies, which I’ve been craving for weeks. I finally got around to buying some choc chips in the last grocery shop, so today I made a batch. I dotted two baking trays with dough and put them in the oven, heated to 180°C, and set the oven timer for a couple of minutes less than the minimum baking time specified in the recipe.

When the timer went off, I opened the oven to check the cookies… and black smoke poured out! I didn’t know what had happened until I noticed the oven mode selector knob wasn’t pointing at “Bake”, but rather at the adjacent setting, “Pizza”. I know I set it to “Bake” and the temperature to 180°C, but I must have bumped the knob when putting the baking trays in or something, and when the knob is turned to “Pizza” it also automatically resets the temperature to 220°C! The “Pizza” setting also applies base heat, to crisp the bottom of the pizza dough and uses the fan to force hot air throughout the oven. So the cookies were WAY overdone. 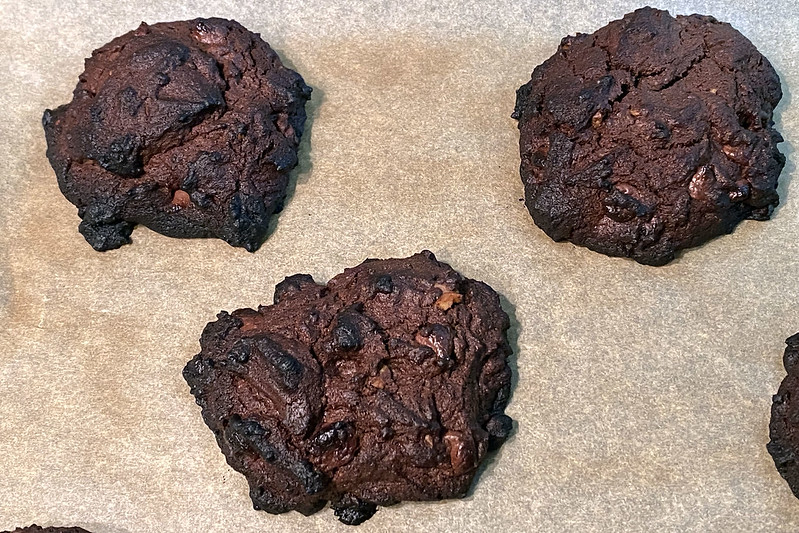 The ones on the bottom baking tray were basically charcoal on the lower half, and unsalvageable. The upper baking tray fared a little better – they are a bit well done, but just edible. I normally like them a bit gooey in the middle, but these are baked hard through.

It hasn’t been a good week for me in the kitchen.