I live near a small park, where I take Scully to toilet and to play in the grass a bit, nearly every day. The local council posted notices several months ago that they were planning landscaping work in the park. A couple of weeks ago they fenced off part of the park to start work. The park is on a slope, and Scully likes to lie on the top of the small hill so she has a good view of the surrounding area. The place she likes to lie is just outside the fenced off area, so I assumed it was fine for us to be there.

Then about a week ago the grass started going brown. Subtly at first, but then very noticeably, over a few days. Yesterday it was very clear that the grass was dying. Which was very weird, because there was a pretty stark line between the dying grass outside the fenced off area, and the still green grass inside the fence. 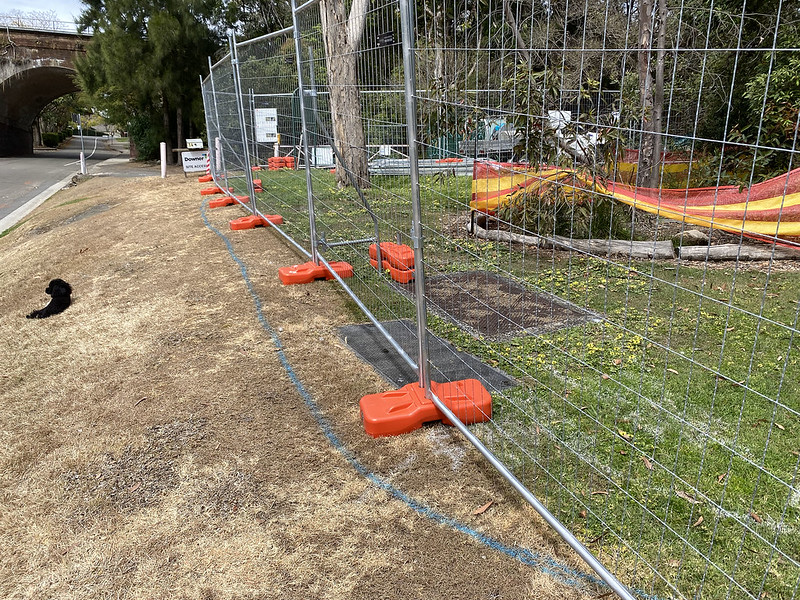 I started wondering if the grass had been sprayed with herbicide, as I couldn’t think of any other reason why it would suddenly die like this. I found the contact details of the local council project manager on the information sign posted on the temporary fencing, and phoned her up. I said I was a local resident, and I noticed the grass was dying in the area next to the fenced off works area, and asked if herbicide had been applied. She confirmed that the area had been sprayed with a glyphosate-based herbicide.

I pointed out that the area sprayed was outside the fenced off works area, and that people and dogs walked across the area every day, and that no notice of any sort was given that herbicide would be used on the area, nor any sort of warning that people might want to stay off the grass.

Then I realised that about a week ago Scully had been sick for two days, vomiting, and avoiding food. That would have been around when they must have sprayed that grass. I’m no expert – I don’t know if glyphosate can cause that in dogs, but it’s a little worrying. So I’m a bit upset about this.

To add to the stupidity, the project manager told me that the slope had been sprayed to kill the grass in preparation for removal and relandscaping the slope with sandstone and concrete, but they’d since decided they weren’t going to do that, and it will now be left the way it was! So they actually killed all that grass for no reason! Ugh.

In other news, today was very warm. We recorded 29.3°C, the warmest day since 13 March. It’s definitely an early, hot spring. We’re supposed to get similar temperatures tomorrow. My wife and I took Scully for a long walk early, before the heat of the day. There were a lot of people out and about, walking around, enjoying the warm weather. We’re wondering if this is a harbinger of a very hot summer coming up.

One thought on “Killing grass”