Health first. NSW recorded another 344 new COVID cases in the previous 24 hours. Less than yesterday but not by much. The other significant news was that the NSW Government addressed the tentatively planned end-of-lockdown, which had previously been stated as late August. Now that’s changed dramatically – they were tossing around “October” and “November” instead, as target dates for 70-80% vaccination rates and subsequent easing of movement restrictions. Sydney has been in lockdown for 7 weeks now, and perhaps we have another 3 months to go. I think the higher contagiousness of the Delta variant, combined with the Government’s apparent refusal to consider more stringent lockdown measures, is making any effort to reduce the infection numbers futile. The Government indeed seems to have given up on driving the numbers down, being content to hold the increase below exponential, and banking on vaccination numbers in a few months being enough to eventually stop it. I guess we just have to wait and see, though given the experience of the UK and USA, I’m not particularly optimistic.

In other health news, I had my final follow-up appointment with the doctor after my tonsillectomy. Everything seems fine, except I’ve had an annoying bitter taste in my mouth ever since the surgery. This is a known side-effect of adult tonsillectomies, occurring in some percentage of cases. The doctor said it was caused by stretching of the nerves during the surgery by the various clamps and things they have to stick down your throat, and should fade over a few months. It does seem to have been getting less intense, so hopefully it will fade away soon.

Today I mostly spent working on planning for my online ethics classes for the current week. The topic is “Machines and Robots”. I started with a story of a man losing his job to factory automation, asking questions about how he would feel, how his boss might feel letting staff go, and whether it was okay for companies to replace humans with machines. I went on with a story of the historical Luddites, who smashed clothmaking machines in England in the 1810s, with questions on why so many people felt so threatened that they took such action.

Then I went on to machines that pose dangers to people. If a machine injures someone, whose fault is it, if anyone’s? I used an example of a robotic vacuum cleaner gong haywire and slamming into someone, breaking a toe. I got a wide range of responses, from one kid this evening who said it’s the person’s fault, because you shouldn’t trust a machine and should be careful; one said it’s the manufacturer’s fault; one said it’s nobody’s fault because it’s probably a glitch that nobody could have predicted; and one thought the government should make and enforce safety guidelines. So that was interesting and good!

I moved on to (future) robots doing dangerous jobs. Imagine you’re a government official with the job of deciding if new police robots should take the job of human police officers. What issues would you think about before deciding? Would you let robot police carry guns? Would it be okay for a robot police officer to shoot a bank robber if it saved the lives of innocent hostages in the bank? Is it okay to program a robot to kill people in certain situations, or is that something that should never, ever be allowed?

When I ran the class this evening, it was a really good discussion, with the kids split on a lot of the questions – which is always much more fun than when they all agree! One was of the opinion that robots are still just tools, and could be used like any other tool, and didn’t see any issue at all with letting a robot police officer go into a dangerous situation and shoot some criminals – even thought it was preferable to risking a human officer’s life. Another kid was adamant that robots should never be given weapons, because they could go berserk and start killing people willy-nilly.

Finally, in a sad confluence of my two topics today: COVID and ethics, one of the kids in my class today had COVID. She was the first to join the Zoom meeting, and I made smalltalk and asked her how she was, and she said she had caught COVID, and was isolating from people at home! She did seem slightly ill, like she had a cold or something, but said she felt reasonably okay.

It was rather shocking. This is the first person I’ve known personally in any capacity to have contracted COVID. She’s been one of my best students too – very bright and articulate. I really hope she recovers and doesn’t suffer any long-term effects.

On a happier note, a flower I photographed on Sunday, after the rain: 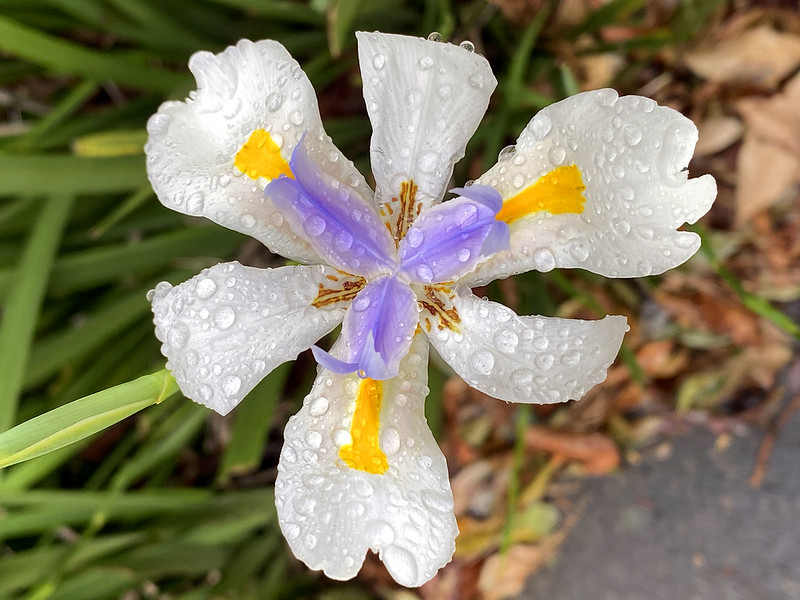 One thought on “The ethics of machines”