It’s Sunday, and I spent some time making new Darths & Droids strip. I’m up over 2000 strips now, which is pretty amazing.

My wife took Scully for a walk to North Sydney today because there was a special “Bark Park” event on. This is an annual event in a large park, specially for dogs and dog owners. There are pet-relevant market stalls, entertainment, and other stuff. And then this afternoon we both took her on another walk down to the waterfront for some ball chasing.

This evening I tried roasting vegetables. I’ve done this a few times but never figured out how to get the potatoes nice and crispy, so today I looked up some recipes and tips on doing that. They all agreed that you have to par-boil the potatoes first. The recipe I found then suggested to toss them in a colander to rough up the surface before putting them into a roasting pan pre-heated so it the oil is already hot. Well, I did all that – except I forgot the tossing them in a colander bit.

They turned out okay—in fact better than previous times when I’ve tried to roast potatoes—but not very crispy. I also added some pumpkin and Brussels sprouts halfway through the roast, since they take less time to cook. Overall it was pretty good! 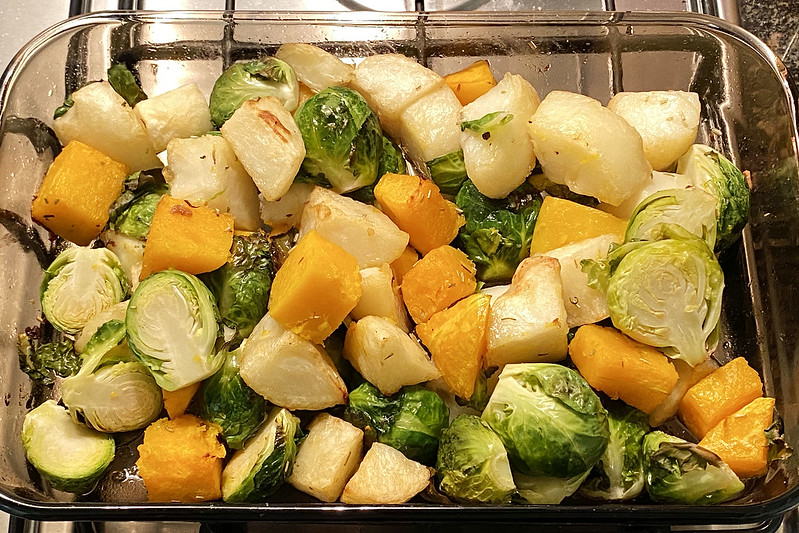 A friend of mine suggested adding baking soda to the water when boiling the potatoes, which also acts to rough up the surface. I looked this up and found many tips online suggesting the same thing. So I’ll try that next time. It sounds easier than roughing them up in a colander.

One thought on “Roasting potatoes”