My wife has taken this week off from work to use up some of her annual leave, and today we planned to go out for a nice lunch somewhere. We’d discussed a few options earlier in the week, but this morning she found a place that looked good and called up to book us a table for lunch, making sure we could bring Scully along.

We ended up at The Butcher’s Block in Wahroonga, a suburb about half an hour’s drive north of us. We got there a bit early so we took Scully for a walk around Wahroonga Park, which is a lovely bit of parkland with small rolling hills dotted with large trees, some of which were dropping autumn leaves, as well as gazebos, benches, statues, and plenty of birds. It felt a bit like a quintessentially English park.

At the restaurant we sat out the front on a padded bench facing the street, where we could see all the people walk by. Next door was a sushi place doing really good business with people popping in to grab a bento box or whatever to take away. But the place we’d chosen was excellent, with a fancy menu and attentive waiters. Although the pasta dishes looked amazing, I opted for something a bit more lunchy and chose the barbecue beef burger, with sweet potato chips. 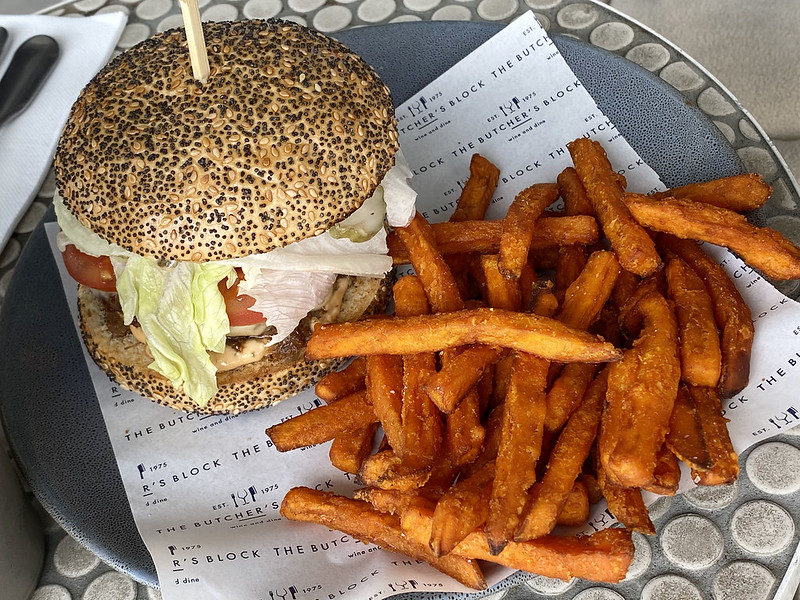 The burger had an Angus beef patty and pulled brisket, and it was very good. I also had a chocolate thick shake, and I’m happy to say it was a serious thick shake. I’ve had some disappointing ones elsewhere, where they really should have just been called milkshakes. But this one was a huge tall traditional steel milkshake cup, filled to the brim with what was basically ice cream barely on the verge of melting. And it was richly chocolatey. It was really really good.

It was so filling that it’s now after 8pm, and I haven’t eaten anything since lunch… and I really don’t feel like having dinner.

With the rest of the day I worked on a couple of things. I had to deal with insurance stuff for my market stall. Up to now I’ve been buying public liability insurance on an ad-hoc basis from the market operator each time I had a stall. But I’m planning to do another different market next month and they don’t offer this service, so I needed to get my own liability insurance if I wanted to do the market. I did some research and found a policy that will cover me for a year, meaning I can stop buying insurance individually for each market. It’s actually a bit more expensive overall, but, well, it’s a cost of doing business – so at least it’s tax deductible.

And in between I worked on more outlines for my Big Science course. Today I completed ones for quantum mechanics and plate tectonics. I also went back over the ones I did yesterday to add linkages to the other topics – there are surprisingly many. I should draw a mind map of the whole thing when I’m done with the outlines. It will be a good graphic to show during the course.