I did the same walk as yesterday with Scully, but today my wife came along as well. She didn’t recall ever having done the new route which Scully chose yesterday, and Scully picked it again today, so that was good. I stopped at the bakery along the way for a piece of chocolate babka, which is really delicious, and a good Sunday morning tea treat.

At the Oyster Cove marina, I spotted this white-faced heron, which I managed ot get close enough to to take a half-decent photo with my phone. 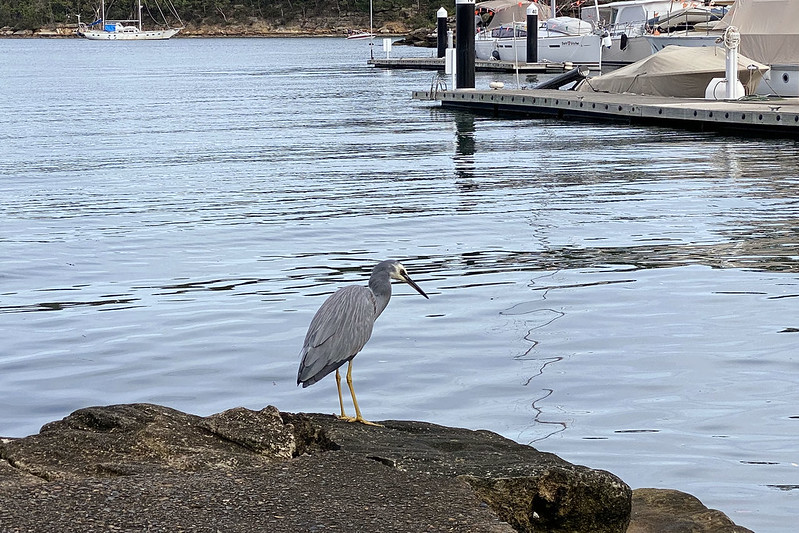 At home, I worked on more Darths & Droids strips, getting the buffer back into something resembling good health after running it down to the bone recently.

During the afternoon I got into a chat with some friends on Discord, and we talked about TV shows we’ve been watching. It was interesting because every time anyone said anything about a show they’d watched, they put it in spoiler tags to avoid spoiling anyone else who was interested in watching but wasn’t up to that bit yet. I’ve been watching The Irregulars, and am up to episode 6 of 8. Two of my friends are also watching it and are up to different episodes. So although we’re all watching the same TV show, we can’t really have a proper conversation about it without being super careful.

Remember back in the days before streaming, when TV shows aired on television at a specific time, and everyone you knew would be watching the same episode at the same time? So you could all talk about the latest episode and speculate what would happen next week? I miss those days. I watched The X-Files in its initial run, and one of my friends and I would get together every week and compare our impressions of the last episode and theorise wildly about what was going to happen in the next mythology episode. This is a joy that young people these days will never know.

One thought on “Standard sort of Sunday”