My wife set an alarm for 6:30 this morning, intending to start getting up early again this week in preparation for returning to work next week. I heard the alarm go off and assumed she got up. I woke up properly around 7:30, and she was still asleep! So, catching up on sleep, after our road trip and a fairly hectic weekend after we got back home.

After breakfast I went to buy some groceries so we’d have fresh milk and dinners this week. Catching up on food stocks.

I spent some time writing annotations for that batch of Irregular Webcomic! strips that I made in the week before we went away. So catching up on that.

And then I sorted through my bird photos from the holiday and entered them into my bird photo database. I photographed 5 species for the first time on last week’s trip, taking my total to 295 species. (There are 296 entries in the database, as I have one for “Unidentified”.) The new ones are: bar-tailed godwit, Far Eastern curlew, Pacific golden plover, scaly-breasted lorikeet, and little egret.

(I should probably point out that the list of photos in the database is incomplete – I have yet to go back through my older photos and add links to them all. The number of species is correct, I just haven’t indexed all of the photos into it yet.)

I’m pretty excited about the Far Eastern curlew, as this is an endangered species. Wikipedia says it’s estimated to number 38,000 individuals as of 2006, but I found another site that with a more recent estimate from 2015 which is even lower, at 32,000 individuals. Here’s the photo I got: 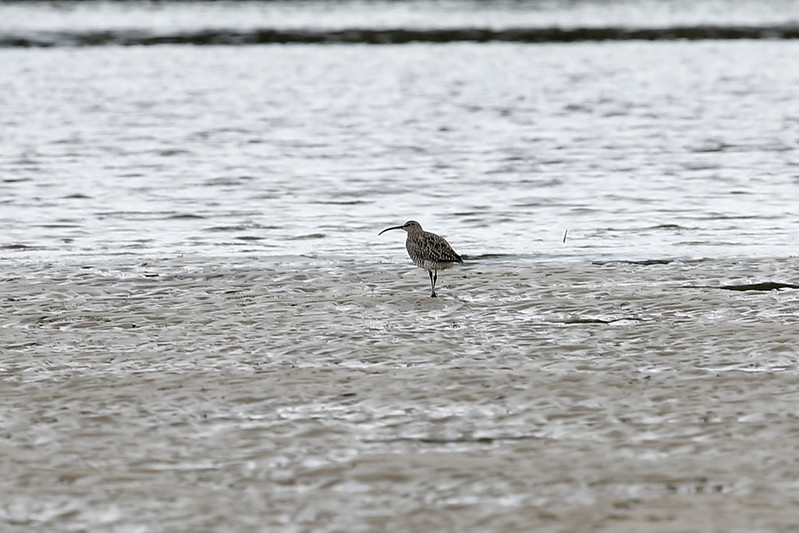 Unfortunately it was across the mudflats and I couldn’t get any closer. So, anyway, catching up on bird photo cataloguing.

And a bunch of houseworky stuff – catching up on folding laundry.