It’s day 3 of my ISO Photography Standards meeting. Today we had technical sessions on image noise, image flare, and image stabilisation. Image noise is about coming up with some sort of number that you can measure from the pixel values of an image to characterise how noisy the image looks to a human observer. Naively you might think taking a small region of pixels and calculating a standard deviation would be reasonable, and it is, but there are complications because of the different perceptual relationships of contrast in the bright-dark, red-green, and blue-yellow axes, and how these combine relative to one another to produce the perception of graininess in an image. So it’s far from straightforward, and this work is actually a revision of the previously published standard, which has since proven to be less robust than we’d like.

Image flare is about measuring the glare from bright light sources in a photo, such as the sun. This produces the characteristic “lens flare” effect that some directors sometimes artificially add to movies. In a digital camera, image flare is considered a fault, so if it’s present you want to measure it so you can compare which cameras perform better than others. This is the first time ISO has worked on a standard for this, and the project leaders are doing a lot of experimental work to try and develop a workable system for measuring and quantitatively characterising lens flare and its perceptual effect on the quality of photography.

After the meeting adjourned for the day, I unwound a bit and then worked on some comics a bit, and took Scully for a bit of a walk and play in the park: 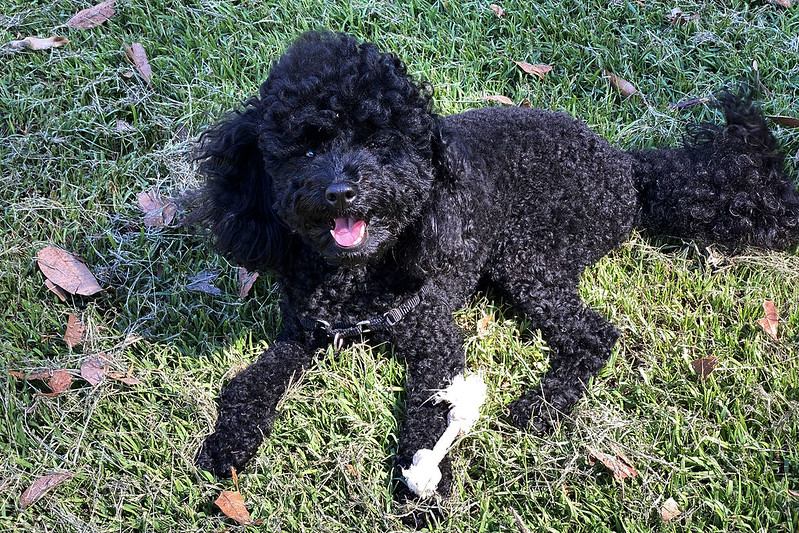 For dinner tonight I walked up the street to the local restaurant strip to have something by myself, since my wife had decided to do an evening yoga class (and she takes Scully with her).

I decided to have some pasta from an Italian place called Bravo. This used to be one of our favourite restaurants, many years ago. The owner was friendly and said hello every time we came in. The menu featured “101 pasta dishes”. Basically they had about 15 different shapes of pasta and 15 or so different sauces, and they just mixed them until they had 100 different combinations listed in the menu, and 101 was lasagne. But you could just order whatever pasta with whatever sauce, and they never checked to see if it was officially listed on the menu or not. They did pizzas too, which were okay, but I preferred their pasta. And they made their own gelato! They always had 8 permanent flavours and 8 rotating flavours which changed every week. It was absolutely delicious, and the serves were very generous and pretty cheap. The servers used those broad flat palette-knife style utensils rather than ice cream scoops, and slathered the gelato into huge mounds on your cone or into the paper cup. After going out for dinner at nearly any other restaurant in the area, we would skip dessert and pick up some gelato on the way home instead. It was the best Italian place.

Until one day in 2007, when one of the kitchen staff had a psychotic episode and stabbed the owner to death in the alley outside the restaurant. I remember hearing about it on the news and being shocked. Bravo closed for a while, but reopened, obviously under new management. When it reopened, things had changed. The gelato servers now used rounded scoops and served precisely measured balls of gelato, each serve being maybe half what you used to get. And the prices went up, almost double. Soon the pasta menu changed too… no longer 101 pastas, or whatever mix and match dish you wanted, they cut it down to 8 or so fixed combinations, and again raised the prices. What used to be a cheap, cheerful, friendly local Italian place had turned into a more upmarket place with a smaller menu and higher prices. And the gelato changed too… it just didn’t taste as good any more.

I’ve been back a few times, particularly late at night a few years ago when I was waiting to pick up my wife from her singing lessons nearby and it was the only place open for me to sit in. And, well, honestly the food is perfectly fine, but it just lacks the atmosphere and the bargain basement prices it used to have. Today I really felt like I wanted some good pasta, so I went back. And it was good. But it still felt a little hollow.

Over the years we’ve lost many of our favourite restaurants in the area. We had a Thai place we really liked, but at one point it changed owners. We used to go there every few weeks, but since it’s changed owners, maybe 10 years ago, we’ve been back in there exactly once, and found the food wasn’t as good. We found a different Thai place instead, a few blocks away, which was really good. But that too closed down a couple of years ago. Our original favourite Indian place closed a long time ago. One of the pizza places we frequented has closed (although it wasn’t our favourite one, which is still going strong, thankfully).

A Japanese place we used to go to closed recently, and we were shocked. But tonight I walked past it and saw it was boarded up. At first I thought they were going to renovate and open something new there, but then I saw the development plan posted on the boarding… and it turns out the building is going to be demolished to build a new pedestrian plaza through from the street to the street behind! I’m pretty sure this is part of the planning to provide access routes to the new Metro station that they’re currently building a block behind that location. So that’s interesting.