My golfing friend invited me today to join him for a round at Boomerang Golf Course. This a shortish 18-hole course about 60 km south of the city centre. It’s situated on top of the Illawarra Escarpment, a plateau that drops off in a cliff to a narrow strip of land along the coast. So in some places on the course we had views of the ocean, and also back north along the coast to the city. It’s not a particularly fancy course, but was nice enough. It has three holes where you have to hit over water hazards. 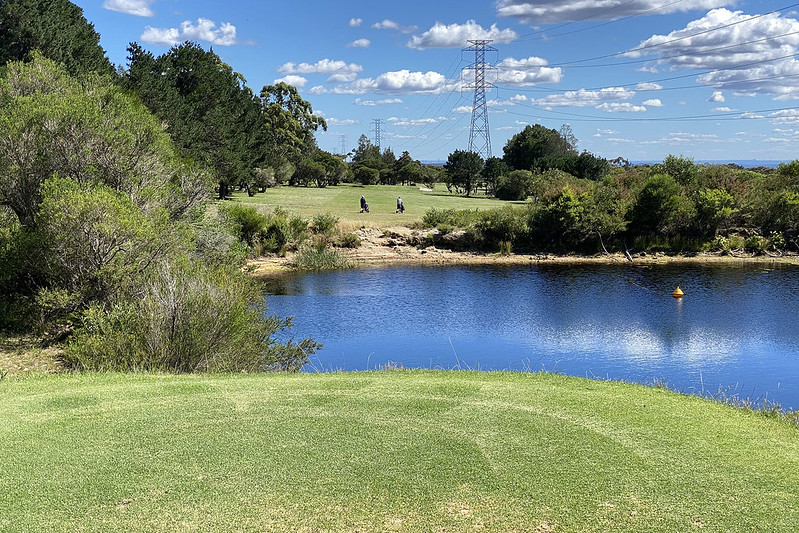 This is the 5th hole. You have to hit over the water and towards the yellow flag in the distance (between the two golfers). This was scary, because I’m still getting the hang of hitting my driver with the new techniques I picked up during the lesson I had a couple of weeks ago. On the first four holes I’d hit poorly with the driver, sending the ball skimming low across the grass. So I really needed to hit this one well to clear that water. Fortunately I managed to connect cleanly and made it over easily with a nice drive.

A couple of holes later is another water hazard, this course’s signature hole: 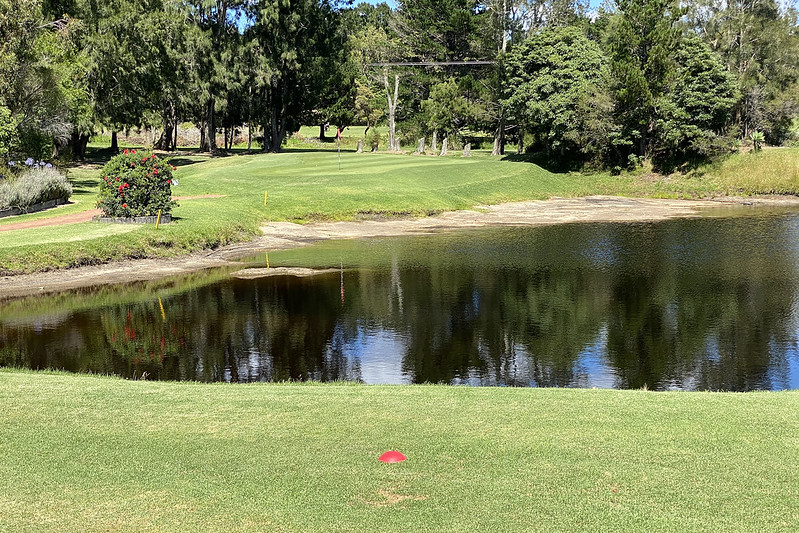 Hole 7 is a short par 3 across this small pond. This photo actually shows my ball after I hit my tee shot. It landed on the green, about 40 centimetres from the hole (I saw the pitch mark where it had bounced), and rolled a couple of metres further behind. I had a chance at a birdie if I’d sunk the putt, but I needed two putts, so scored par.

I did however manage a birdie on a later hole, the par 4 13th: 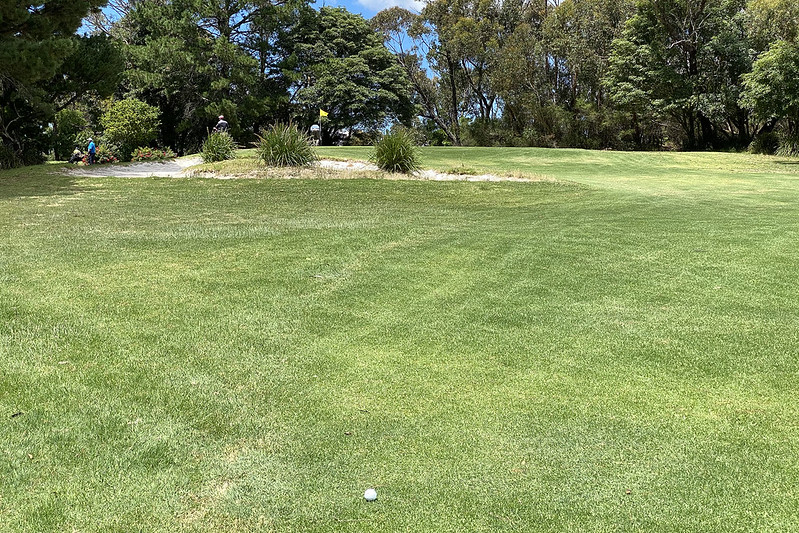 The tee shot here is blind, with the green behind a clump of trees. I hit around the left of the trees and ended up here as shown in the photo. I did a pitch over the sand and landed on the green, about 2.5 metres from the hole. And then I putted it in for the birdie! That was the highlight of the day.

My friend had invited me for this round as it was his birthday. He said he hoped to score under 100 as a birthday treat. Totalling up our scores after 18 holes, he had scored exactly 100 strokes. I scored 103. I was very pleased with that. Previously on 18 hole courses I’d been scoring totals around 130-140 strokes.

We finished at lunch time, so stopped on the drive back to have lunch at a place not far from the golf course. Then it was the drive back home to his place, where I’d left my car, and I drive home from there. I got home around 3pm. Exhausted, but having had a really fun day out.