I got up at 6:30 this morning, when my wife took Scully out for her morning walk, and I headed to the local golf course. I haven’t played at a full sized course for a couple of months, and I was keen to try out my driving after hitting a bucket of balls at the driving range last week.

Unfortunately, my driving was awful. I played two balls, hitting them one after another and keeping the scores separate. Both my drives off the first tee skewed off short and far to the right. From the second tee they both went straightish, but dribbled along the grass only about 20 metres. And so it went… another two terrible drives on hole 5, hole 7, and hole 8. I did hit one on hole 7 cleanly, but managed to hit a tree about 40 metres away, which stopped it dead. (Holes 3, 4, and 6 are short and I use various irons for those instead of a driver.)

And so I got to hole 9, not having hit a good drive all morning. The first again skewed right and short. But the second connected cleanly and soared off into the distance, straight down the fairway. It was beautiful to see! I really think I need to take some lessons or something to improve my driving.

Everything other than the driver I was hitting nicely and fairly consistently, with only 2 or 3 bad shots. I made a lot of second shots with the 3 iron, smashing them down the fairway from the awful position after a bad drive. Once I got within 100 metres or so of the hole, I was hitting approach shots and pitches nicely.

Here’s where my two approach shots for hole 5 landed: 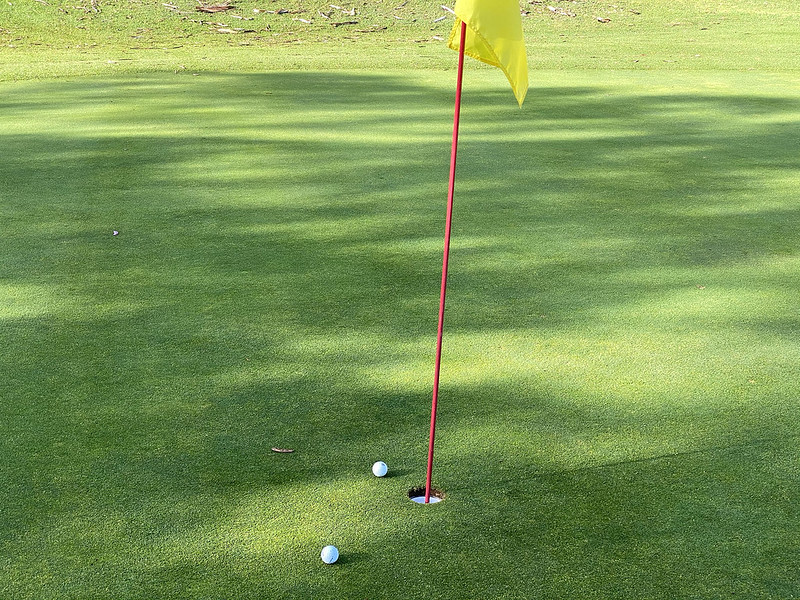 The more distant ball I chipped from off the green, about 20 metres away. The closer ball… I hit with an 8 iron from 90 metres away. I was watching it fly through the air, land just before the green, bounce onto the green and roll… towards the hole… I was willing it to go in, but you can see where it stopped. Let’s just have a closer look! 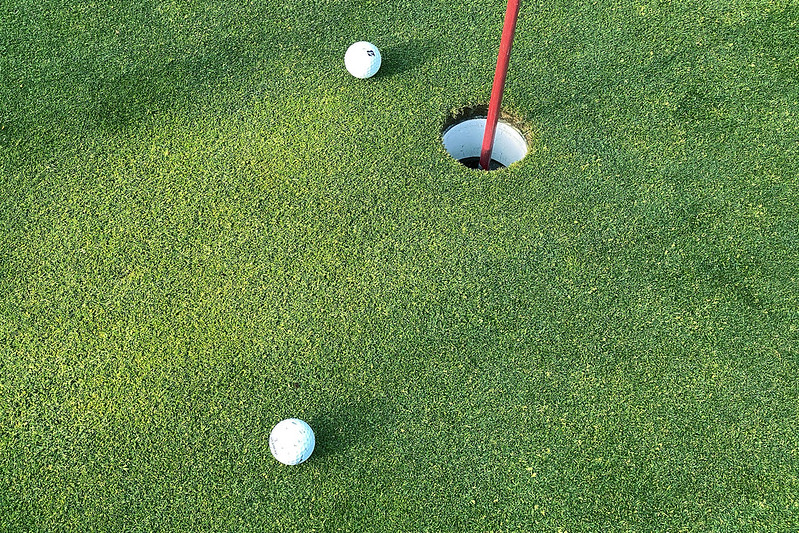 Wow. Clearly one of the best shots I’ve ever played.

And… my putting was probably the best day I’ve ever had. I was sinking nearly everything from distances up to about 1.5 metres. All in all, this more than made up for the horrendous driving. My previous best score for this 9 hole course was 55 strokes. Today with my two balls I scored 53, and 49. I am stoked with this performance, and if only I can get the driving under control I might actually start getting even lower scores.

I was done by 8:30, and headed home. I mostly worked on comics, but also spent some time exploring music on YouTube and iTunes, finding weird cover versions of songs I like and trying them to see how good they were.

For lunch I walked up to the fish & chip shop. But rather than get fish & chips, today I decided to try something different, and went for the barbecued fish burger. I’d like to say it was good, but I was a bit disappointed, and I don’t think I’ll get that again.