If you recall yesterday, my market stall day was cancelled due to forecast storms today.

It did rain a little overnight, but lightly, and it had stopped by the time I got up this morning. It remained dry… all day until around 5pm. The sun even came out for extended periods. When the rain finally came, it was about 5 minutes of light spattering, and then it stopped. There were actually thunderstorms in parts of Sydney, but very localised, and not until after 4pm. So basically the forecast storms during the market day didn’t eventuate at all, as we all would have been packed up and leaving before 4pm.

Oh well… I can’t blame the market organisers. They had to work with the forecast they had. It is another case of what’s become a common occurrence here though – the Weather Bureau forecasts rain, and pretty much nothing eventuates. We have had a little rain in recent months, but not a lot. Grass in parks is starting to die off and go brown all over the place. Just looking up the stats, so far we’ve had 6mm of rain in the first 18 days of October, while the monthly average is 77mm. In September we had 23mm, while the average is 68mm. In August we had 79, with the average being 81, so that was close to normal, but since August it’s been noticeably dry. And this in a spring which the Weather Bureau had predicted would be wetter than normal due to La Niña.

Instead of the market, I mostly spent the day at home, just going out with Scully a few times. For lunch I made bruschetta: 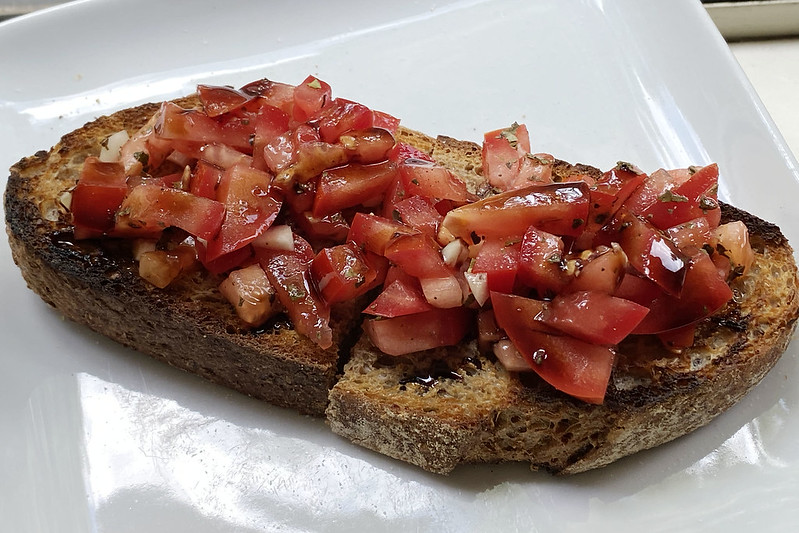 Chopped tomato, garlic, basil, mixed together and spooned on toasted wholemeal sourdough bread drizzled with extra virgin olive oil, then topped with salt, black pepper, and caramelised balsamic vinegar. I enjoy a simple tomato sandwich, and this is like the grand royal version. Yum!