I never used to be a runner. I wasn’t athletic at school or university. I played a bit of casual tennis and sometimes squash, and later took up swimming a bit, but I’ve never really been dedicated or high performing.

A few years ago I thought I should stop being lazy and do some physical activity for fitness and health’s sake. I took up jogging around the neighbourhood. But the area is hilly and going up and down hills the whole time is just a drag. It petered out within a year or so.

In October last year decided to really give it a go again. Rather than do random distances around the neighbourhood, up and down hills, I now had Strava, so I could track distance and time. I decided to go up to Gore Hill Oval, a football/cricket field not far away, and run laps on the flat ground. 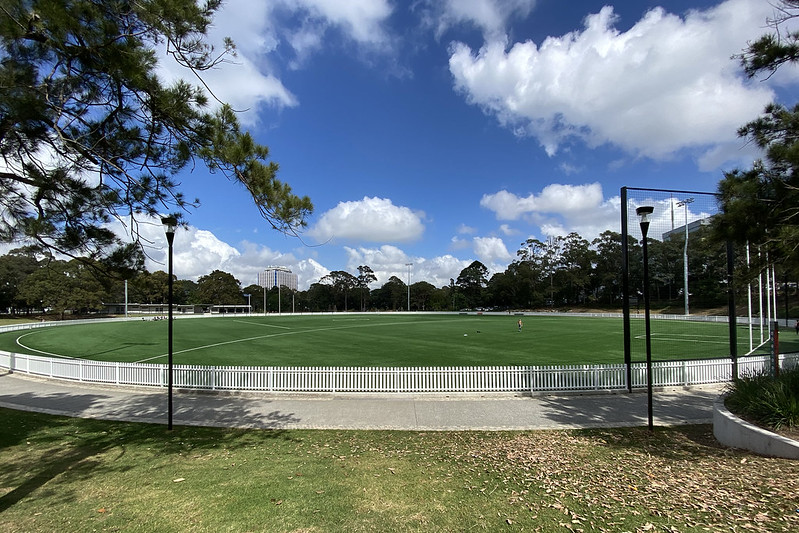 Gore Hill Oval is a kilometre from my place… uphill. To start with, I started timing myself from home, so including the uphill walk to the oval, which I sort of jog-walked as my legs could bear, before reaching the oval and completing enough laps to take my total distance to 5km. I did it once every week or two, and got times around 30-31 minutes.

Then the summer hit, and the bushfires that blanketed the city with smoke for weeks on end. It was unhealthy just to be outdoors, let alone huffing and puffing for half an hour of exercise. So I stopped running. Once you start being lazy again, it’s easy to keep it up.

I didn’t start running again until July this year. This time I figured I’d walk up the hill to the oval, and only start timing my 5k run when I started doing laps on the flat ground. That immediately reduced my time to around 29 minutes.

I’ve kept it up since then, one run a week, only occasionally skipping a week (twice so far up to now). My times are now around 27:30 consistently, but it varies a bit. The weather has an effect. Cool and dry is good. One morning was very hot, and my time was bad.

Today it’s cool, but very humid. The air feels thicker and doesn’t inhale as easily. Sweat is dripping down my face, and into my eyes, stinging with the salt. I feel like I’m labouring and doing a slow time. 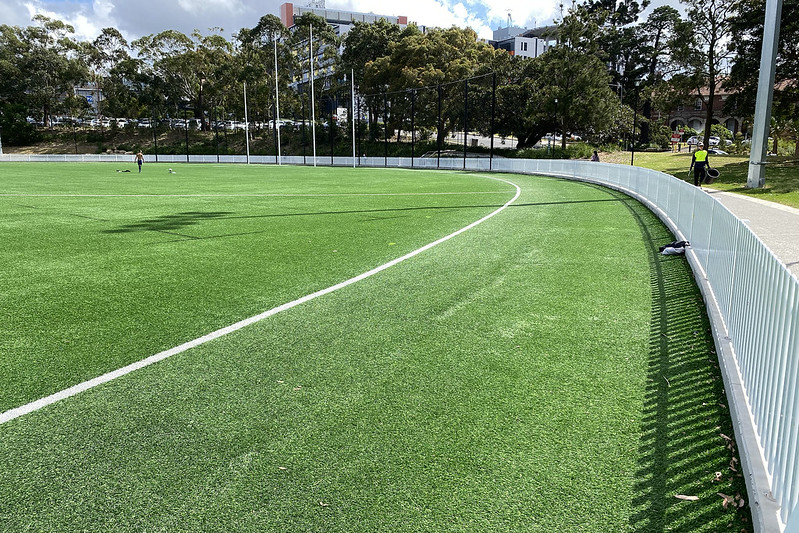 The Oval is an interesting place. There are always people here, either running laps like myself, or simply walking laps, or using the field for soccer practice like the guy who is kicking goals, bouncing the ball off the picket fence so it returns to him. There are people walking dogs. There are mothers and babies in prams and strollers. There are personal trainers and clients, the former pushing the latter to exert themselves and not give in.

They say there’s a “runner’s high” that you feel when running – a feeling of euphoria that drives people to keep going because it feels so good. All I feel is exhaustion and an overwhelming desire to stop.

I stumbled onto a thread on reddit yesterday where someone was saying that running feels surprisingly good. A bunch of people commented that yes, it does, they love that feeling they get while doing a run. One person commented (paraphrased):

“I wish you could show me how to get that feeling. I run, but only because I force myself to because I know it’s good for me. I hate every single step and when I’m doing it all I want to do is stop and never run again.”

That’s me. I’m running and I hate it. I just want it to stop.

Younger guys, bare chested, impressive six-packs, are doing laps of the oval too, overtaking me every few laps. Yeah, if you were my age you wouldn’t be running so fast!

Maybe you would, but I can dream. There are other people, old and young, just walking around the oval for exercise. I’m lapping a few of them. Eat my dust!

The end is close now. Light at the end of the tunnel. If I can just complete this lap, there’s only one more to go, and then – blessed relief – I can stop.

I sing lyrics in my head to stop myself thinking about how much I want to stop running.

Halfway around I pull out my phone and open Strava to check the distance. 4.84 km. I pick up the pace and start a sprint to the finish. My breathing, heavy but regular, shifts to double time as my legs pump the ground for the last hundred and a bit metres.

At 5k I turn off the tracker and slow to a walk as I catch my breath. My time is 27:42. Not as bad as I thought with this humid air, but I’ve done better.

I wander over to the open-air gym equipment next to the oval, and go through a stretching routine and some sit-ups and push-ups.

Other people are still using the oval. A mums & bubs fitness class begins. 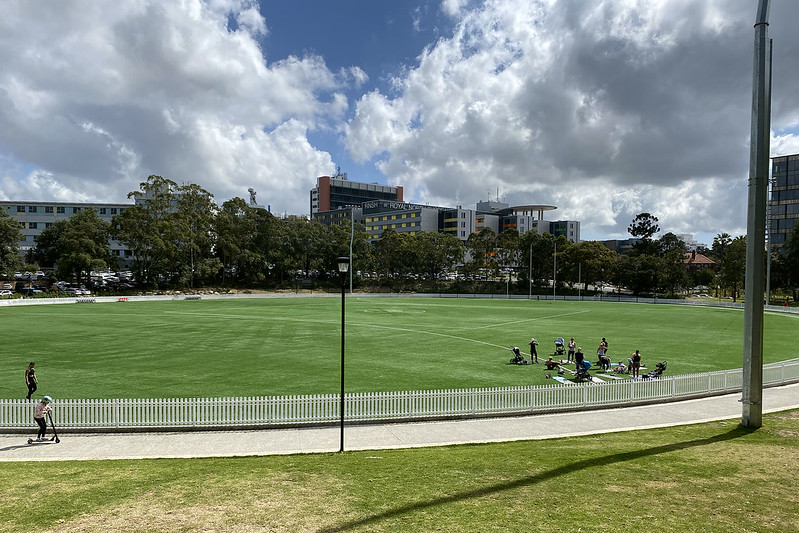 I stretch my legs out. I head off for the downhill walk home.

It’s done. Until next week.