I missed Friday’s post due to being busy in the evening. I went out for dinner with my wife and Scully to a local Mexican place. Nowhere near as good as Mexican food in California, alas, but it’s passably good. But the place was busy and we were the only ones sitting outside in the cold winter night (since Scully was with us), and the service ended up being a little slow, so we took longer than expected. And then when I got home, my fortnightly board games night with friends was already underway, so I dived straight into that, and didn’t get time to write a blog post.

Saturday morning was housework time – cleaning the bathroom and the shower, and vacuuming and stuff. It was cold today, we only reached 17°C, and there was a slight breeze which made it feel colder. But still not as cold as it sometimes can get in Sydney – in fact I’d say we haven’t had a seriously cold day yet this winter.

I saw the first magnolia flowers a few days ago, but only took a photo today. 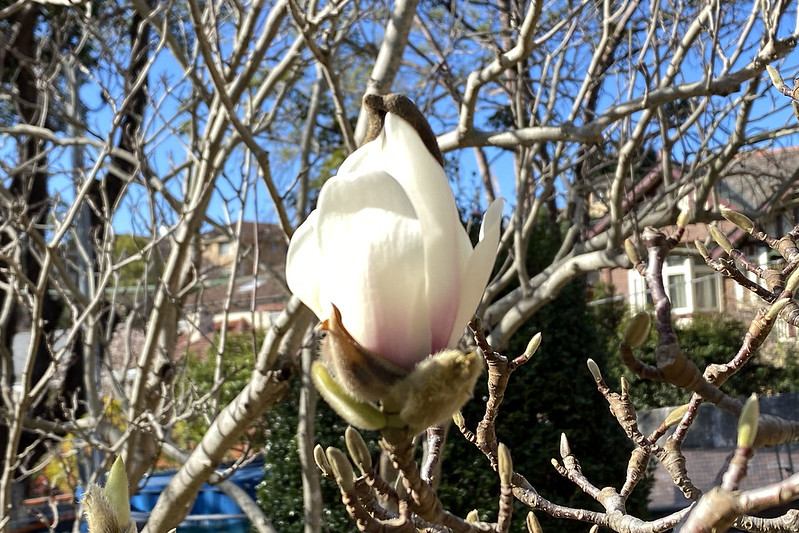 This isn’t a lone earlybird bloom either. There were several on the same tree, and more on another couple of magnolia trees that I passed today. I pay attention to when the magnolia flowers first appear every winter, and have been noticing that they are consistently getting earlier every year. This year is just ridiculously early. The first photo I have of magnolias last year was from 10 July, so this year they’re a week earlier again. A few years ago, they wouldn’t appear until August, and years before that, late August or even September.

The TV news tonight had a story on the dry, mild winter we’ve been having, saying that it could be a precursor to another horrible fire season like we had last summer. It’s all a bit depressing really.

On the positive side… I did some tax accounting and ticked off a few tasks that I needed to do with respect to recording deductions and stuff like that. The new tax year just started here in Australia, so I have the 2019-2020 tax return to do soon. Fun fun fun.