Rain came in overnight, and it was still heavy this morning. We’re still at a point where when the weather person on the nightly news says it’ll rain, the main newsreader replies, “Good news!” SO although it was pretty heavy, it was most welcome.

It meant I had to drive to my Ethics class though, instead of walking like I usually do. I mean, I could have walked, but I would have been pretty wet by the time I got there and that wouldn’t have been fun.

Because of last week’s Year 6 camp, this was only the second week of lessons I’ve had with this class, and I was still busy learning the names of the kids. I think after today I have about half of them memorised and matched to faces. I remember the distinctive individuals first, and end up struggling with the last few who look somewhat similar.

The syllabus repeats every two years, so I’m now teaching the same material I did in 2018 (to kids who haven’t done it yet). Years 5 and 6 get the same material, so Year 5 classes are also learning the same stuff this year, and both years get the odd-year syllabus next year. I think this class might be a little more challenging behaviour-wise than last year’s students. There are a few boys who are chatty when they should be listening.

One of the girls looked rather sick, with what looked like a pretty severe cold. I asked her a couple of times if she was okay, and she insisted she was. But honestly if I was a parent and my kid looked like that before school, there’s no way I’d send them in. After class I informed the front office and asked them to notify her regular class teacher and keep an eye on her for the rest of the day.

Before heading home I popped into the supermarket near the school to get milk and bread. I was amazed to see that several items had sold out or were close to – a result of the near-panic levels of buying that people here in Sydney are doing to stockpile supplies in case the COVID-19 coronavirus gets to a point where people need to start staying home for weeks at a time. 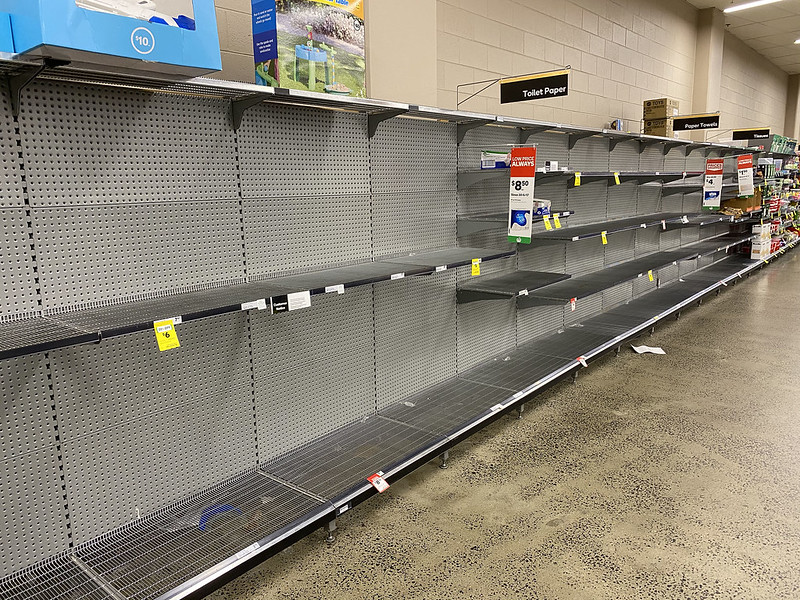 Toilet paper seems to be the number one item that people want, for some reason I can’t quite fathom. Paper towels and tissues were also completely sold out. 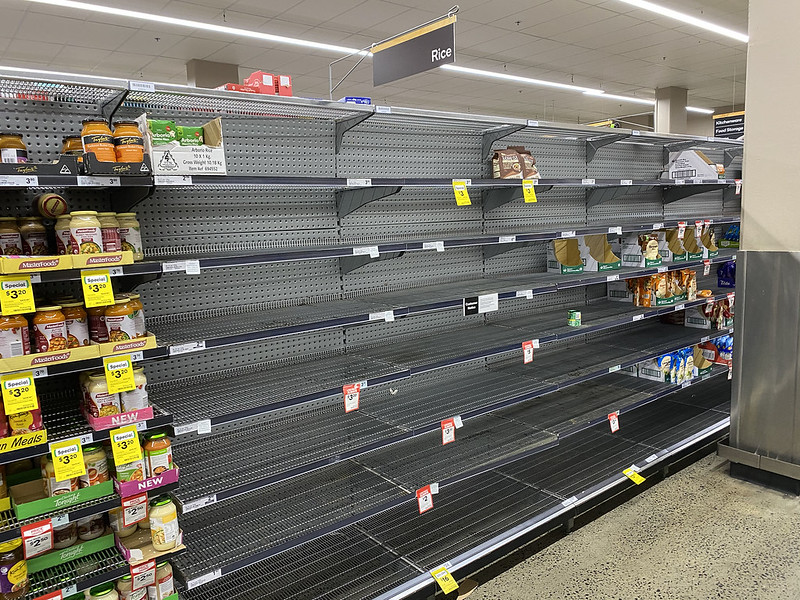 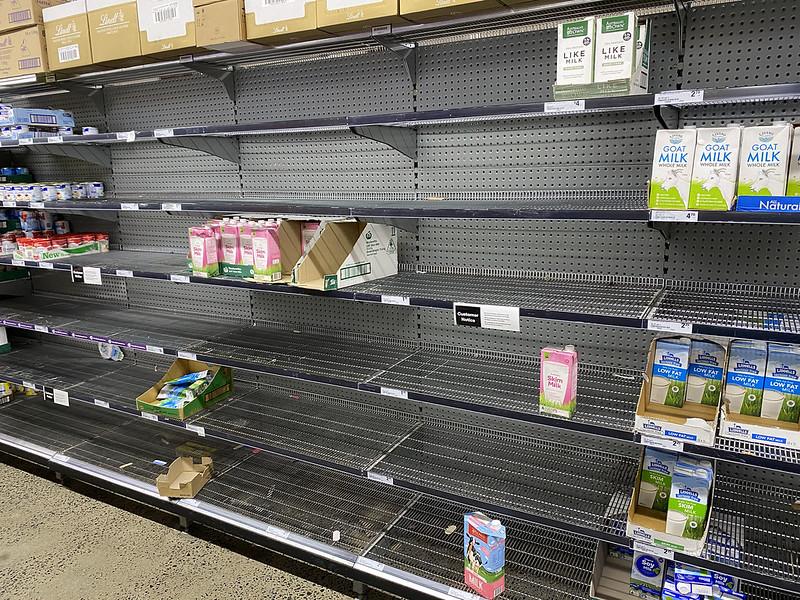 Long-life milk. There was a little bit of skim milk and goat’s milk left. 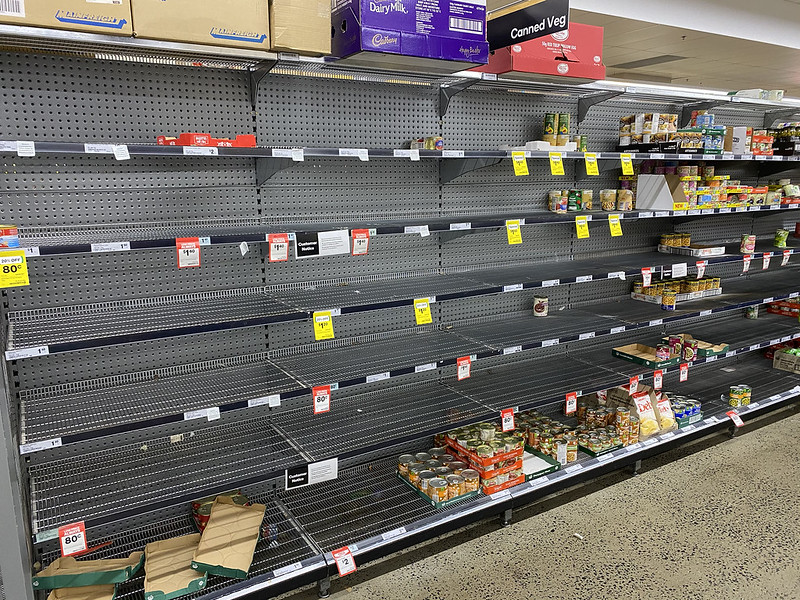 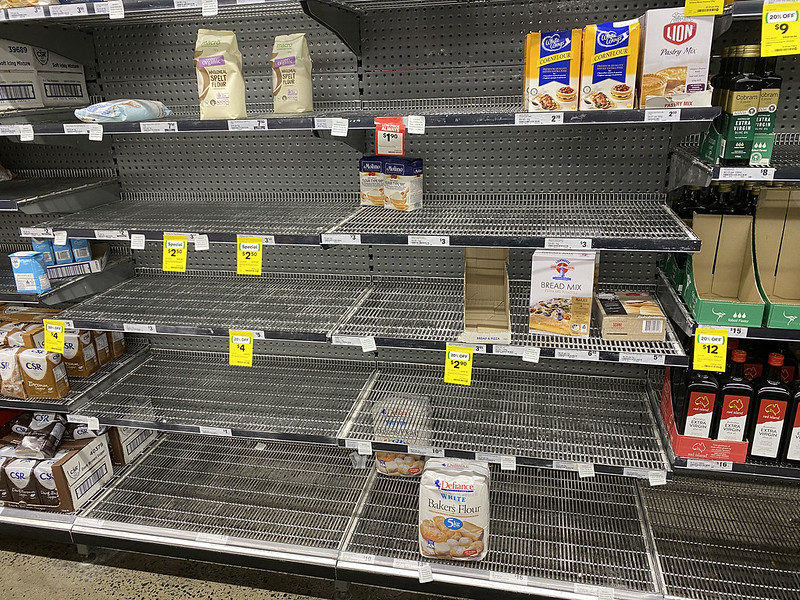 Flour. There’s mostly just a bit of bread-making flour left. I guess most people don’t bake bread at home. Although maybe they should consider it. 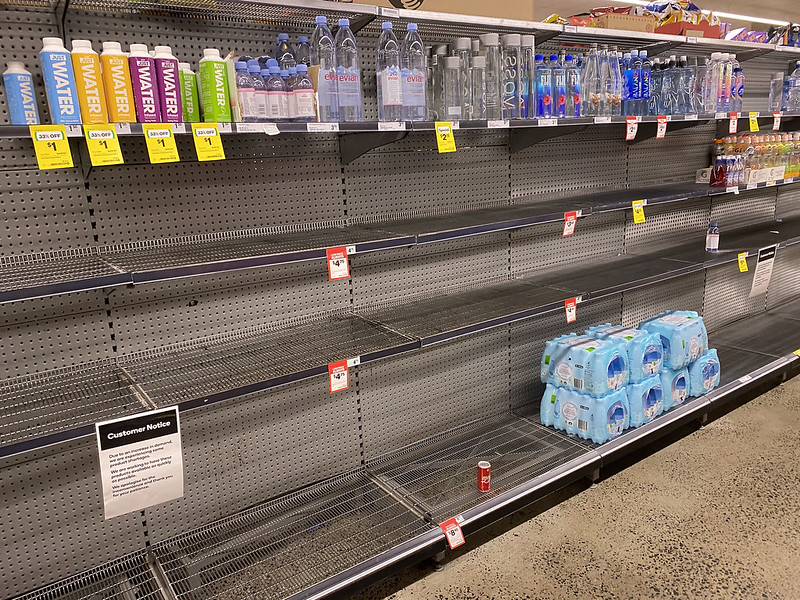 Bottled water I don’t understand. There isn’t going to be a disruption to the water supply. Some people seem to be preparing for nuclear war or something. 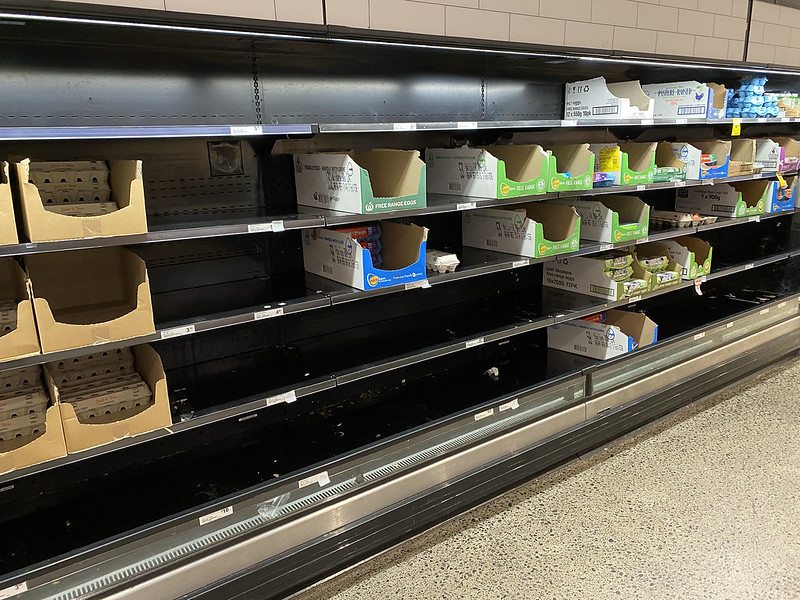 Most puzzling: eggs. Who’s coming in and buying 8 cartons of eggs today, thinking they’ll last for two or three months???

It’s interesting because there aren’t any actual shortages of any of these items. All these shelves will be restocked overnight, and will keep being restocked for the foreseeable future. At some point people will realise they have a spare room full of toilet paper and rice, and there’s still plenty of both on the supermarket shelves. They don’t need to hoard tons of the stuff – they just need enough supplies to last a couple of weeks of self-isolation if they get the virus.