Last night was fortnightly Games Night, so this is Friday’s post a bit late.

My contact from the USA who I played golf with last week suggested we try a different course: Cammeray Golf Club. We arrived at 10:00, and the day was already very warm and sunny, so I made sure to put lots of sunscreen on, and wear a large-brimmed hat, and carry a bottle of water.

The Cammeray course is a shortish 9-hole course, no par 5 holes. There were lots of trees down the edges of the fairways, and I took advantage by “playing in the shade” on some holes – i.e. mis-hitting my ball so that I had to hack my way under the trees instead of along the fairway. 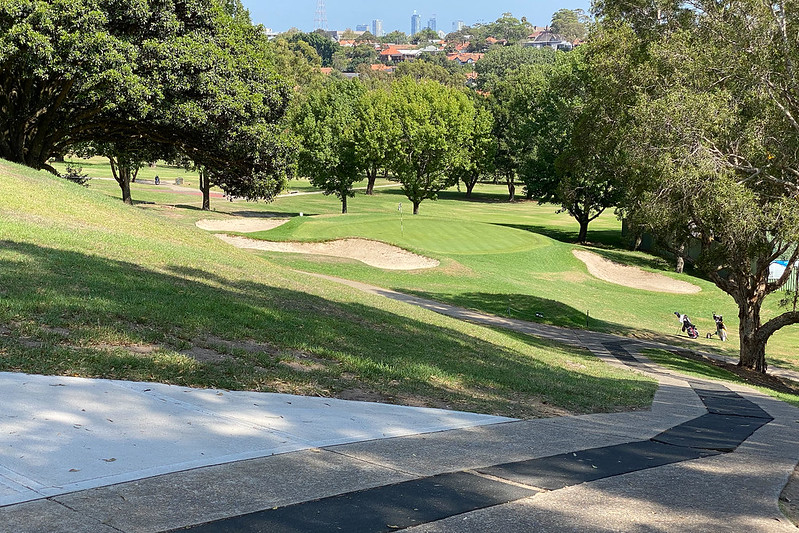 Above: a view down to the hole 3 green, but this is from about halfway up the hill that leads to the tee position (another group were teeing off as I took the photo). From the tee this is quite a drop down to the green. 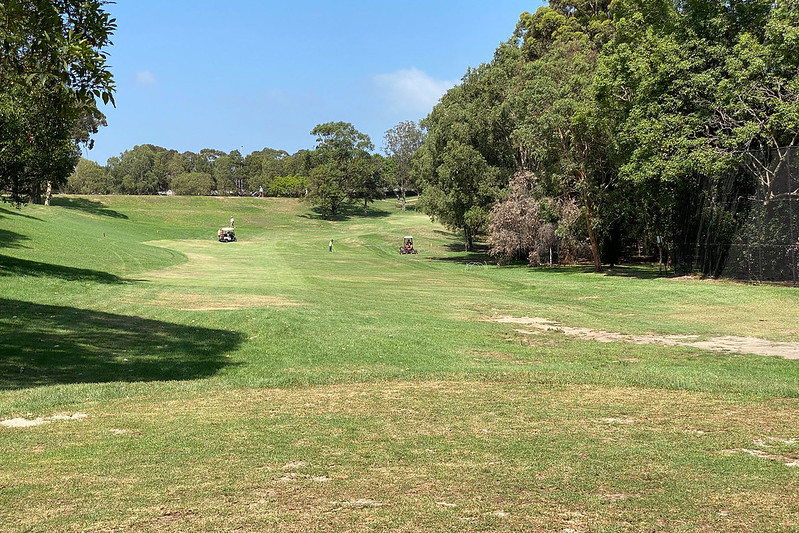 Hole 5, a longish par 4. We played the course twice through, for a total of 18 holes. My first time on this hole I hacked my way slowly up the fairway, but my second time around I managed a good solid drive, and followed up with a long second shot that landed tantalisingly close to the green – just a few centimetres off it. Essentially I made the “green in regulation” (i.e. reached the green in 2 shots under par – giving me two putts to make par). Alas the putt was very long and I didn’t hit it well, so ended up with 6 strokes. 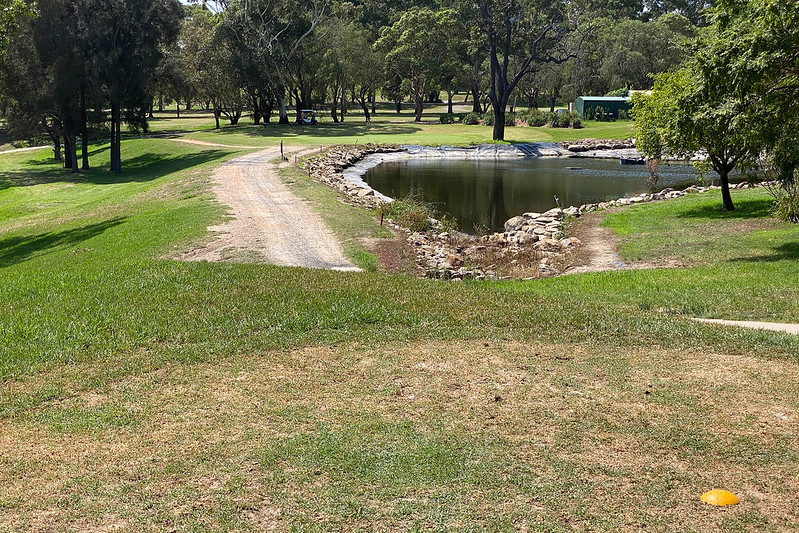 Hole 6 is the water hole. You have to hit directly over this little lake. The lake is unfortunately low because of the current drought conditions – the water level should be a metres or so higher as you can see from the edges. Nevertheless, on this day it sported a nice variety of birdlife: I spotted a white-faced heron (the prominent upright grey bird on the near shore), little black cormorants and little pied cormorants (on the small rocky island), Australian wood ducks (two near the signpost in the bend on the prominent path at left, anther at the base of the large dark tree behind the lake), and masked lapwings (none that I can spot in this photo).

We finished close to 2 pm, and I rested for a while in the clubhouse air conditioning before heading home for a long, cold shower. It was very hot and humid, but good to get some exercise!

In the evening I headed to Games Night, where we began a Magic: the Gathering draft tournament with 8 players, using the recentish Throne of Eldraine set. This set has a fairy tale theme, and I really wanted to give it a try.

During the draft, I mostly picked green cards, and settled on white as a support colour. I considered grabbing a couple of giant spiders, with their ability to block flying creatures, but I realised I was seeing very few flying creatures go past, so I de-prioritised flying defence in favour of other things. I won my first game fairly easily as my opponent struggled to get much on the board. But in my second game, I saw where all the flying creatures had gone! My opponent played four flyers one after the other, and I had no way to stop them, and lost that game quickly.

We played a few more games before it got too late to continue. We’ll finish off the round-robin games in later Games Nights. But everyone agreed that the set was fun and interesting, so it was a big hit!