When I got up this morning, I opened some windows… and immediately closed them again. Smoke had descended on Sydney again, from the ongoing bushfires. It wasn’t as bad as it has been, but certainly bad enough to avoid opening any windows and avoid going outdoors if possible.

But then I got a message… A guy from Houston who had posted on a forum asking about golf in Sydney a few weeks ago – and I had responded with some info – had just touched down here at 06:30 , and wanted to hook up for a game. This morning.

I told him I needed to be home by 2:30 pm, so we’d have to tee off no later than about 10 am to give me us time to play and me to get home. A few frantic messages later, we had a 09:44 tee off time booked at Moore Park Golf Club… and I had to leave almost right away to get there in time. Fortunately by the time I got there a storm had moved in and some rain had cleared the sky out a bit, so it wasn’t so smoky by the time we started playing. It rained on us a bit during the first few holes, but then cleared to a muggy overcast.

Moore Park is a longer course than I’ve ever played – it has four par 5 holes, and I’d never played a par 5 hole before. Our visitor was much more at home, and played the course a lot more competently than I did. However, I did manage to par the par 3 fifth hole: 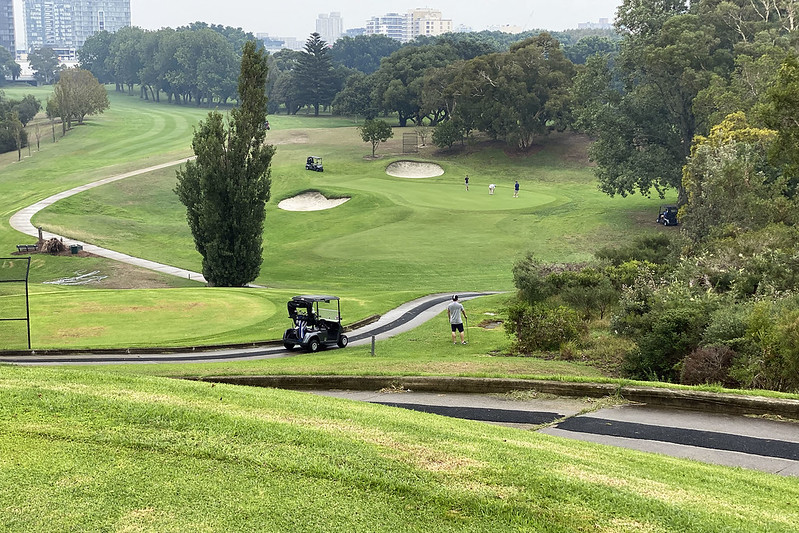 And I scored two single bogeys, on par 3 and 4 holes. So I was happy with that, although my score on several other holes really blew out. Here’s the 17th hole, a par 4 on which I scored 8. 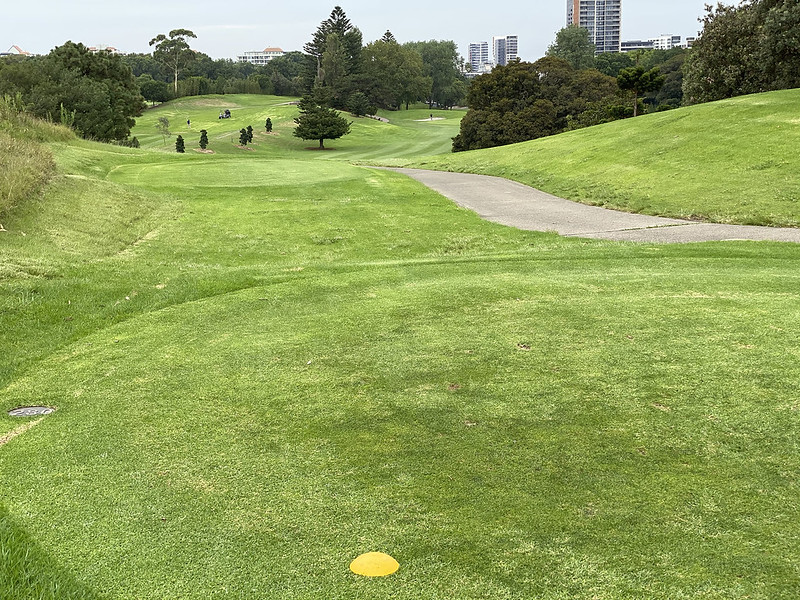 We finished the round in good time, and I made it home a bit before 2pm, so that was good. My wife had an appointment at a nearby hospital and I had to look after Scully. The appointment was a positive one – it was her orientation as a Delta therapy dog owner, prior to her first patient visit with Scully, which is on next Tuesday! While my wife was out, I took Scully to the dog park for a run around and a walk along the shore.

And then this evening we all went for dinner at a Thai restaurant that we like, a short drive away. They have outdoor tables, so we can take Scully. I was really hungry after the golf, and not having time for a proper lunch!