I had a busy day today. I had a meeting scheduled at 2pm with a guy who runs an art photo printing company. One of my contacts through the Standards Australia committee for photography that I chair was the former owner of the business, and he arranged to meet us there and introduce us.

The site was in the city, not far from where one of my friends works, so I contacted him and asked if he wanted to meet up for lunch beforehand. With a lunch appointment set, I headed into the city on the train a couple of hours early, so I could browse around in some bookshops and then walk from there to lunch. I took some photos along the way: 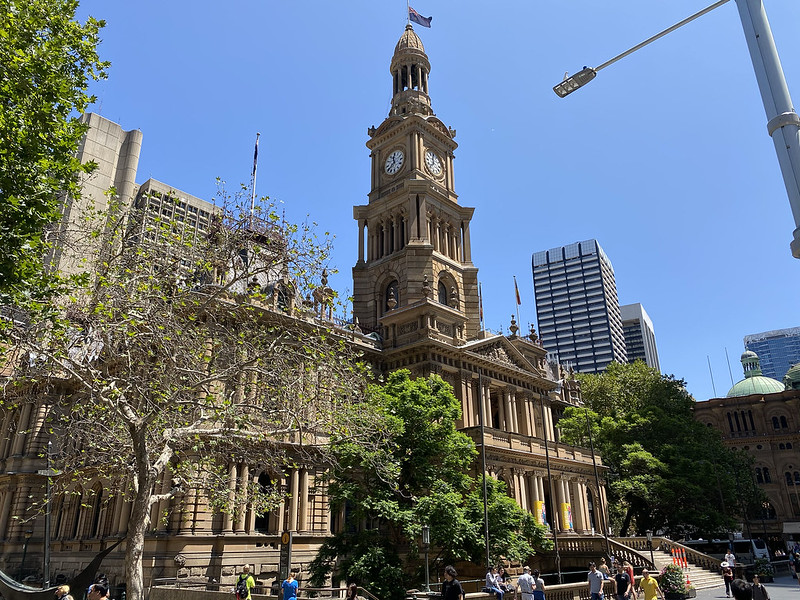 This is Sydney Town Hall, the seat of the local city government council. They’re the ones who put on the famous New Year’s Eve fireworks, among other things. This lovely old building also hosts concerts and other events. It has a magnificent pipe organ.

From here I walked south down George Street, the central city’s main thoroughfare, until I reached Broadway, which is really just the continuation of George Street as it gently turns west. Here there are some lovely old Art Deco hotel/pub buildings: 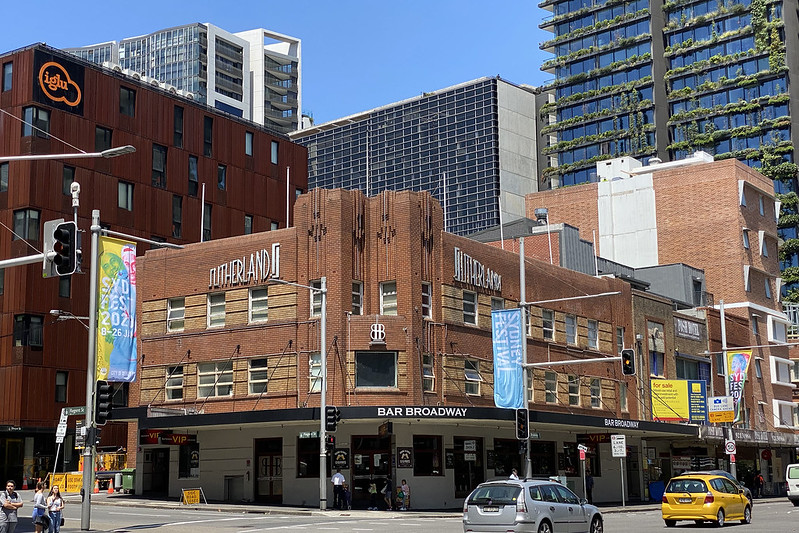 This is the Bar Broadway, which used to be Sutherland’s Hotel (hence the old signage above). Behind it you can see the tall tower of the newish Central Park building, with the greenery on the exterior. Closer up it looks like this: 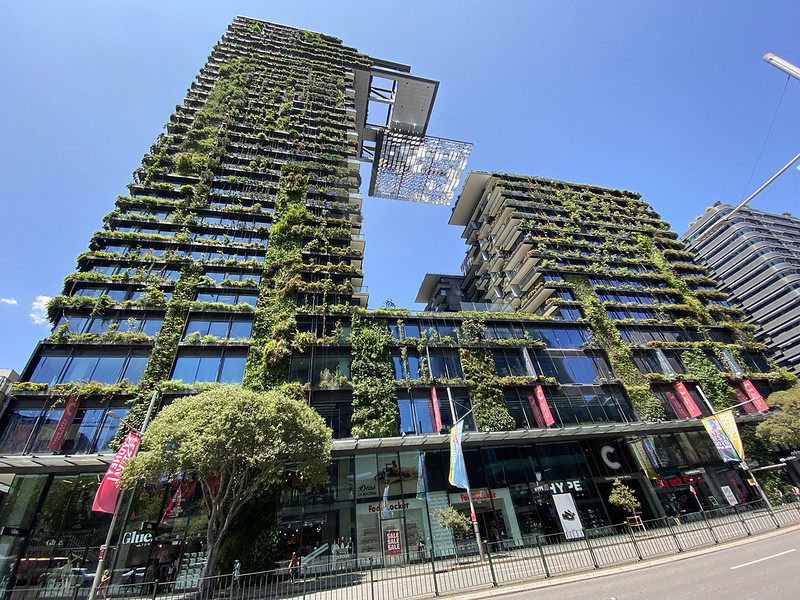 The dangling thing over the middle is an array of solar reflectors, to reflect sunlight down into parts of the building that are in the shade. This building is mostly student accommodation, because the University of Technology, Sydney, is right across the road. Here’s an exterior walkway along the road just outside one of the university buildings: 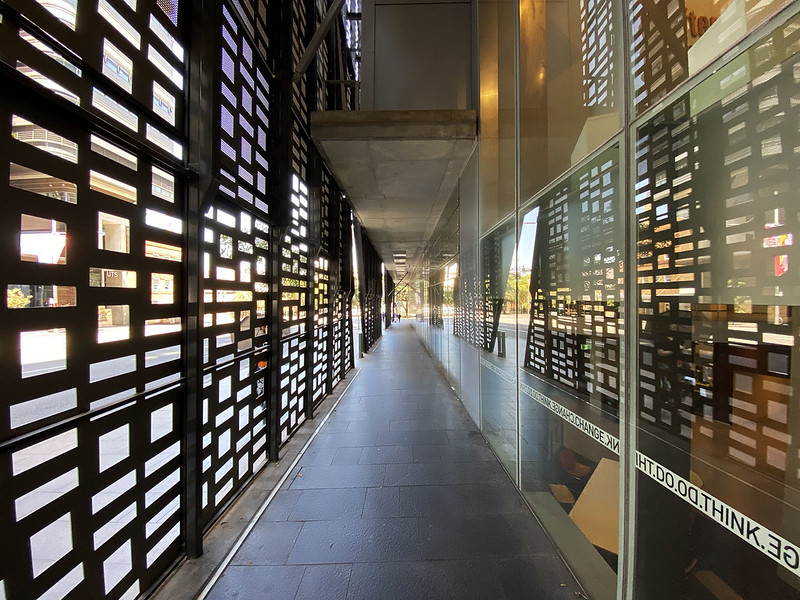 And out the other side there’s another old Art Deco hotel: 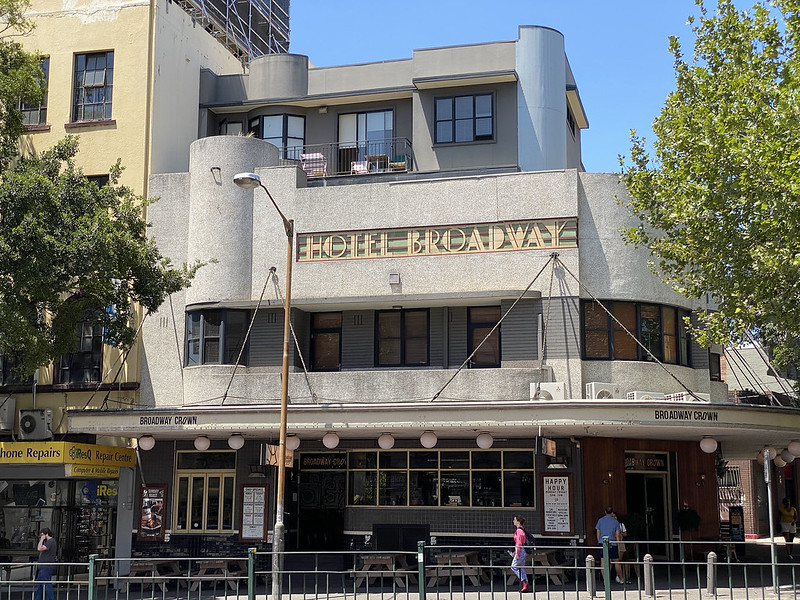 This one is the Broadway Crown, formerly known as the Hotel Broadway. This is near where I had lunch with my friend. We discussed various things, including our stalled comic project, Eavesdropper. He said that what we’d been doing was essentially a first draft of the story in his head, and it wasn’t a final polished version in his opinion. What he needs to do is get the whole story down on paper, and then revise it. So illustrating it further as a comic doesn’t really make sense – doubly so because of how much effort I had to put into drawing the artwork. So I think we can officially call the comic project finished, albeit not completed.

We also talked about games we’ve been playing lately and plan to play in the future. I need to knuckle down and write the next instalment of our current D&D adventure that I’m running.

After lunch, I headed to my meeting at the photo printing place. I met the owner and he showed me around the print shop, and we discussed the various printing machines and paper stocks and mounting and framing options he had available. I said I wanted to to start selling mounted and framed prints of my photography, from an online shop on my website, and he said they had art photographers listing photos for sale on the print shop’s website, so the photographers themselves don’t need to run a shop site. Customers can order prints, they print and frame and ship them, and give the mark-up to the photographer, minus a small percentage for hosting the online shop. This sounds perfect! So I’m going to go through the details with him by email and produce some photo files that they can sell as large prints. Initial selections will be some of the photos that you can see on my portfolio site.

I got home late in the afternoon. My wife and I took Scully for a walk and run around the park near our place. Then we made some more pizza with the home-made feta. I’d left a chunk of it sitting in a bowl of milk in the fridge all day, to draw some of the salt out, and that trick worked well. The resulting cheese was milder, and the pizza wasn’t as salty as yesterday.

As I was relaxing into the evening, news broke of a fire in a school in Sydney. It was Lane Cove Public School, which is the school where I teach Primary Ethics! Fortunately the kids are still on summer holidays, but their school hall and canteen are reported to have burnt down. The hall apparently had a lot of musical instruments stored inside, so the students are going to have it tough until they can buy new instruments. Fortunately no classrooms were affected. It’s going to be interesting to see how the recovery is going when I return there in a few weeks to start teaching a new year of kids Ethics.