My aunt has made it out of the bushfire danger area, after four days stranded at her holiday home, cut off from all external access by the bushfires. The road reopened briefly and emergency services personnel escorted vehicles out to safety in small groups – in case damaged trees fell across the road and cut travellers off, they wanted to make sure they knew where everyone was. She’s now back with family and safe. Whether her holiday house survives today is another story which we have to wait and see.

To take some pressure off, last night I attended the fortnightly games night of my group of gaming buddies. I played a game of 7 Wonders: Duel with the host while waiting for others to arrive. I hadn’t played this game for several years and was trying to remember strategy on the fly, so was at a bit of a disadvantage, but I managed to only lose by 2 points: 64-62, so I was pretty pleased with that.

When others arrived we had dinner, and then launched into a game of Wingspan. 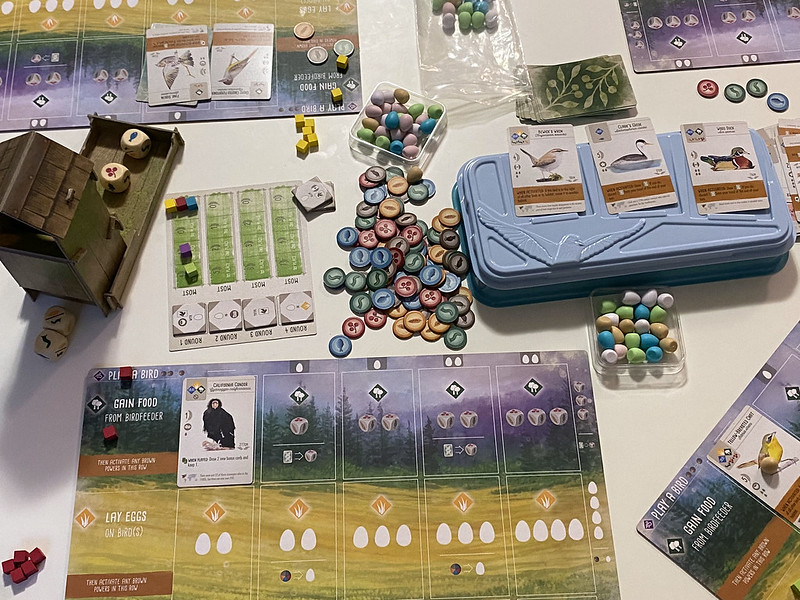 Rather than collect birds with lots of activated powers, like most people do, I tried a very different strategy, going for birds that gave me extra Goal cards, and then trying to fulfil as many of the goals as possible. I ended up with 4 Goal cards, requiring me to collect: birds that only nest in wetlands, birds that only eat invertebrates, birds with wingspans under 30cm, and birds with anatomical body parts in their name (e.g. roseate spoonbill). I managed to maximally fulfil 3 of the 4 goals, and partly complete the fourth, for a total of 25 goal points, which was way more than anyone else got. The issue was I got zero egg points, and moderately low scores for the other point categories. I was worried that pursuing a radical strategy might not be viable, and I’d lose by a lot, but it turned out those 25 points helped me to third place out of 5 players, not far behind second place, so again I was fairly happy with that result.