I didn’t bother staying up until midnight last night. I was too tired and just wanted some sleep. Although the fireworks on Sydney Harbour woke me up again at midnight.

I got up this morning and checked for any information from my aunt and uncle, after yesterday’s events. It turned out I was under the wrong impression. My aunt had travelled down to the holiday home, but my uncle and their two children had stayed home, intending to join her later. So my aunt was actually trapped in the town last night by herself (with other residents). My uncle tried to drive down yesterday to join her, but was stopped by the roadblock at Kiama, and never made it.

This morning, as far as my family is concerned, the news was good. My aunt is safe, and their holiday home was spared, although fire swept through Conjola Park, just west of Lake Conjola. Overnight, at least 89 houses were destroyed in Conjola Park, but only 3 in Lake Conjola.

Here’s a photo of one of the homes there last night. (I don’t know who took the photo – my cousin sent it to everyone in my family via Facebook.) 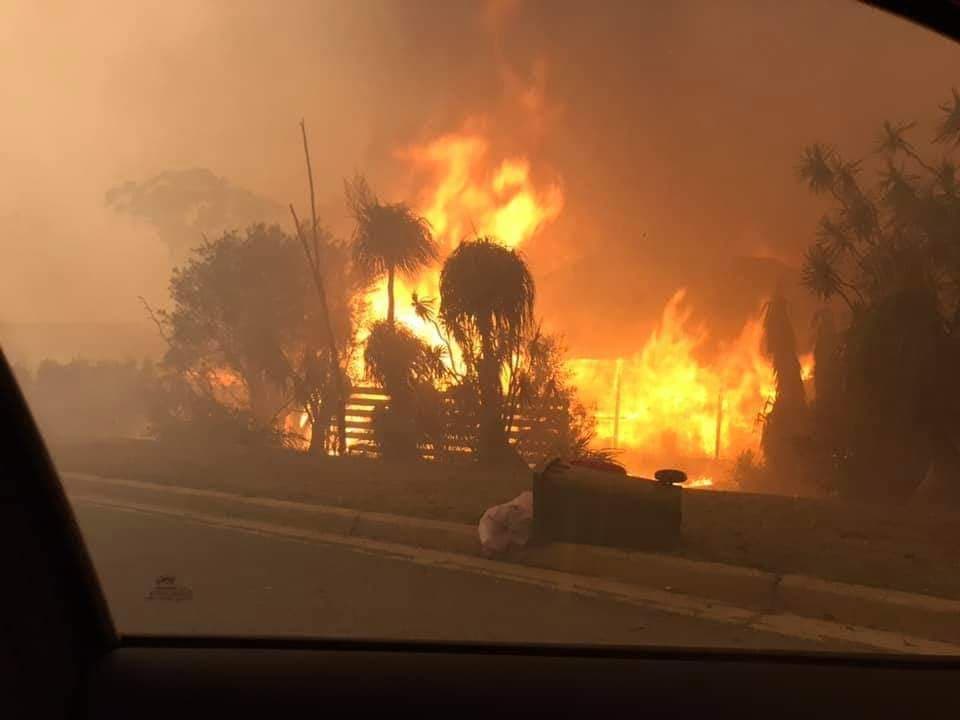 Fortunately, there was a wind change in the evening which pushed the fire front away from Lake Conjola, sparing most of the houses there. The weather today is cooler and less windy, which is good.

Unfortunately, there’s no power or communications available over much of the NSW south coast, and the Lake Conjola road is still cut by fire, so nobody there can get out. Food and water supplies are limited. My aunt only managed to get word to us that she’s safe by driving out towards the roadblocks to pick up a cell phone signal, before driving back to the town to shelter for tonight. The road is likely to stay closed for at least another 24 hours. But hopefully she’ll be able to get out tomorrow.

So for me it’s been another day of monitoring official news sources, and Facebook for news from my aunt. This story of people being trapped in coastal towns, with the only roads being cut by fire is repeated in several towns up and down the coast. There are large towns of several thousand people without power or cell phone access. And they’re starting to run out of food, clean water, and petrol. Even if the roads open and people can evacuate by road, there may not be enough fuel for all of them to drive out. Supermarkets are being cleaned out of food, with no supplies coming in. In some areas the water treatment plants have gone offline, and people are being told to boil all water before drinking or cooking with it. The navy has been mobilised to bring supplies to some of these towns by sea, and I expect there will be more of that tomorrow, as well as possible evacuations by sea.

In between I managed to write some more Irregular Webcomic strips. I should be ready to photograph this batch tomorrow.