The main thing about today was not anything I did, but the weather and the resulting fires across the Eastern parts of Australia. We’ve had out-of-control bushfires burning in various parts of New South Wales and Queensland since the weekend, and today’s weather was very hot and windy. The combination resulted in declarations of (a) total fire bans across all of NSW and Queensland, (b) “catastrophic” fire conditions in the Sydney and surrounding regions – the first time this warning level has ever been issued for Sydney, and (c) an official state of emergency in NSW from today, for the next seven days.

Over the past few days, several hundred homes have been destroyed by fire, and a handful of people have been killed by the fires. We expected the worst today, as temperature rose to 37°C in Sydney, and hotter in some rural areas, with very low humidity and high winds. Throughout the day as the temperature climbed, I kept up with the news, hoping not to hear of further tragedies.

While this was happening, I spent the morning back at the school I went to yesterday, working with a couple of the kids in the Science Club, to prepare a short slideshow presentation of the work we’ve been doing all year. The older kids in the Science Club are going to present the experiments we’ve been doing to the whole school at an assembly in a couple of weeks. They have a 15 minute slot, so I made sure to keep things tight, and helped them write a script to read from.

I was home around lunch time, and then began work on getting a result from our solar shadow measuring experiment, that the kids have been working on since May – recording the length of a shadow each day as the sun moves.

Later I went out with my wife and Scully to the pet shop, for some exercise, since it was a much cooler option that going to the park. We walked over to the hardware store as well, and a couple of other places nearby to buy a few odds and ends. Scully enjoys going to the pet shop, as there are so many interesting things to smell. But she was getting restless again early this evening, so I braved the heat and took her to the nearest park to chase a ball around for a while until she got exhausted. While we did this, I could see the smoke from the bushfires around Sydney drifting across the sky. 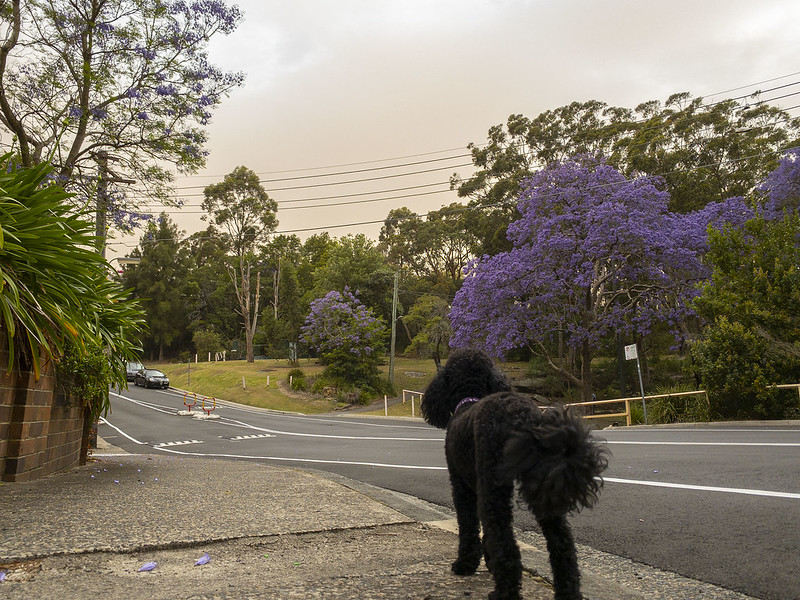 (This photo was walking home, not at the park.)